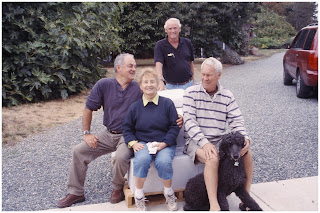 The challenging cool and wet 2007 vintage on Vancouver Island put all the wineries to the test. The Saanich Peninsula’s Starling Lane Winery mastered that challenge well to release remarkably-crafted wines.

This is one of British Columbia’s smallest wineries. It makes a mere 6,000 to 7,000 bottles a year Most is sold from the wine shop on a picturesque farm on Old West Saanich Road that once belonged to Sir Matthew Baillie Begbie, British Columbia’s first chief justice. He enforced the law so firmly that someone after his death dubbed him The Hanging Judge. That was briefly considered as a possible winery name before the three couples behind Starling Lane opened the winery in 2005

The couples are all gentleman farmers who are retired, or nearly retired, from various professions. They all planted two-acre vineyards in the 1990s. When they could not get a decent price for their grapes from a large winery, they formed their own winery.

The Begbie farm is owned by Victoria radiologist John Wrinch (who is the winemaker) and his wife Jacqueline. The other partners are Jerry and Sherry Mussio and Ken and Susan Houston. The skills of the six partners are conveniently complementary. Sherry is an artist who designs the labels; Susan does the books; Jacqueline runs the tasting room; Ken manages the cellar and Jerry does much of the marketing. Each couple looks after postcard vineyards planted carefully with varieties that can ripen on the Saanich Peninsula.

Pinot Noir is the only variety that really struggled here in 2007. Even with a very low crop on the vines, the berries did not get ripe enough to yield table wines as fine as the prize winners made in the two previous vintages. Starling Lane found a silver lining in this, turning its Pinot Noir into a classic sparkling wine.

I have been impressed with Starling Lane’s wines every since the winery opened. The current releases, mostly from 2007, do not retreat from the standards the partners have set for themselves. Because production is so tiny, most of the wines are sold out but they may be encountered in a few Victoria area restaurants.

Pinot Noir 2006 ($25). This dark wine begins with aromas of chocolate and black cherries. On the silky palate, there are flavours of vanilla, strawberry and cherry. The wine is rich and satisfying and unexpectedly big for a Vancouver Island Pinot Noir. 88+ points. Only 100 cases were made.

Pinot Blanc 2007 ($19). With the most tangy acidity of Starling Lane’s 2007 whites, this wine demands a plate of oysters. The wine begins with aromas of melons and shows green apple flavours. It has a clean, crisp and tangy finish. 86. Only 31 cases were made.

Pinot Gris 2007 ($19). This wine has the bouquet and taste of citrus, lifted by an alluring spiciness (possibly from a subtle use of oak barrels). The finish is clean, fresh and dry. 88. Only 68 cases were made.

Ortega 2007 ($19). This white is arguably the flagship variety on Vancouver Island because it ripens reliably to produce a fruity wine that – like this one – reminds one of Sauvignon Blanc. This wine begins with aromas of herbs, flowers and melons. On the palate, there are zesty grapefruit notes. It finishes with a refreshing crispness. 89. The winery made 142 cases.

Not tasted is the winery’s 2007 Maréchal Foch and its Blackberry Dessert Wine. Previous vintages of these two were among the best on the island.

Posted by JohnSchreiner at Goodgrog at 2:25 PM