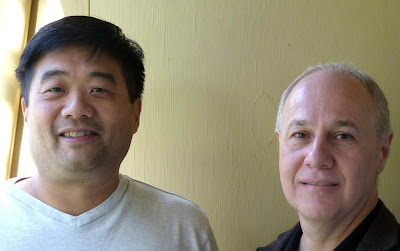 Bonamici Cellars is about to open a wine shop south of Okanagan Falls to complete its journey from virtual winery to land-based winery. There is a soft opening the first weekend in May but the official opening is scheduled for May 17, to run into the long weekend.

The shop is at 2385 Rolling Hills Road, on a property the owners of Bonamici acquired in 2016. It is in a burgeoning region for wine touring. Noble Ridge Vineyards and Liquidity Wines are just up the road while Blue Mountain Vineyards, Stag’s Hollow Winery, Wild Goose Vineyards, Meyer Family Vineyards and Synchromesh Wines are in the neighbourhood.

The winery is called Bonamici – Italian for good friends – because owners Philip Soo and Mario Rodi are old friends with shared passions for wine.

Mario, who was born in 1957 in northern Ontario, was just 12 when he started helping his immigrant Italian father crush grapes for the family’s wine. Philip was born in Vancouver in 1969, the son of immigrants from Hong Kong who were just discovering what little wine culture there was in at the time. “We had family celebrations but they never encouraged kids to drink,” Philip remembers. “I was 12 or 13 when my first sip of alcohol, Baby Duck, was at a Christmas party.”

It seems that was enough to get Philip interested. After getting degrees in microbiology and food engineering, he was offered jobs at a pharmaceutical firm and a company that produced gourmet salads but, having been a good amateur beer maker while in college, he took a job with a manufacturer of beer kits “because it was in line with my hobby.” Subsequently, Andrew Peller Ltd. bought this company along with a wine kit company. Philip was then promoted to Peller’s winery in Port Moody in 2000. When the winery closed five years later, he moved to the Okanagan to become a consulting winemaker after turning down an offer to work at Gallo Brothers in California.

Mario spent about 20 years in food and soft drinks sales before joining Peller in 1995 as general manager of Wine Experts, as the kit company was called. He and Philip, who reported to him, became close friends. Mario left Peller in 2009. Deciding to stay in the wine business, he proposed Bonamici to Philip. “He is a great winemaker,” Mario says. “I focussed on the sales and marketing for my entire career. I thought this might be an opportunity for us to get together and build something great.”

Taking advantage of a great vintage in 2012, they bought grapes from Philip’s favourite growers and contacted space in an existing winery to make about 1,000 cases of wine. Two wines were released initially, a red blend and a white blend.

Operating as a so-called virtual winery gave Bonamici several years to establish its brand.  Bonamici has offered award-winning wines, even while working in another winery’s facilities. It was, in fact, the only virtual winery to win a Lieutenant Governor’s Award of Excellence.

The partners spent the virtual years in developing their own winery. In 2016, they bought the 4.25-hectare (10.5-acre) property on Rolling Hills Road.  “We have a wonderful southern sloping aspect,” Philip says. “It gets full sun from morning to night.”

They planted one acre each of Sauvignon Blanc and Pinot Gris last year. This year, they are planting another two acres: Chardonnay, Pinot Noir and Sangiovese. Four acres remain to be planted, likely with red varietals.

“We are especially excited about the Sangiovese,” Mario says. “This is being grown specifically for our Belviaggio red blend which we will continue to model after the Super Tuscans.”

The Bonamici label, designed by Hired Guns Creative of Nanaimo, celebrates the friendship by depicting two individuals floating along in the gondola under a balloon. An added touch is the capsule which repeats the balloon motif.

“The label is a metaphor for two friends on the journey of building a great wine company,” Mario says. “It is an adventure for the two of us.”

This is the most charming new wine label from an Okanagan winery in some time. The charm triggered a spontaneous smile when I first saw it in 2013. It continues to have the same effect.

Here is a note on some of the current releases.

Bonamici Sauvignon Blanc Viognier 2016 ($19.25). This inspired blend is 65% Sauvignon Blanc and 35% Viognier. It begins with herbal aromas recalling Sancerre whites but with the backbone and structure and stone fruit flavours of Viognier. The finish is crisp and tangy 90.

Bonamici Merlot Cabernet Franc 2015 ($22). This is 58% Merlot and 42% Cabernet Franc; and the wine is nearly sold out. The wine begins with aromas of cassis and blackberry. On the palate, there are flavours of black cherry and brambly, dark fruit. 90.

Posted by JohnSchreiner at Goodgrog at 11:38 AM