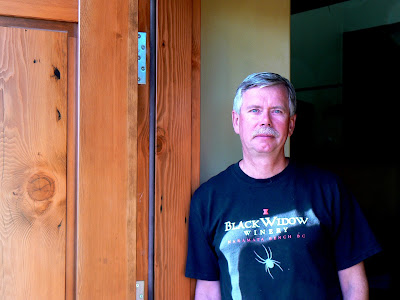 For my book, Icon: Flagship Wines from British Columbia’s Best Wineries, I chose a premium red blend called Hourglass as the iconic or collectible wine for Black Widow Winery.

That is not among the winery’s spring releases. As one would expect with a spring release, most of the wines are white (but with two fine reds).

On tasting the whites and the rosé, I learned two things:

·       The 2017 vintage wines are excellent.
·       And winemaker Dick Lancaster, who operates this winery with his family, get astonishing mileage from aromatic grape varieties.

For some background on the winery, here is text from John Schreiner’s Okanagan Wine Tour Guide.

In the summer of 2000, while looking for a getaway cottage with a few vines, Dick and Shona Lancaster saw this property on Naramata Road. At three hectares (seven acres), it was bigger than they were looking for but, with producing vines and a panoramic view of Naramata Bench and the lake, it was too good to turn down. “Classic up-selling,” Dick says of the realtor. “And as soon as we got a vineyard, the goal was to set up a winery.”

Born in Toronto in 1953, Dick grew up in Montreal and picked up an interest in wine from his father, Graham, a long-term Air Canada’s food services manager. Dick began making wine from wild grapes while still in high school. A three-month tour of European wine regions in 1976 sealed that interest. In Vancouver, where he and Shona lived from 1970 until moving to the Okanagan a few years ago, Dick was an award-winning home winemaker for more than 25 years.

You could call Dick a polymath, given all the skills he has acquired. Starting in biology, he earned a master’s degree. Disillusioned by the lack of well-paying jobs, he took a real estate course, then sold cars and became district manager for a leasing company. Then he got a master’s degree in business administration and finally qualified as an accountant. From 1992 until 2008, he was a vice-president with Imasco Inc., western Canada’s largest stucco manufacturer. Naturally, Black Widow’s gravity-flow winery, which he designed, in finished in tawny-hued stucco. “How can I not use stucco?” he laughs.

The vineyard already had Gewürztraminer, Pinot Gris and Schönburger when the Lancasters bought it. In 2001, they added Merlot and a bit of Cabernet Sauvignon, selling grapes until launching Black Widow in 2006. “We like wines that have some real flavour and character to them, and that comes from really ripe grapes,” Dick says.

The winery is named after the indigenous desert-dwelling spider that is, fortunately, so shy it is seldom seen. The insect should be avoided because the bite (only females bite) is highly venomous.

The spider has inspired many of the labels for the wines. Here are notes on the current releases.

Black Widow Pinot Gris 2017 ($23 for 505 cases). Made with estate-grown fruit, the juice was allowed to soak on the skins and then was fermented cool; some 15% was barrel-fermented in new French oak. That expresses itself only in the wine’s luscious texture. The aromas and flavours – pear, peach and apples – fill the mouth. The finish, with a hint of citrus, is refreshing. 91.

Black Widow Gewürztraminer 2017 ($25 for 125 cases). This is a full-flavoured Alsace style fermented dry, and it is all the more interesting for that, especially for those of us who find off-dry Gewürztraminer somewhat boring. This wine has aromas and flavours of spice, lychee and grapefruit, with a lingering finish. 92.

Black Widow Oasis 2017 ($23 for 460 cases). This is a blend of Schönburger, Gewürztraminer and Pinot Gris, all fermented separately in stainless steel. The wine has aromas of spice and grapefruit leading to flavours of peach, pear and grapefruit. The wine is aromatic but the finish is dry. 91.

Black Widow Muscat Ottonel 2017 ($25 for 105 cases). This wine is made with grapes from the Carpenter Vineyard, also on the Naramata Bench. It has delicate rose petal spice aromas. The initial delicacy of flavours shows remarkable intensity on the palate even though the wine is just 12.2% alcohol. The wine is finished just off-dry. 90.

Black Widow Sparkling Web 2017 ($24 for 230 cases). This is the winery’s second vintage of a dry, frizzante-style blend of Muscat, Gewürztraminer and Pinot Gris. It is a versatile wine: the bubbles make it festive while the dry finish makes it a good luncheon wine. The spicy tropical aromas and flavours are appealing. 90.

Black Widow Rosé 2017 ($25 for 60 cases). Made with Syrah and Merlot, this rosé has that rich dark cherry hue which, alas, is going out of fashion. But if the intent is to make a full-flavoured rosé – as was obviously the intent here – the juice needs serious skin contact. This wine has aromas and flavours of strawberry compote, with a lot of fruit sweetness on the palate. 90.

Black Widow Phobia 2016 ($29 for 400 cases). This wine is 60% Syrah and 40% Merlot, aged in barrel for 17 months. Dark in colour, it begins with an almost jammy aroma of plum and black cherry. On the palate, there are flavours of plum, black cherry, cassis with a hint of black pepper. 92.

Black Widow Red Back 2016 ($34 for 105 cases). This is a blend of Cabernet Sauvignon, Syrah and Merlot aged 17 months in barrel. It begins with aromas of mint and cassis. On the palate, the fruit flavours are vibrant, with notes of black currant. This wine expresses itself best when decanted and allowed to breath for several hours. 92.

Posted by JohnSchreiner at Goodgrog at 9:20 AM