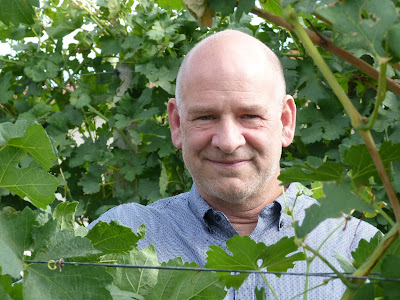 Moon Curser Vineyards co-founder and winemaker Chris Tolley seems to have a bit of a nightmare: that he could be making wine in Beaujolais with just one varietal.

“I would do horrible in Beaujolais,” he says. “The idea of knowing just one grape for my whole life ….” He lets that frightening [to him] thought hang in the air.

Life is different at Moon Curser. He works with numerous varietals, almost all estate grown and some fairly obscure in the Okanagan. These include Arneis, Tannat, Touriga Nacional, Dolcetto, Carménère, Tempranillo, Marsanne and Roussanne. There is not much chance of getting jaded as a winemaker with that array of grapes every harvest.

He also grows some varieties that are more mainstream in the Okanagan. “Syrah is something I always count on,” he says. “When it comes in, I like the grapes; I like the way they taste; I am all excited about it. We start fermenting it. It has these wonderful aromas. I taste it along the way. We put it in barrel. I am happy with it … I am happy the whole time. Every wine should be that.”

In late summer, I had a leisurely tasting with Chris. Because I got sidetracked by other commitments, to say nothing of a month in Spain, it has taken me some time to write up the notes. Many of these wines are now sold out at the winery. However, both the wines and his comments were so interesting that I am offering my notes all the same.

Moon Curser Arneis 2016 ($22.52 for 269 cases). The winery has an acre and a quarter of this variety from northern Italy. In 2016, Chris picked the grapes at a slightly lower ripeness than in previous years to produce a crisper white, more in the northern Italian style. The aromas are floral, with notes of melon and citrus. It has flavours of melon and green apple, finishing with a crisp, refreshing character. 91.

Arneis is a variety that Chris is still getting his arms around. “In the winery, I am always wondering exactly what I am doing,” he admits. “This took a month to ferment. We fermented it a little cool and with a new yeast. That is a whole new game, trying to find a yeast to match up with Arneis. They [the yeast suppliers] don’t suggest one. It was never close to being stuck but it was one of those wines that gave you no satisfaction to make. Once it is made and you taste it, and once you receive some feedback, you realize there is good quality there.”

Moon Curser Afraid of the Dark 2016 ($19.04 for 577 cases). The blend is 45% Viognier, 40% Roussanne and 15% Marsanne.  The grapes are fermented separately and blended later, to be aged in stainless steel. This is one of Chris’s favourite wines; he is perplexed that it is a perennial silver medal winner but rarely a gold medal winner. I would suggest that competition judges are fickle, or just not exposed to enough Rhone white blends. This is a luscious and fleshy white with aromas and flavours of apricot and nectarines. 91.

Moon Curser Dolcetto 2016 ($23.39 for 407 cases). This Italian variety, widely grown in Piedmont, was planted by Moon Curser in 2013. This wine was from the first full crop. It is an opulent, ripe, unoaked red, with aromas of cherry and strawberry. On the palate, the cherry and strawberry notes are joining with flavours of black currant jam. In short, a delicious fruit bomb. 92.

“Dolcetto is one of my most favourite varietals,” Chris says. “I know it is not a very big wine in Italy, in terms of body. It can be. It has colour and intensity galore. They have short fermentations and they don’t do it in oak either.”

Moon Curser Carménère 2015 ($ for 297 cases). This varietal is so popular in the Moon Curser portfolio that Chris has mused about converting his entire vineyard to Carménère. The grape almost went extinct in its native Bordeaux. After phylloxera   devastated the vineyards, it was not replanted, perhaps because it ripens late. The reputation was re-established in Chile. There are at least three producers in the Okanagan. The wine begins with aromas of black currant jam and pepper. Generous in texture and weight, it has flavours of black cherry, pomegranates and vanilla, punctuated by a peppery note on the finish. 92.

“I do like the wine quite a bit,” Chris says. “It is a nice varietal. I think this is what they sort of expected to get in France before they pulled it out. They decided in their hotter vintages to let the Cabernet Sauvignon and Petit Verdot do the talking. In the cooler vintages, they needed the Merlot and Malbec. The Carménère? In the hotter seasons, its power wasn’t needed and in the cooler season, it detracted from the blend with its vegetal characters.”

The succession of warm to hot vintages in the Okanagan since 2012 enabled Chris to make a powerful Carménère year after year.

Moon Curser Syrah 2014 ($23.39 for 1,008 cases). Chris believes this wine, reflected a very good vintage, was the best Syrah he had made. It is an elegant and concentrated red, with aromas of black cherry, spice and pepper. On the palate, the dark fruit flavours are meaty and earthy. 92.

Moon Curser Syrah 2015 ($23.39 for 1,188 cases). This is a bold and juicy wine, with aromas of black cherry, pepper and mocha. On the palate, there are flavours of black cherry, fig and licorice punctuated with subtle notes of pepper. 91.

“2014 is probably the finest Syrah we have ever done,” Chris says. “It was a great year. 2015 was not a bad follow up.” The only issue with 2015 was that smoke from forest fires created a risk of smoke taint. Alive to that danger, Chris pressed the Syrah from the skins at the end of fermentation rather than giving it a long maceration. The wine is marginally lighter than 2014 but the flavours are correct.

Moon Curser Border Vines 2014 ($23.39 for 1,021 cases). The blend is 40% Cabernet Sauvignon, 20% each of Malbec and Carménère, 14% Merlot and 6% Petit Verdot. This is a harmonious, well-integrated blend with aromas of cassis and vanilla, leading to flavours of black currant and black cherry. There is a touch of spice and leather on the finish. 92.

Moon Curser Border Vines 2015 ($23.39 for 888 cases). The blend here is 50% Cabernet Sauvignon, 39% Malbec and 11% Carménère.  In former times, this wine was called Six Vines because it was a blend of six Bordeaux varietals. It now focuses on just three varietals, in part because Chris had no Merlot available in the 2015 vintage. However, the wine tastes as good as ever. It begins with aromas of blueberries, black currants and mint.  It is somewhat lighter in body than the 2014 because, to avoid smoke taint, Chris did not macerate the Cabernet Sauvignon on the skins after fermentation. The wine is still rich with flavours of black currant and black cherry and absolutely no hint of smoke. 91.

Moon Curser grows no Merlot. When Chris was developing the estate vineyards, he chose to plant varietals that almost no one else grows. Merlot? Well, it is the most widely planted red in the Okanagan. The supply once seemed inexhaustible. In the last few vintages, the demand for wine grapes has more than caught up with the supply and it has become difficult to get Merlot.

Moon Curser Cabernet Sauvignon 2014 ($37.30 for 243 cases.) This densely structured wine – a classic age-worthy Cabernet – begins with aromas of cassis and blackberry. On the palate, there are flavours of black cherry and black currant, along with black olives, leather and dark chocolate. 92-93.

Moon Curser Tannat 2013 ($37.30 for 100 cases). The Tannat grape, whose historic home is southwest France, is the primary red in Uruguay and is being planted in a number of other wine growing areas. Moon Curser describes it as “a robust and intense grape variety.” This is a dark, concentrated wine with aromas of plum and vanilla. On the palate, the dark fruit flavours (figs, raisins) are something of a liquid fruit cake. 93.

“I really like the Tannat,” Chris says. “I could see doing a lot of Tannat but you would need a big maturation program. I could not see releasing it really young.” He described the 2016 Tannat, still maturing in barrel, as “grippy” because the tannins have not yet matured.

Moon Curser Dead of Night 2015 ($37.30). This is a blend of 50% Syrah and 50% Tannat. Dark and almost jammy on the palate, this wine reflects a big, ripe vintage. It has aromas and flavours of dark fruit, including figs. The rich flavours linger a long time on the palate. 94.

“I did not think of blending Syrah and Tannat when we first started,” Chris says. “Beata [his wife] asked me to. I did and found there is a bit of synergy there. I always thought of  using Cabernet Sauvignon, as they do in Madiran. But I find Syrah and Tannat blend beautifully together. Syrah seems to take the edge off the Tannat and Tannat takes up the intensity level. It ages incredibly well. We end up with a pretty decent aging wine.”
Posted by JohnSchreiner at Goodgrog at 8:46 AM