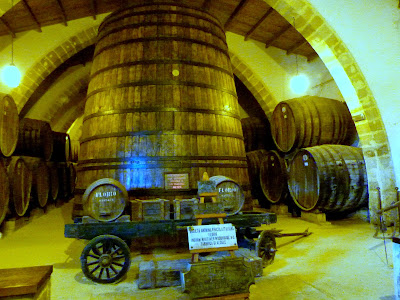 Before the 1943 Allied landing in Sicily, the Americans softened up the enemy by bombing Cantine Florio, Italy’s oldest producer of Marsala wines.

From the air, the sprawling Florio cellar looked like a strategic target, given its location beside the ocean and near the railroad station. One can imagine the chagrin of General Patton’s troops when they arrived in Marsala to discover that the bombs had destroyed thousands of litres of wine.

Only a small quantity of wine from 1939 and 1941 remain today at the winery, available to collectors with deep pockets. Even in a time when Marsala wines no longer enjoy the fashion of earlier times, these precious and long-lived vintages sell for more than $1,000 a bottle.

The credit for developing Marsala generally goes to an English trader named John Woodhouse. He sailed into the port of Marsala in 1773 and discovered a wine being made there somewhat similar to Madeira and Sherry. He fortified the local wine and sent a shipload to England. The wine was so successful that he established his own blending centre in Sicily. His success attracted other English wine merchants to Marsala as well.

In 1833, a Palermo pharmacist and entrepreneur, Vincenzo Florio, set up the first Marsala winery owned by an Italian. Florio, who was originally from northern Italy, became a powerful businessman. In addition to the winery, he owned a shipping line, a fish processing business, a ceramics factory and extensive real estate. Eventually, he bought Woodhouse’s business.

In 1906, Vincenzo sponsored the Targa Florio, the world’s oldest sports car race. It is still being run every year near Palermo.

There also is a suggestion that he backed General Giuseppe Garibaldi, who began his campaign to unite Italy by landing with his troops at Marsala in 1860. Today, the Florio cellars have a Garibaldi memorial, including a number of rifles that the general have given to Vincenzo.

The Florio family had the usual problems with the third generation. Vincenzo’s grandson proved to be a playboy. By the 1920s the winery was acquired by Cinzano. It changed ownership again in 1998 and is now part of a large private wine group which includes table wine producers Corvo and Duca di Salaparuta.

Florio remains a leading Marsala producer and its cellar, which was grandly rebuilt after the war, is one of the top winery tourist attractions in the small city of Marsala.

The wine, Marsala, was the first in Italy – in 1969 – to get its own DOC (Denominazione di origine controllata). The regulations specify where the wines can be made in Western Sicily and from what grape varieties. The major variety is Grillo, a thick-skinned white grape that also yields remarkably good table wines.

Depending on how the wines are made and how long they are aged, Marsala styles range from bone dry to sweet. The basic wine is designated Marsala Fine, an unfortunate term that implies the wine is indeed fine. In fact, it is a wine aged only for a year. “It is too young for tasting,” Florio tour director Valentina Gambino asserted. “This kind of Marsala is good only for cooking.”

If the British Columbia Liquor Distribution Branch is typical, this is the only Marsala you can find on liquor store shelves these days.

At a recent tasting at the winery, the tour group started with an excellent nutty dry Marsala aged eight years. The wine has an unfortunate name (at least for the North American market) of Terre Arse, which means a field dried by the sun.

The contrasting style was illustrated with Targa, a semi-sweet Marsala with six years of age. Its name was inspired by the car race.

Fortified to about 19% and exposed to oxygen while aging in vats or barrels, Marsala is among the most long-lived of wines. It is also a sturdy wine that can be opened and consumed gradually over several years without any deterioration of flavour. Marsala pairs well with food and is especially good as an aperitif. And consumers need to rediscover their Marsala palates because there is a lot of it available, usually at reasonable prices. Cantine Florio currently is aging about six million litres.
Posted by JohnSchreiner at Goodgrog at 4:56 PM

It was my misfortune to ask for a glass of Marsala on my LAST evening in Sicily. The very friendly waiter proceeded to list 8 different offerings. Confused, I said please bring me something that is most popular, something akin to house wine. The glass of wine arrived and then I had my OMG moment. This wine had nothing in common with the 'boat gas' we get in BC, it was astonishing in aroma, a complex blend of fresh fruit mixed with dried fruit and nuts. The flavour profile was every bit as intriguing, with a long luscious finish. The wine was lightly sweet but had big mouth feel. I am planning another trip to Sicily and this time first on my list is Marsala!