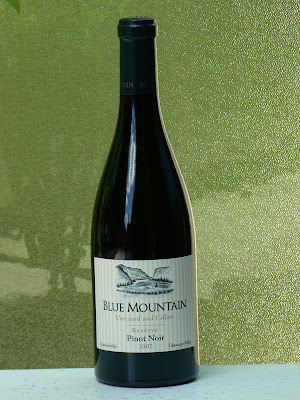 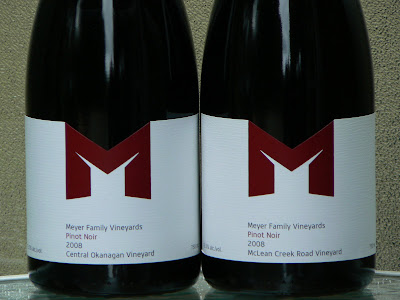 There was a time when British Columbia’s elite Pinot Noir producers could be numbered on the fingers of one hand.

That’s no longer so. Perhaps it is a coincidence but ever since the movie, Sideways, gave a major boost to Pinot Noir sales, more and better Pinot Noir wines have begun to show up from our domestic producers.

One of the new entrants to the Pinot Noir sweepstakes is Meyer Family Vineyards, which opened in 2008 as a Chardonnay specialist. Unfortunately for Meyer and all the other wineries making equally elegant Chardonnay, no one has gotten around to making the Chardonnay movie yet. While Meyer has been selling out its two Chardonnays, the winery has never produced either in large volumes.

Two things happened in late 2008 to move winery owner JAK Meyer beyond his initial ultra-boutique strategy. Firstly, he was able to hire Chris Carson, an Edmonton native who had learned to make wine in New Zealand and then returned to Canada with a resume that JAK could not resist. Chris had some serious experience making Pinot Noir, so JAK quickly lined up the necessary grapes.

Secondly, JAK was able to buy an established vineyard in Okanagan Falls which was growing, among other varieties, an acre and a half of Pinot Noir. This year, Meyer pulled out Gamay and Cabernet Franc to plant another five acres of Pinot Noir in what the winery calls its McLean Creek Vineyard.

This summer, Meyer has begun to release its first wines, one of them a Pinot Noir, from McLean Creek.

The Okanagan Falls region has a track record for Pinot Noir. The producers in the region already making this variety successfully include Stag’s Hollow, Noble Ridge and See Ya Later Ranch. Of course, the most established Pinot Noir producer here is Blue Mountain Vineyard & Cellars, which opened its doors in 1992 with Pinot Noir.

By coincidence, I had a bottle of Blue Mountain Pinot Noir Reserve 2007 on hand. So I tasted it about the same time that I tasted the two Meyer Pinot Noirs, both from 2008 (only one has been released). Blue Mountain is still the champion but Meyer is worth keeping an eye on. Chris Carson did not have full control of the grapes in 2008. I am pretty confident he began raising the bar in 2009 when he was in control the entire season. Almost more than any other wine, Pinot Noir is made in the vineyard.

Before getting to those wines, let me mention two other Meyer releases. The 2009 Meyer Gewürztraminer ($22) is from grapes still growing in the McLean Creek Vineyard. This is a wine with attractive lychee and citrus aromas and flavours, finished in a dry style but with a good concentration of fruit. 88.

The winery made only 150 cases of 2009 Gamay Rosé ($20), presumably from vines that have now been replaced with Pinot Noir. This wine has intriguing smoky, strawberry aromas, juicy strawberry flavours and dry finish. 87.

Now to the Pinots.

While Blue Mountain released its Pinot Noirs several months ago, both the regular and the reserve are still available. There was a time when these wines were snapped up in a matter of weeks. Now that there are more Pinot Noirs available, consumers seem to be taking their time.

Blue Mountain Pinot Noir Reserve 2007 ($35.90) is a deep ruby-hued wine with aromas of cherries. It is a concentrated wine with the velvet texture some of us look for in Pinot Noir; yet it also has the fine ripe tannins that give the wine plenty of cellar time (at least seven to 10 years). It has flavours of cherries and strawberries well integrated with toasty oak notes. This wine was retasted after being open for a day; it had become generous in texture and more juicy in flavour. Decant this wine. 92.

Meyer Family Vineyards McLean Creek Pinot Noir 2008 ($40) is a dark-hued wine and is somewhat more muscular in style than Blue Mountain Only 150 cases were produced. It begins with aromas of cherries, raspberries and nutmeg (the latter is probably a barrel note that adds complexity). The fruit flavours are full and ripe, with hints of cherry and even chocolate. 88-90.

Meyer Family Vineyards Central Okanagan Pinot Noir 2008 ($40 when released in October). This dark, robust Pinot Noir has been given extra bottle age before release to give it the appropriate time to develop. It has spicy, jammy aromas of sweet fruit. On the palate there are flavours of plum and black cherry. The fruit is so concentrated that the wine seems almost porty even if the alcohol is a reasonable 13.5%. This is a bottle that will reward patience in the cellar. 88-90.
Posted by JohnSchreiner at Goodgrog at 4:37 PM

John,
I very disappointed in the Meyer Central Okanagan Pinot Noir for two reasons. Firstly, from a varietal perspective this wine is so far removed from anything 'Pinot like' I was shocked they labeled it a straight varietal pinot. The nose was more telling of a syrah or even the dreaded marechal foch. I know for a fact that some winemakers choose to slip a little, (usually <2%) of a more robust varietal into their final pinot noir blend but this seems to be closer to the maximum permitted 15% addition (BC, like most new world wine producing countries requires, by law, that 85% of the total wine by volume must be derived from that varietal) and has destroyed the more subtle pinot aromas, masking them with, like you said "jammy aromas". On the palate, I gave it a much less glamorous description but again we agree on a point; "the wine seems almost porty" - hardly a typical descriptor of a varietal pinot noir priced at (cough) $40. Secondly, from a standalone wine (varietal and price aside) perspective I found the wine to be sappy, have green, stemmy tannins and have a disjointed, course mouth-feel. I feel the score you gave was extremely generous and I was curious as to whether you taste these wines blind? But hey, wine is subjective and everyone is entitled to an opinion. My score would be more like 79 - 82, with the 82 being where the wine could hope to be in 3 years when some of those green stem tannins drop out.