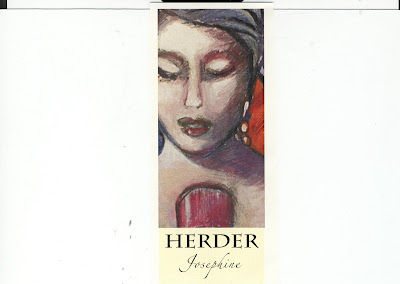 The flagship wine at Herder Winery & Vineyards is its Bordeaux blend, which the winery calls Josephine. The current release, made with Merlot, Cabernet Franc and Cabernet Sauvignon, is from the 2007 vintage.

When winemaker Lawrence Herder was putting together the blend for the 2008 Josephine, he also had Malbec and Petit Verdot available. When he made a blend, he decided that the style strayed too far from the profile that Josephine’s fans have come to expect.

What to do? He left the formula for Josephine basically unchanged. To use up the Malbec and the Petit Verdot, he made a Meritage and he bottled some Malbec on its own.

This has turned out to be win/win for Herder’s customers. The Meritage sells at half the price of Josephine, delivering terrific value. The Malbec is so tasty that, alas, it is already sold out.

Since opening in 2004 in the Similkameen Valley, Herder Winery has attracted a cult following. That was driven in part by the aggressive Vancouver agent that the winery employed for a few years but mostly it was a response to the interesting wines made by Lawrence, a high-energy graduate of Fresno State wine school and the owner of a winery in Paso Robles before coming to Canada early this decade.

Lawrence and Sharon, his wife, have been a major force in the development of Similkameen vineyards and wineries. Lawrence has been involved as a consultant or vineyardist in at least half a dozen wineries, stretching himself to the point where a cardiac problem showed up (and has been corrected).

In the last year, the Herders have removed a few things from the plate, concentrating primarily on limited volumes of premium wines. Much of it is now sold directly from the winery or over their website.

Judging from the satisfying tasting experiences delivered by the winery’s current releases, this is a good strategy.

Herder Pinot Gris 2009 ($17) re-establishes this winery (after a weak 2008 Pinot Gris) as a master of the variety. Refreshing and crisp, this wine begins with aromas of citrus and apples and delivers luscious flavours of pear and white peach. The fleshy weight on the mid-palate suggests the result of carefully monitored time on the lees. The finish lingers. 90.

Herder Twin Benches Chardonnay 2007 ($35) announces that it is a serious wine by coming in an extravagantly heavy bottle. Dress to impress … and impress it does. The buttery tangerine and tropical aromas soar from the glass. On the palate, there are tangerine and nectarine flavours framed subtly by light, toasty notes of oak. This is an elegant and powerful Chardonnay. 89-91.

Herder Malbec 2008 (NA). Snap it up if you find this wine on a restaurant wine list. It begins with rich aromas of plum, black currant and chocolate. Full on the palate, the flavours are lit up by notes of spice and red plums, with more spicy fruit on the finish. 90.

Herder Meritage 2008 ($20). This is a 9,200-bottle blend of Merlot (70%), Cabernet Franc (15%), Cabernet Sauvignon (10%), Malbec (3%) and Petit Verdot (2%). The wine, aged in French and American oak for 16 months, is a good honest drink at a great price. Medium-bodied, it begins with attractive berry aromas and delivers flavours of currants, with a hint of chocolate. The tannins are firm enough to allow cellaring this wine for another five years. 88.

Herder Josephine 2007 ($39). This is a blend of Merlot (66%), Cabernet Franc (21%) and Cabernet Sauvignon (13%). The Cabernet Franc delivers typically attractive brambly aromas to a wine that is packed with sweet fruit on the mid-palate, flavours of plums, blackberries, with a hint of mocha. This is a big satisfying red that is drinking well now but clearly has good potential to age. 92.
Posted by JohnSchreiner at Goodgrog at 9:11 PM

There is a discrepancy somewhere. The wine label has the figures I used.

I have now confirmed that the label is correct. The winery had the specifications for the 2008 Josephine on its website and has now corrected that posting. The information in my blog is accurate.