B.C. wines may have hit a price ceiling 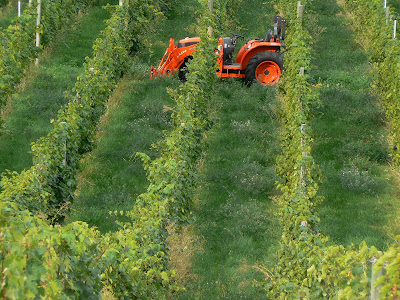 
Two things struck me the other day during flights to and from Kelowna on Westjet:

1. There were empty seats on the aircraft.

2. And the cabin staff, for the first time ever in my experience with Westjet, cracked no jokes.

Signs of a tough economy, perhaps?

Another place where they are not cracking a lot of jokes these days is within the wine industry. Despite the Olympics, most of the wineries are not selling wines as fast as they used to; nor are they getting as much for the wines.

“This has been a tough market in which to sell wine,” CedarCreek Estate Winery president Gordon Fitzpatrick says. “In these days, you have to work harder and smarter.”

The evidence of a weakening price is contained in the newly-released annual report of the British Columbia Wine Institute for 2009-2010.

That average has risen almost without interruption since 1991-92, when it was $6.86, peaking in the 2009 fiscal year at $18.19. In only two previous years since VQA began have there been declines in the average price; and those were very minor.

A decline of 65 cents a bottle is substantial and no doubt troubling to producers. As I watch the price adjustments that some wineries continue to make quietly, I think that the average will drop for a second year in a row.

On the plus side, the overall sales of BC VQA wines have risen every year since VQA began 20 years ago. In the year ended March 31, 2010, the sales totalled $182 million, up 11% from the year before. It appears that some wineries are making up in volume for what they are losing in average value.

I suspect there are a couple of explanations. Most notably, more wineries than ever have joined the VQA program, primarily to get their wines into the 19-store chain of VQA wine stores. Those stores sold eight per cent of all VQA wines last year. Access to consumers through that channel, along with the Liquor Distribution Branch and private wine stores, offset the apparent declines in orders from restaurants. In the economy of 2009, many restaurants chose to sell down their wine cellars.

The perceived economic downturn of 2009 (which may have extended into 2010 for some people) seems to have caused wine consumers to reconsider how much they spend on wine.

Anecdotal evidence suggest that consumers, who had begun to grumble about B.C. wine prices in 2008, began acting on those complains in 2009 by shopping harder for “value” and finding it among wines from Argentina, Italy and the Cellared in Canada segment.

British Columbia wines still have the biggest share of the B.C. wine market. VQA wines had 19 percent of the market in the year to March 31, 2010, and the Cellared in Canada non-VQA wines had 25% of the market. Australia at 13.46% was a distant third.

Those figures show that the B.C. wine industry still retains that impressive consumer loyalty earned over 20 years of VQA. However, the fact that Cellared in Canada wines outsell VQA wines shows that consumers are shopping for inexpensive wines they identify with B.C. wineries. Most of these wines sell for less than $10 a bottle.

Producers of VQA wines will need to be agile going forward. Currently, there is a surplus of VQA wine on the market, not so much from consumer resistance (there is not that much yet) but from added production that has come from all the new wineries and vineyards that have been developed. Older vintages are beginning to stack up on wine store shelves – 2008 rosés when the 2009 rosé wines should be on the market.

Other anecdotal evidence points to a surplus of grapes this fall. One top-flight grower, for example, was recently looking for Vancouver Island wineries to buy some of his grapes.

If it is challenging for wineries, it is a good time to be a consumer. For example: CedarCreek has just made significant reductions in the price of three of its 2006 Platinum Reserve wines. The Meritage and the Merlot each are cut by $10 a bottle, to $35 and $30 respectively while the Pinot Noir is reduced $5 to $35.

These are excellent wines. The strategy is to clear them from the shelves to make room for the 2007 Platinum Reserve wines, which have entirely different labels. Having them side by side would confuse consumers.

It happened that, after a small volume vintage in 2005, the 2006 vintage was abundant in the Okanagan and the quality was high. CedarCreek decided to increase its production of Platinum Reserve wines. Since it takes at least two years before big reds like that are market-ready, those 2006 wines arrived about the same time as the global financial crisis. That’s why they have hung around a little longer than expected.

“We’re selling the vintages that we should be selling,” Fitzpatrick adds. The winery began adjusting its portfolio to market conditions about 18 months ago, producing more wines at price points below $20 and fewer wines at premium price points.

Established wineries like CedarCreek have the resources and the marketing reach to adjust to the current wine markets. That may not be so for everyone in the industry.
Posted by JohnSchreiner at Goodgrog at 4:47 PM