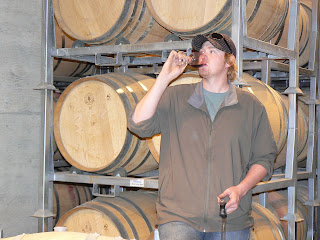 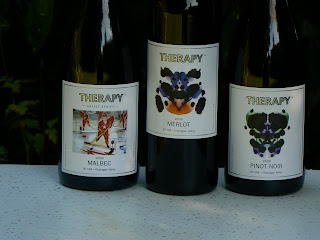 In the past year, several important changes have occurred at Naramata’s Therapy Vineyards.

Secondly, Therapy completed a new winery about four times the size of jam-packed previous winery. This gives Therapy, which is making about 10,000 cases annually now, the capacity to grow to 15,000 cases.

Thirdly, the winery’s latest releases include a wine – its first Malbec – with a label that has nothing to do with psychoanalysis theme that Therapy explores on most of its labels. Artists were asked to submit label ideas on a winter sports theme. The winning art shows hockey players, in what may well be the first time, surprisingly, that there has ever been a hockey figure on a Canadian wine label (excluding private labels).

Therapy was launched in 2005 by an investment group led until 18 months ago by an Alberta businessman, a leading member of the Opimian Society. A nasty fallout among the investors in the summer of 2008 led to a management restructuring.

Judging from recent tastings of Therapy’s wines, whatever was happening at the front of the house caused no damage in the cellars. The wines, made by Marcus and finished by Steve, remain solid.

Steve was born in 1982 new Prince Edward County in Ontario and worked at a dairy farm before enrolling in the winemaking program at Niagara College in 2001 – before he was old enough to drink legally. Graduating in 2004, he joined the Jackson-Triggs winery in Ontario and worked in a number of the Vincor vineyards there.

He moved to the Okanagan in 2007, tasted at almost every winery from Osoyoos to Kelowna and left his résumé at every place where he liked the wine. Several wineries called him. He took a job at Lang Vineyards because he and winemaker Bernhard Schirrmeister “hit it off.”

Therapy recruited him during the 2008 vintage. “Everything was a nice fit for me here,” Steve says. Indeed, what winemaker would not want to a place with a good reputation and a new winery?

There was not a lot of room for expansion at Therapy’s compact site. The previous owners of this site, when it was the original Red Rooster Winery, simply moved to a much larger property on Naramata Road. Therapy’s owners found room for the new 7,500 square foot winery by removing a block of underperforming Merlot vines. The tasting room, while remaining in the previous building, has also been enlarged.

The winery’s barrel cellar – there currently are 450 barrels here - is dug into the hillside, a design that harnesses the earth to insulate the building. The tank cellar has high ceilings to accommodate slender tanks. And there is a top floor for a spartan set of offices. In sum, a functional winery.

The latest releases include three reds from 2008. Here are notes on those and other recently tasted Therapy wines.

Therapy 2008 Merlot ($26). Dark in colour, the wine begins with appealing aromas of plums and blackberries. It is a full-bodied wine, firm but accessible, with flavours of black cherries, blueberries, mocha chocolate. I tasted this over several days and found the wine, which has a screwcap, opened up, releasing more sweet fruit flavours as the tannins softened. 88

Therapy 2008 Pinot Noir ($26). This wine has aromas and flavours of cherries, with a juicy texture. The fruit flavours are bright but the wine is still doing that Pinot thing of going through cycles. It was generous in one September tasting but finished short in a more recent tasting. Patience. 85

Therapy 2008 Malbec ($22). The winemaking notes on Therapy’s website say that the wine was made somewhat in the style of a “Pinot Noir with a medium body.” It beats me why anyone would sacrifice body and concentration when the big Argentine Malbecs constitute the benchmark for most consumers. The bright spicy fruit flavours have charm even if this is atypical for Malbec. 86

Therapy 2008 Chardonnay ($25). This is a delicious wine with citrus flavours and a tangy finish but also with richness and a note of butterscotch produced during fermentation and barrel-aging. 88

Therapy 2008 Freudian Sip ($19). This is a rare blend of Riesling, Kerner and Pinot Gris. The wine has aromas and flavours of citrus, melons and green apples with a crisp flinty finish. 89

Therapy 2008 Pink Freud ($19). While we are close to the end of the rosé season, there might still be a few bottles of this around. The wine was made by bleeding some juice from freshly crushed red varieties and co-fermenting the juice. The result: a refreshing charmer with strawberry flavours and with a crisp, dry finish. 88

Therapy 2007 Freud’s Ego ($20). This is 60% Cabernet Sauvignon, 35% Cabernet Franc and 5% Merlot. It has aromas of mint, red berries and oak. It has sweet flavours of plum and black cherry and currants, with long ripe tannins. 88

Therapy 2007 Super Ego ($37). This big, bold red, with flavours of currants, plum, chocolate and tobacco, is the red blend taken to another level. This is 63% Cabernet Sauvignon, 23% Merlot, 10% Cabernet Franc and two percent each of Petit Verdot and Shiraz. This is a fleshier blend and a more complex one. 89-91
Posted by JohnSchreiner at Goodgrog at 11:34 AM

John - (or anybody else reading this who can assist me....)

Would you please contact me? My email address is LifeCoach67@gmail.com

I'm trying to find a way to surprise my uncle and get hold of some Okanagan or other BC grapes before the end of the season.

Any help or direction would be greatly appreciated!

I heard there was a significant frost in the south Okanagan about a week ago. Any news on the impact on the late ripening reds?