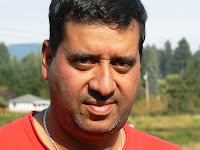 
The Cowichan Valley’s newest winery, Deol Estate Winery, opened quietly last Saturday. It is the seventh British Columbia winery operated by an East Indian family; and there are others under development.

This is the classic story of immigrants who, after doing hard scrabble work when they arrived in British Columbia, are now part of the main stream of the province’s vibrant wine industry.

By a remarkable coincidence, Deol is the third winery owned by East Indian immigrants to open this year. Kalala Organic Estate Winery opened in July in Westbank. Chandra Estate Winery near Oliver began selling wines this summer but plans a grand opening next spring.

Surgit Deol’s family immigrated to Canada from the Punjab in 1980, and spent a few years in the Cowichan Valley before moving to Oliver in 1982. As Surgit’s son, Gary remembers, there were perhaps four East Indian families there at the time. Today, he estimates that 300 live there and a number of adapted their Punjabi farming skills to growing grapes. In a growing number of examples, this has progressed to opening well-regarded wineries.

In the 1980s, the Deols, in addition to operating their own orchard, worked in some of the leading vineyards in the south Okanagan. When the searing Okanagan sun caused some health problems, they decided to return to the more moderate Cowichan Valley.

In 1999, the family bought a former dairy farm north of Duncan and, starting the following year, developed a 23-acre vineyard (Gamay, Maréchal Foch, Pinot Gris, Pinot Noir, Chardonnay and a few odds and sods). They have been selling grapes to other Vancouver Island but in 2007, looking to extract more value from their farm, they kept back enough fruit to make 1,600 cases of wine.

The cool, wet 2007 vintage on Vancouver Island challenged vineyards trying to ripen wine grapes. The winery owners turned this to an advantage. Rather than make insipid reds from the Gamay and the Pinot Noir, they made a refreshing rosé with the Gamay and a crisp white wine with the Pinot Noir. They froze the Chardonnay grapes and then made an Oregon-style icewine.

Maréchal Foch, the workhorse of Vancouver Island, seldom fails to ripen; so the winery was able to make a full-bodied, barrel-aged red.

All the wines are available currently in a tasting room that the Deol family has built in a renovated century-old farm house. Like the family and like the wines, it has a warm, unpretentious ambiance.

Posted by JohnSchreiner at Goodgrog at 9:08 PM