California Cult Classics lures a rising star from the Okanagan 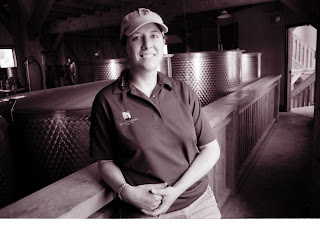 If the career move seems surprising, it actually makes sense: she will be making wines some of the finest grapes from California, an opportunity not available to her unless she moved there.

California Cult pays $6,000 a ton and up to buy grapes from the same vineyards, including Napa's Beckstoffer Vineyards, that grow for a number of the cult wineries in Napa. "Kelly and I share the same vantage point on winemaking," says Frank Gigliotti, who founded California Cult Classics in 2005. "She loves those big booming California wines that we make here."

A self-taught winemaker with 23 vintages behind him, Gigliotti recruited a professional so that he has more time to market his business. "I didn't ask her to join us to become a cellar rat," he says.

Located in an anonymous industrial mall in North Vancouver, California Cult operates under the stringent U-Vin license. Producers under that license must ensure that their customers take a role in making the wine - wine made for personal consumption and not for sale. California Cult has about 300 members who subscribe for wine by the barrel (or by quarter barrels). The members participate in various stages of making the wine, from adding the yeast to bottling the finished wine; and they take possession of the wine immediately on bottling it.

But there is plenty of room for a hands-on winemaker to help the members produce wines of professional quality. "She can bring a lot of skills to us that we don't have," Gigliotti says. During California Cult's first year, the professional in the cellar was Ray Signorello, the West Vancouver resident with a couple of Napa wineries.

Symonds is a rising star in British Columbia winemaking. A dentist's daughter, she was born in Abbotsford in 1977. She was studying science at university when her mother gave her a wine appreciation course. After a summer job at Sumac Ridge’s wine shop, she got a bachelor’s degree in enology from the University of Adelaide in Australia. In February, 2003, a few months after graduating, she became the cellarmaster at Hillside and, after taking increasing responsibility from Hillside’s consultant, became winemaker in 2005.

Hillside is a Naramata Bench winery that produces about 10,000 cases a year. "We make about a quarter of that," Gigliotti says.

Kelly is helping California Cult make the Chardonnay and Pinot Noir from grapes that arrived from California on September 11. She will handle the 2008 vintage for Hillside, however, and will help the winery find a replacement.
Posted by JohnSchreiner at Goodgrog at 2:32 PM