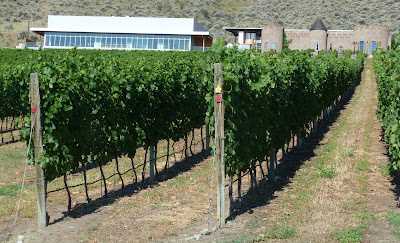 Road 13 Vineyards has been acquired by Anthony von Mandl, adding to a stable of premium wineries that includes his Mission Hill Family Estates. 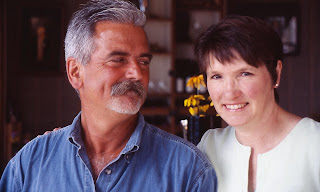 This was disclosed on Friday by Darryl Brooker, the general manager of Mission Hill. Mick and Pam Luckhurst (right), the founders of Road 13, have decided to retire from winery operations.

In all instances except Black Hills, the transactions involved long-time owners ready to exit the wine industry.

The Road 13 acquisition includes 50 acres of vineyards in the Golden Mile sub-appellation as well as a major processing facility in the southern Okanagan. Until now, all of the Mission Hill group’s processing has been done in the north Okanagan, with the exception of that done at the small CheckMate Winery. The latter winery is a neighbour to Road 13.

The Road 13 acquisition does not include the 100-acre Blind Creek Vineyard in the Similkameen Valley. It will continue to be run by Mick Luckhurst and two partners. Brooker expects to continue getting grapes from Blind Creek.

According to Brooker, it will be “business as usual” at Road 13. Joe Luckhurst, Pam and Mick’s son, is expected to continue as the winery’s manager and Jeff Del Nin continues as the winemaker.

Road 13 opened in 1998 as Golden Mile Cellars and was purchased by the Luckhursts in 2003 in what was a fairly dramatic change of lifestyle.

Mick, who was born in in 1950, was a lumber broker, a real estate developer and a building supply owner. Manchester-born Pam, a former flight attendant, has long been Mick’s business partner. They were on a summer-long sabbatical to the Okanagan from Edmonton, where they had sold a business, when the wine industry appealed to them.

The original Golden Mile winery building was designed to resemble a 17th Century Bavarian castle and was making only 1,000 cases of wine annually. Under Mick’s aggressive management, it was expanded dramatically.

The Luckhursts changed the name of the winery to Road 13 in 2008, much to the relief of neighbouring wineries in what has since become the Golden Mile sub-appellation.

Road 13 has benefitted from a series of talented winemakers in the cellar, including the late Lawrence Herder. He was succeeded by Michael Bartier. When Michael left in 2010, he turned the cellar over to Jean-Martin Bouchard, a Sherbrook native. J-M, as he calls himself, studied hotel management but, when restaurant jobs fostered a love of wine, he went to in 1998 to study wine science at . Two years ago, he was succeeded by Jeff Del Nin, formerly the winemaker at Church & State and Burrowing Owl Winery, who is also Australian-trained.

It was J-M who espoused the Blind Creek Vineyard. He considered it to be one of the best vineyards in Canada and incorporated the fruit in many of Road 13’s premium reds.

Road 13’s Castle Vineyard on the Golden Mile includes some of the oldest Chenin Blanc vines in the Okanagan. The winery produces both an Old Vines Chenin Blanc and a sparkling Chenin Blanc. This is one variety not grown in any of the vineyards owned by Sebastian Farms, von Mandl’s vineyard company.

Brooker notes there is no significant overlap between the Road 13 portfolio and the portfolios of von Mandl’s other wineries. In addition to Mission Hill, von Mandl also owns CedarCreek, CheckMate and Martin’s Lane Winery. As well, he controls a portfolio of other labels, among them Prospect Winery.


Posted by JohnSchreiner at Goodgrog at 3:59 PM