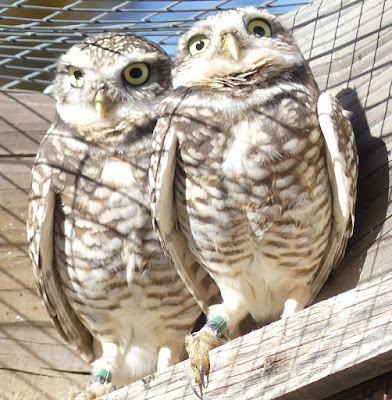 Photo: Pair of burrowing owls in the Oliver breeding facility

One of the great success stories of the Okanagan, Burrowing Owl Estate Winery celebrates its 25th anniversary this fall.

The vineyard was established in 1993 by Jim and Midge Wyse. The first vintage was made in 1997 and the winery itself was opened in 1998. It has grown to be a 40,000-case producer of premium wines, with grapes from 220 acres, almost all from the south Okanagan.

The Tuscan-style building today is perched on vast underground barrel cellars. So many solar panels have been installed on top of the buildings since 2006 that Burrowing Owl is practically energy self sufficient. And the parking lot by the wine shop has eight electric vehicle charging stations that customers are free to use.

It all started with a newspaper advertisement that Jim chanced to read in 1993 when he was still active as a property developer.

“I had been spelling off our real estate sales people as we approached the end of our sales of a 40-unit stratified town-house project in Vernon,” he remembers. “I was browsing a local newspaper and noticed the advertisement for the sale of a winery named “Chateau Ste. Claire” near Peachland. So I called the owner, Goldie Smetliner,  and met with her once, or possibly twice.”

Even without a wine industry background, he recognized that her winery was run down and that the vineyard was poorly located.

But Goldie gave him a useful bit of advice: talk to Harry McWatters, the founder of Sumac Ridge Estate Winery and even then, one of the best-connected individuals in the Okanagan. Harry introduced him to a realtor with a portfolio of vineyard properties. These included several on Black Sage Road that were fallow after the original plantings of hybrid grapes had been pulled out in 1988.

Jim was soon convinced this was a prime site for growing big red wines. He first bought 100 acres and then, joined by investors, acquired adjoining land until he controlled 288 acres. This was later subdivided, with half becoming Sandhill Vineyards. Subsequently, Jim and his son, Chris, who now runs the winery, added significant vineyard property near Osoyoos and planted a small vineyard in the Similkameen.

Burrowing Owl has built its reputation on making big red wines. “Our original big leap of faith was to get into the Bordeaux reds,” Jim says. That started with Merlot and Cabernet Franc, fleshed out since with Cabernet Sauvignon, Malbec, Petit Verdot and Syrah.

While the winery is seen as a red house, white varietals are also produced – notably Pinot Gris, Chardonnay, Sauvignon Blanc and most recently Viognier, due to be released next year.

Burrowing Owl made its first vintage in 1997 while building the winery in which wine has been produced since 1998. The winemaker for the first seven vintages was Bill Dyer, a legendary consultant from the Napa Valley. The style of his wines – rich and ripe - set up Burrowing Owl for immediate success with consumers. While he is long gone, his impact remains on the portfolio. 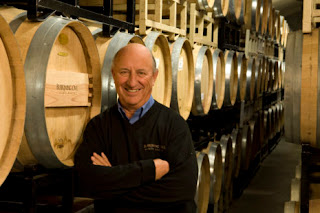 The inspiration for the winery’s name came from a roadside sign about a struggling Burrowing Owl breeding program in the Okanagan. The ground-dwelling bird, remarkably cute and cuddly, had become extinct in the Okanagan about 1980. A program at the Vancouver Zoo had spawned the Burrowing Owl Conservation Society and Jim Wyse (above) became a major supporter.

Since 2004, the winery has directed more than $1 million – money from tasting fees at the winery – to support the Society. There are now three breeding centres in B.C., including one near Oliver, and these now release about 50 breeding pairs of owls annually back into what was formerly their natural habitat.

On its website, the winery adds: “Visitors to Burrowing Owl Estate Winery are sometimes surprised – and often delighted — to see a live burrowing owl perched on a portable roost in our Wine Shop alongside a Wildlife Biologist who manages the South Okanagan chapter of BOCS.  These birds are not pets or mascots; their presence in our shop is intended to raise awareness of, and appreciation for, our feathered friends.
The birds that are chosen to be “ambassadors” for their species are usually the LOTH (Last One To Hatch), or the runts of litters, and they would not have survived in the wild.  They spend a limited amount of time in the shop (3 – 4 appearances per year), and are always closely monitored for signs of stress by highly trained members of the Burrowing Owl Conservation Society.  Burrowing Owls are naturally social birds, and the ambassadors seem to enjoy the stimulation of meeting members of the public.  We’ve seen for ourselves the positive impact that seeing these birds up-close can have on visitors, who frequently express enthusiasm about the preservation of the species and the conservation of its habitat upon meeting the birds.”
Here are notes on some of Burrowing Owl’s current wines. Some will be sold out at the winery but still available in select wine shops and restaurants.
.

Burrowing Owl Pinot Gris 2017 ($22). This wine, now sold out, alas, begins with aromas of citrus and apple. On the palate, there are flavours of pear and citrus, with a backbone of minerality. The finish is crisp. 91.

Burrowing Owl Chardonnay 2016 ($30). This wine begins with appealing aromas of citrus, apple and tropical fruit. On the palate, there are flavours of peach, pear and melon. The finish lingers. The oak is very subtle and well-handled. 92.

Burrowing Owl Pinot Noir 2016 ($38). This is made in Burrowing Owl’s signature full-bodied and juicy style, with aromas and flavours of cherry and strawberry. The winery concedes that Black Sage Bench is not ideal Pinot Noir terroir – but the wine has a strong and steady following. 90.

Burrowing Owl Merlot 2016 ($30). This plush wine begins with aromas of blueberry and cassis, leading to flavours of black cherry and black currant, with savoury notes on the long finish. 91.

Burrowing Owl Cabernet Franc 2016 ($35). This wine has aromas of blackberry, black cherry and raspberry which are echoed in the savoury and bramble flavours. The texture is generous. The bright, refreshing flavours are typical of the 2016 vintage. 92

Burrowing Owl Cabernet Sauvignon 2015 ($38). This elegant wine begins with aromas of cassis and black cherry. On the palate, the fruit is luscious, with flavours of black cherry and blackberry. The fruit flavours, mingled with spice, persist on the finish. 93.

Burrowing Owl Athene 2015 ($N/A). This is a wine made from equal parts of Cabernet Sauvignon and Syrah from a single block in the Burrowing Owl vineyard. The grapes are co-fermented. The wine is dark in colour and rich on the palate, with aromas and flavours of plum and black cherry. 92.

Burrowing Owl Meritage 2014 ($50). The blend is 32% Merlot, 23% Cabernet Franc, 23% Cabernet Sauvignon, 11% Malbec and 11% Petit Verdot. This concentrated wine begins with aromas of black currants, black cherry and spice. On the palate, there are flavours of  dark fruit mingled with cherry, vanilla, tobacco and chocolate. The tannins are ripe but firm. The wine will continue develop in bottle for at least the next 10 years. 94.

Burrowing Owl Coruja NV ($N/A). This is a superb fortified wine which the winery began making in 2007. It is made in the solera style, with half of each vintage held back to blend with succeeding vineyards. Consequently, the wine now has the complexity of good Port, with aromas and flavours of fig, plum, blackberry jam and vanilla. 93.


Posted by JohnSchreiner at Goodgrog at 9:11 PM