Pentâge wines: always worth the drive 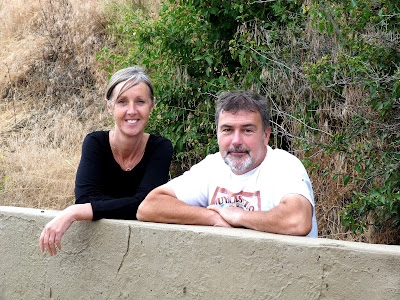 The Pentâge winery, just south of Penticton, sometimes flies just below the radar because it seems to be hidden on a hillside overlooking Skaha Lake.

It is worth figuring out how to find it, if only to see the massive barrel cellar that Paul  Gardner and Julie Rennie carved from the rock.

Paul also makes interesting wines. The 19 varieties he grows on two mountainside vineyards give him lots of blending opportunities. He crafts wines that invariably are full of flavour. For those who cannot find the winery, Pentâge last year launched a wine club, so that the wines will find the consumers.

Here is an excerpt on the winery from John Schreiner’s Okanagan Wine Tour Guide.

Pentâge Winery opened its tasting room only in 2011, eight years after opening the winery. The reason: it took Paul Gardner eleven years to plan and dig the massive 500 square-metre (5,500 square foot) cave from the crown of hard rock commanding this vineyard’s million-dollar view of Skaha Lake. Cool and spacious, this cave accommodates barrels and tanks of wine in a feat of engineering unlike anything else in the Okanagan, except perhaps the Mission Hill cellar. You can even appreciate the ambiance without a tour by peering through the gigantic glass doors at the front of the cave.

This was a derelict orchard when Paul and Julie Rennie, his wife, were so enchanted with the property in 1996 that they decided to change careers and planted grapes three years later. Julie, the Scots-born daughter of a marine engineer, was executive assistant to a well-known Vancouver financier.  Paul, born in Singapore in 1961, spent 20 years as a marine engineer before tiring of going to sea. “I got caught up in winemaking in the early ‘90s,” he remembers.

Now, he spends most of his time in the winery’s two Skaha Bench vineyards, which total 6.5 hectares (16 acres), growing so many varieties – including even Zinfandel - that one vineyard is called the Dirty Dozen. “I would still rather make small lots of interesting wine than big tanks full of wine,” he says. An example of an eccentric but delicious wine is the 2011 Cabernet Franc Appassimento Style where he mimicked Amarone by drying the grapes 58 days before crushing them.

Here are notes on recent releases.

Pentâge Fizz Blanc 2016 ($19.90). This delightful lightly sparkling wine (sealed with a screw cap) blends Pinot Gris, Chardonnay, Viognier, Gewürztraminer and Muscat. It is crisp and refreshing with flavours of apple, pear and peach. 90.

Pentâge Chardonnay 2013 ($21.90). This barrel-fermented Chardonnay has a Chablis-like freshness, surprising and delightful in a wine that is five years old. The wine has citrus aromas and flavours of apple and citrus. Bright acidity has given this wine the remarkable longevity of a good white Burgundy. 91.

Pentâge Hiatus 2013 ($22.90). This is a blend of 37% Cabernet Sauvignon, 32% Cabernet Franc, 17% Merlot, 10% Malbec, 2% Petit Verdot and 2% Tempranillo. This complex blend is eminently drinkable. It begins with aromas of cassis, cherry and vanilla. On the palate, there are flavours of cherry and plum with a peppery spice on the finish. 90.

Pentâge Syrah 2013 ($25.90). Imagine drinking a Christmas fruitcake that finishes dry. This wine begins with aromas of plum, black pepper and vanilla, followed by flavours of rich, dark fruit punctuated with black pepper on the finish. 91.

Pentâge Cabernet Franc Appassimento Style 2013 ($34.90 for 500 ml). This wine achieves it intensity of flavour because the grapes are partially dried in the air before being fermented. It is the technique for making Italy’s renowned Amarone wines. The cassis aromas jump from the glass. On the palate, a bomb of sweet fruit - blackberry, black cherry, black currant - explodes in the mouth. The richly concentrated palate leads to a lingering porty but dry finish. 93

Posted by JohnSchreiner at Goodgrog at 11:57 AM