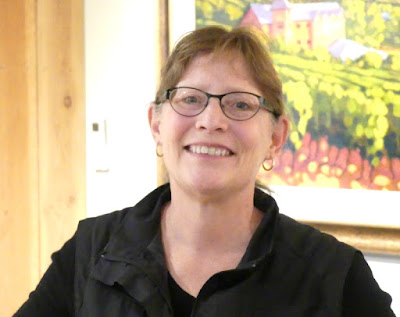 A few years ago, Kathy Malone, the winemaker at Hillside Cellars, decided to graft Muscat Ottonel onto the trunks of the winery’s one row of Cabernet Sauvignon.

The row had always underperformed, likely because it was on the same irrigation system as the adjoining rows of Muscat. The Cabernet Sauvignon was simply being over-watered.

“We have split the irrigation controls so we can control that row separately,” Kathy said recently. “This is the third year. Next year I will personally do the vineyard management on it and we will see what we can get from those vines. Maybe it would produce a barrel.”

Today, Hillside is owned by a partnership led by Duncan McCowan. But this Naramata Road property has a long and colourful history.

It was an orchard in 1979 when it was purchased by two Czech immigrants, Vera and Bohumir Klokocka. Five years later, they began replacing the fruit trees with grape vines, including Muscat.

The row of Cabernet Sauvignon was planted in the mid-1980s. If there is an older block, it might be in the Hester Creek vineyard, which was developed originally in 1968 by Joe Busnardo. An inveterate experiment with vines, he claimed to have planted as many as 128 different varieties. He could hardly have missed Cabernet Sauvignon.

Hillside, however, was the first Okanagan winery to bottle a Cabernet Sauvignon varietal wine. That wine was one of the reasons that Sal D’Angelo established D’Angelo Estate Winery in 2007, not far from Hillside.

At the time, Sal also operated a winery near Windsor in Ontario. In 1985, he had begun vacationing in the Okanagan because the climate was beneficial to his health. One summer, having met Vera, he brought along a bottle of his Ontario red wine while asserting that the Okanagan was not growing good reds.

She disputed that by opening a bottle of Hillside Cabernet Sauvignon. It changed Sal’s and he bought vineyard property on the Naramata Bench in 2004. He has since sold the Ontario winery.

In addition to that legacy row of Cabernet Sauvignon, Hillside now also buys the variety from a nearby grower (and winery partner) who has a good site for the late-ripening variety. That vineyard was planted 10 years ago. “I never thought we could ripen Cabernet Sauvignon on the Bench,” Kathy says, “but I love it.”

Two of the varieties planted by Vera and Bohumir still are among Hillside’s flagship wines. The Muscat Ottonel, made in a dry aromatic style, is snapped up quickly on release. In recent years, Hillside has planted more of this variety.

There is also a Vera and Bohumir story about that variety. The owner of a small vineyard from which they sourced cuttings for their plants identified variety as Pinot Blanc. The Klokockas, who had formerly worked for the Czech national airline, did not know much viticulture, but enough to know the grapes tasted nothing like Pinot Blanc. They settled on the name, Klevner, because it tasted like an aromatic German white with a variety of names. Several early releases of Hillside Muscat were labelled as Klevner until, in 1992, a visiting grape expert from France identified the grape correctly.

After Bohumir died in 1995, Vera sold the winery. She currently lives in Nova Scotia where, with cuttings from Hillside, she is planting some Muscat Ottonel.

Gamay is another variety planted initially by Vera and Bohumir. There is a legacy block near the winery. Hillside also buys Gamay and Pinot Noir from another grower on the Naramata Bench.

A decade or so ago, Hillside was buying grapes from other regions in the Okanagan. Since Kathy Malone moved to Hillside in 2008 from Mission Hill Family Estate, Hillside has converted to using Naramata Bench grapes exclusively.

Hillside Viognier Reserve 2016 ($22 for 341 cases). Twenty-nine percent of this was barrel-fermented and aged five months in barrel. The remainder was fermented in stainless steel. The portions were then blended. The wine begins with aromas of citrus and green apple which are echoed on the palate. There is also a good spine of minerals. 90.

Hillside Pinot Gris Reserve 2016 ($22 for 329 cases). Fifty-one percent was fermented in Tokaj and Eastern European barrels (17% new). This was combined after six months with the portion that was fermented in stainless steel. The wine begins with aromas of spice and pear, leading to tropical fruit, pear and vanilla on a rich palate. 91.

Hillside Muscat Ottonel 2016 ($22 for 830 cases). This wine won a double gold and was best of class at this year’s Cascadia Wine Competition. It begins with aromas of rose petals and spice. The flavours are surprisingly intense, with notes of grapefruit mingled with spice. The finish, which is quite persistent, is dry. 92.

Hillside Gewürztraminer 2016 ($19 for 1,475 cases). The winery draws Gewürztraminer fruit from six Naramata Bench vineyards, including its own. Juicy in texture, the wine begins with a note of spice on the nose, leading to flavours of lychee, peach and grapefruit. 90


Hillside Pinot Noir 2014 ($22 for 495 cases). This wine, aged eight months in French oak (20% new), has aromas and flavours of cherry and raspberry. An earthy forest floor spice on the finish adds complexity. 90.

Hillside Gamay Noir 2014 ($22 for 378 cases). This wine was aged eight months in French (27% new) and Hungarian barrels. It has aromas of raspberry and cherry with a hint of spice and white pepper. The fruit is echoed on the silky palate and on the lingering finish. 92.

Hillside Merlot Cabernet Franc 2013 ($24 for 399 cases). This wine, which is 51% Merlot and 49% Cabernet Franc, begins with brambly aromas (blackberry, cranberry) and delivers flavours of plum and black currant. The wine has been aged in barrel for 13 months. 90.

Hillside Cabernet Franc 2015 ($26 for 174 cases). This wine is available exclusively to members of Hillside’s wine club. The wine begins with aromas of raspberry and cherry leading to flavours of blackberry and cherry. 91.

Hillside Cabernet Sauvignon Howe Vineyard 2014 ($34 for 186 cases). This is also a wine club exclusive. Aromas of cassis and sweet red fruit jump from the glass. On the palate, there are flavours of cassis, cherry and dark chocolate. The firm structure signals this is a wine for aging. 92.

Hillside Soirée en Blanc NV ($40 for 500 ml). Only 33 cases were made of this fortified Muscat Ottonel; it is only available in the wine shop. An interesting wine, it tastes like a Muscat grappa. 90.

Hillside Soirée NV  ($40 for 500 ml). This is a fortified (Port style) wine anchored around Syrah and Merlot. The winery has developed a solera style for this wine, meaning it is a blend of multiple vintages. It is as tasty as a good fruit cake. 92.

Posted by JohnSchreiner at Goodgrog at 8:53 AM

There was cabernet sauvignon planted as part of the Becker Project in the 1970s which predates the Hillside planting. I'm aware of some in Summerland (that still exists) that was planted then, but there were other small pockets of cab sauv planted throughout the Okanagan at that time.

Even though it's not the oldest planting, it's still a good wine.