House of Rose is a good-time winery 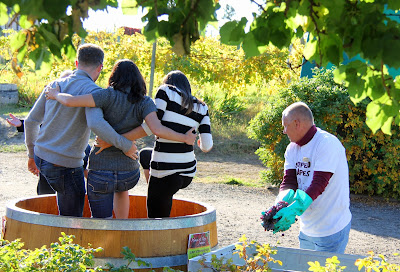 The grape stomps on the Saturday afternoons during the Okanagan Fall Wine Festival are becoming something of a tradition at House of Rose Winery near Kelowna.

Such a rollicking public romp fits the informal atmosphere that has prevailed at this winery since it was opened in 1993 by the ebullient Vern Rose. While the winery at 2270 Garner Road is perceived to be somewhat off the beaten path, it scores high as a wine-touring destination because shows guests a good time.

The grape stomp is just one example. “It's free (we encourage a food bank donation) and fun for the whole family,” says co-proprietor Aura Rose. “People love to get it off their bucket list. We've watched babies to those over eighty jump into our specially made Grape Stomping Barrel - sort of a take on the famous I Love Lucy clip. ”

There are also music concerts during the summer. There are customer appreciation days. This summer, the winery applied for a license to host weddings in the vineyard. And there is a BnB suite at the winery, one of the additional features created by Vern’s daughter Aura, and her husband, Wouter van der Hall (left). They took over the winery in 2009, two years after a stroke incapacitated Vern.

Since I have not blogged about this winery before, here is some background on its history from the 2012 edition of John Schreiner’s Okanagan Wine Tour Guide.

After running this winery for 10 years, Vern Rose began thinking of selling in the 2003 vintage, when he turned 76, because that was one of his toughest summers. The Okanagan Mountain Park forest fire threatened his Rutland neighbourhood three times, forcing evacuation of the winery and sharply curtailing the usual number of visitors. Yet even after such a taxing summer, Vern hoped that a buyer would let him manage the vineyard for five more years. Before a buyer emerged, Vern was incapacitated by a stroke that sapped the energy from one of the wine world’s great characters.

A Saskatchewan native who was born in 1927, Rose acquired his Okanagan vineyard after retiring in 1982 from a career as a schoolteacher in Edmonton. A few years later he accomplished his lifelong dream to visit New Zealand. Not one to merely enjoy the sights, he attended a viticultural conference and volunteered at a vineyard. That inspired him to open his winery north of Kelowna. His habit of wearing Tilley hats (a clean one at wine shows, a scruffy one in the vineyard) became his trademark.

He was perhaps the only Okanagan vintner to still back the heritage varieties that most others removed in the 1988 pullout. House of Rose still produces both Okanagan Riesling and De Chaunac in its 2.2-hectare (5½-acre) vineyard, along with Verdelet for icewine and Maréchal Foch, almost the only red hybrid to make a comeback in British Columbia. The vineyard also has Chardonnay and Cabernet Foch. The latter was provided to Vern by Swiss plant breeder Valentin Blattner after the two had become fishing buddies.

Aura, who runs her own health care communications company, became involved with House of Rose in 1996 as the bookkeeper. She and Wouter, a Dutch-born child welfare consultant, have brought discipline to the sprawling wine portfolio at House of Rose, with perhaps more focus on the heritage varietals and on Winter Wine, as the trademarked dessert wines are called.

While there have been changes in the vineyard since that was written, House of Rose still grows De Chaunac (the only Okanagan winery with the variety) and, among other wines, turns it into port.

Both the winery’s labels and the off-dry style of some of the wines differentiate House of Rose from many of its peers. The winery’s signature red is called Hot Flash. It is off-dry and, with softer tannins, made to be quaffable. “We did a focus group with 85 women to create this wine - easy drinking and no food necessary,” Aura says.

Another label is called Sweet Mystery. “We've been making a sweet red for a few years now, [and] they are becoming more popular,” Aura says. “The secret ingredient in this wine is our port.”

Here are notes on current releases from House of Rose. Prices do not include tax.

House of Rose Cool Splash 2016 ($15.57). This is a Pinot Gris with a name suggestive of a summertime frolic. It begins with aromas of apples and stone fruits, leading to flavours of apple and melon. A touch of residual sugar balances the racy acidity. 88.

House of Rose Grapes With Benefits 2016 ($15.57). The winery does not disclose the blend of this wine; however, a dash of 2014 Viognier Icewine is included to add a touch of honeyed sweetness to the pineapple and citrus aromas and flavours. This is a good aperitif. 89.

House of Rose Rosé eh 2016 ($16.43). This robust rosé wine is a blend of Gewürztraminer, Maréchal Foch and Syrah. It begins with a brilliant strawberry pink hue. It has aromas of cherries and strawberries and flavours of watermelon. The finish is spicy and dry. 88.

House of Rose Merlot 2014 ($19.91). This wine begins with aromas of cherry, plum and blackberry, leading earthy flavours of cherry and cranberry, punctuated with a touch of oak. 90.

House of Rose Hot Flash 2016 ($17.30). This dark wine is an unoaked blend of Maréchal Foch and Syrah, with the dark cherry and gamey deli aromas of the Foch carrying the day. The gamey and cherry notes are echoed on the palate, along with some of the classical vegetative Foch flavours. This retro wine brings back pleasant memories of the 1980s, when many wineries still grew Foch. 88.

House of Rose Sweet Mystery 2016 ($17.30). This unconventional red is a blend of Maréchal Foch, Pinot Noir and Syrah. The wine begins with jammy aromas of plum and blueberry, echoed in the flavours. The wine is off-dry but the residual sweetness lifts the aromas and adds flesh to the texture. A good quaffing red. 88.

House of Rose Vintage Okanagan Tawny 2012 ($26 for 375 ml). This is made with the De Chaunac grape, a French hybrid once ubiquitous in Canadian vineyards but now almost gone. The wine has excellent rancio character of a tawny port, although lighter in body that a Portuguese tawny. There is an aroma of plum and fig. On the palate, there are flavours of chocolate, cherry and fig. The alcohol is 16.9% but it is not clear from the winery notes whether this was fortified or whether that was achieved by two years of slowly fermenting until the yeast quit. In any event, the finish is smooth. 88.
Posted by JohnSchreiner at Goodgrog at 9:13 PM