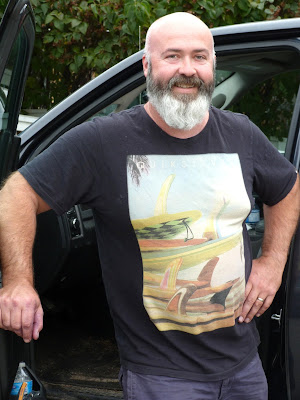 The ceremony where he is awarded his MW culminates five years of study, tastings and research. He joins an elect group numbering just 340 world wide.

“It’s a big day,” recounts James Cluer MW. “You go to Vintners Hall in . In a room packed with hundreds of major wine personalities, you go up on stage and they give you your MW certificate. Jancis [Robinson] is in the crowd clapping. It’s surreal. Good thing there’s a healthy dose of afterwards.”

Cluer is a wine educator who operates Fine Vintage Ltd. He has just recruited Marcus to join his staff of teachers.

With his wife, Rachel, Marcus operates Daydreamer Wines, a small winery they established in 2013. They also are principals of Grassroots Wine Consultants. He has been the international wine buyer for the Hemisphere Wine Guild since 2008.

His induction into the of Wine should go a long way to raise the profile of Daydreamer Wines. He currently is releasing his 2014 vintage wines, all of them well made.

These include two Syrah/Shiraz wines. That is where Marcus’s story begins.

He was born in in 1974. His family once owned a share of Mount Langi Ghiran, the legendary producer in the state of , and his uncle, Trevor Mast, was a winemaker. “One of my favourite wines in the world was made at my family winery,” Marcus says. “It is just unique to that site … an atypical . That wine was what inspired me to want to get involved with the industry.”

He graduated in enology in 1997 from . He worked as a “flying winemaker” to gain experience, first with Simonsig in and then in and the Rhône. He resumed his career in briefly before coming to , where he was recruited in 1999 to run wineries in and . In Niagara, before he returned to in 2002 as a consulting winemaker, he met Rachel, an accountant with a talent in design and photography.

They moved to in 2004 where Marcus became the winemaker first for and, a year later, for Therapy Vineyards.

Daydreamer is the culmination of a family winery dream that Rachel and Marcus share. The winery’s Merlot-based blend is named Amelia, for their daughter. Daydreamer launched with about 1,000 cases including Chardonnay and the two Syrahs, one co-fermented with Viognier. “I like cool climate Syrah,” Marcus says. (One of the Syrah wines is released as a , the Australian name for the varietal.)

His Syrah style is influenced by the Langi Ghiran style.

“They were never very big wines but I was struck with their elegance,” Marcus recalls. “Super spicy. It is a very peppery block of . There was this inherent balance that I did not often see in the warmer climate . I guess the warmer climate did not appeal to me as much. That is one of the reasons I was attracted to . I do like northern styles. I do like cooler climate expressions of that variety. I think the Okanagan has a real potential to do it.”

Daydreamer wines currently are made in space that Marcus and Rachel lease on the Naramata Bench. “We’d like to have a facility from which we can do 2,500 to 3,000 cases,” Marcus says. “We are only doing about 1,300 cases this year. We need to find a site where we can do at least 2,500 cases. I don’t have any ambitions to do more than that. I don’t want to make more than I can do myself.”

He plans to become organically certified when the new winery is built.
“Because we have such a dry climate with low disease pressure, it just makes sense for me to do it that way if we can,” he says. “My family vineyards were organic and biodynamic. I do some biodynamic practices now. Anything that makes the vineyard healthier makes the wine taste better at the end of the day.”

On requirement for the MW is to do original research and write a 10,000-word thesis on it.

“I wanted to do something that is relevant to the industry here,” says Marcus. His research looked at the effect on the flavour of Syrah wine made with lightly frozen grapes and also with hard frozen grapes. In some vintages in the Okanagan, vineyards will be nipped by frost before picking is finished. Marcus made wine with grapes frozen at -2C and at -10C.

“As a caveat, the entire research is now owned by the of Wine,” Marcus says. “It is up to them whether or not they wish to publish it. In a nutshell, the basic findings were that there were no sensory differences between the treatments.”

Daydreamer Pinot Gris 2014 ($20). This wine was fermented and spent one month in new oak. That and the 10% Viognier in the blend contribute to the generous weight on the palate. It has fruity aromas of pears and apples, leading to flavours of lime and green apples. The finish is crisp, tangy and refreshing. 90.

Daydreamer Rosé 2014 ($20). This is 50% Pinot Noir, 30% Syrah and 20% Merlot; all made with free run juice after 18 hours of skin contact. This is a robust dry rosé, with an appealing salmon pink hue and aromas and flavours of cherries. The wine has enough weight to be paired with meals over winter. 90.

Daydreamer Jasper 2014 ($25). This is 78% Merlot, 22% Cabernet Franc. It is a big ripe and juicy wine, with aromas and flavours of cherry, blackberry and vanilla. There is a touch of spice on the fruity finish. 90.

Daydreamer Tay 2014 ($N/A). This is a Pinot Noir. The colour is dark and the spicy cherry aromas are deep and spill from the glass. The wine has flavours of cherry, blackberry and ripe strawberry. The texture is firm but it has begun to evolve toward a velvet polish. 90.

Daydreamer Amelia 2014 ($25). This is 90% Syrah co-fermented with 10% Viognier. The wine begins with aromas of plum, spice and white pepper. On the palate, Syrah’s typically gamey flavours include plum and black cherry. With long ripe tannins, the wine is immediately accessible. 91.

Marcus Ansems Chardonnay 2014 ($30). This is an appealing fruit-forward Chardonnay. It was barrel-fermented and had modest barrel aging, but not enough to add noticeable oak flavours. It has aromas of apples and pineapples with a hint of vanilla (that’s the barrel doing its work). The wine is fresh and lively with lemon and apples flavours and with bright acidity. 91.

Marcus Ansems Shiraz 2014 ($35). Only 115 cases of this wine were produced; one needs to be fast to get some. (Most of this winery’s sales are done via the Daydreamer website.) This wine is dark with muscular aromas of plum, black cherry, vanilla and pepper. The texture is concentrated, supporting bold flavours of black cherry, delicatessen meats, Christmas spices, coffee and black pepper. 92.

Posted by JohnSchreiner at Goodgrog at 3:13 PM