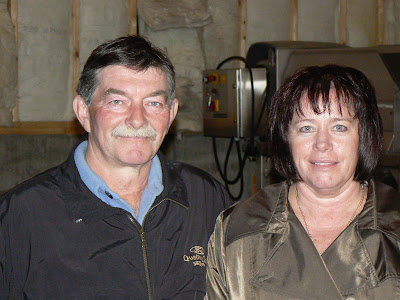 The four owners of 3 Mile Estate Winery, scheduled to open June 15, 2011, researched winery names for a year. They even considered Pigeon Hill Winery before decided to keep it simple. After all, 3 Mile Road branches off Naramata Road just north of their winery.

But Pigeon Hill? It is the name of one of the vineyards here. Jake Gunther, one of the partners, is also a pigeon farmer. The several long, narrow buildings on the property – one not far from the winery – house about 3,000 pairs of birds, producing squab for sale to restaurants and consumers in Vancouver. Before moving to the Okanagan several years ago, Jake was one of the largest pigeon farmers in Abbotsford in the Fraser Valley. And that was just a sideline for Jake, a Winnipeg native who grew up in the Fraser Valley and who also was in commercial door manufacturing for about 30 years.

Colleen, his wife and now the winery’s cellar manager, also comes from a career outside wine. A native of Crowsnest Pass, Alberta, she operated a successful spa in Abbotsford with as many as 37 employees. Before that, she worked in Penticton’s Lakeside Hotel when it opened; and that familiarity with the Okanagan drew the Gunthers back there again in 2004.

Initially, they bought acreage on Naramata Road just with the intention of building a house. Sadly, two deaths in Colleen’s family caused them to set that plan aside temporarily. Then they were able to buy an adjoining property with a house – and a producing vineyard. A chance encounter with the owner led to the purchase of a third contiguous property. In total, they now own 14 acres, nine of it planted to vines, including Gewürztraminer, Pinot Gris, Viognier, Merlot, Cabernet Franc, Cabernet Sauvignon, Syrah, Pinot Noir and Gamay.

“We would never have bought an operating winery,” Colleen says. “We had to learn to walk before doing a winery. We have been busy just learning viticulture and we have gotten quite good at that.” Jake has developed such an enthusiasm for pruning his vines that he hates to stop at the end of the day when it gets dark.

“He uses the pigeon manure to fertilize the vineyard,” Colleen says. “We had some areas of the vineyard that were suffering. The clay gets so hard. We had somebody come in and rip up the soil around the vines and then Jake just put a shovel of this dried manure [around the vines]. Those plants are beautiful now.”

For a few years, they sold grapes to Hillside Estate Winery, located nearby on the other side of Naramata Road. The decision to develop the winery was accelerated by a year when Hillside decided it did not need their grapes in 2010. The Gunthers enlisted Gail and Darryl Rahn as partners. She is Colleen’s sister and he is a BC Hydro manager.

“They live in Revelstoke and will be moving here eventually,” Colleen says. “My husband and I have a lot of business experience. We will get the winery up and running and get those first few years under our belt.”

While dealing with Hillside, they came to know Kelly Symonds, who was then the winemaker there. When she left to join a Vancouver winery two years ago, the Gunthers asked if she would consider making their wine, should they decide to open a winery. “I said to my partners we really need that professional help right now, until we get our feet wet” Colleen says.

Kelly agreed, helping make almost 1,200 cases of wine in 2010 and teaching Colleen how to manage the cellar and its laboratory when the winemaker is not around.

The business plan calls for limiting production to 2,500- 2,800 cases a year. “We want to produce ultra premium wines and not get very large so we can baby the wine” Colleen says.

The winery will launch a fragrant and dry Gewürztraminer, a complex barrel-fermented Pinot Gris and a Viognier dessert wine. When a red wine is available, it will be a blend of the Bordeaux varietals and Syrah. The plan is to call it Trilogy Plus. The Pinot Noir and Gamay vines were not yet fully in production last fall.

“The beauty of this business is the fact that it is our product and we have control,” Colleen says about the winery. “We grow the grapes. We can cut back the tonnage and baby those vines. It is all about what we do. It’s a business, too, and we have to market [the wines]. But the basics of it are just producing a really good product. If you put your heart and soul into it, I just can’t see where you will go wrong.”