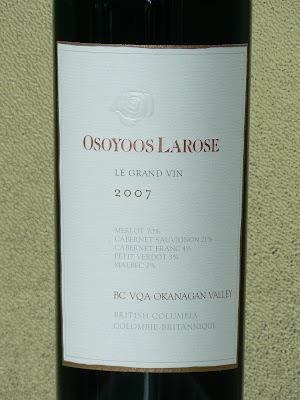 It there is a British Columbia red that should be in every serious collector’s cellar, it surely is Le Grand Vin from Osoyoos Larose.

The latest release, the 2007, is now in wine stores at $45 a bottle, along with its little brother, Le Pétales d’Osoyoos at $25 a bottle.

Both wines are made in the style of fine Bordeaux reds with, one might argue, the advantage of Okanagan fruit ripeness (although some recent Bordeaux vintages have been as hot, if not hotter, than the south Okanagan.)

Osoyoos Larose is the joint venture established in 1998 by Vincor Canada with Groupe Taillan. The latter is the parent company for something like half a dozen chateaux in Bordeaux, including the distinguished Château Gruaud-Larose.

The Okanagan venture gets its name partly from that chateau and partly from the fact that its vineyard is just northwest of Osoyoos, on a hillside looking over the valley. Vincor did the joint venture to benefit from a transfer of knowledge and technology. The Canadian company let its French partner pick the vineyard site and choose the varieties planted. The French also recruited a veteran Bordeaux winemaker, Pascal Madevon.

The wines are made and cellared in a segregated production area in the back of Vincor’s big Jackson-Triggs winery at Oliver. An area is set aside in the vineyard for a winery but I somehow doubt that has a very high priority with Constellation Brands, the giant American company that took over Vincor several years ago. After all, Pascal has quite an adequate facility already. The one thing that Osoyoos Larose lacks is a tasting room of its own, a bit of a marketing drawback.

Pascal arrived from France just in time to do the inaugural 2001 vintage. He likes the terroir and the project so much that he has since become a Canadian citizen. He will tell you, forcefully, that he is making Okanagan wine, not French wine.

As true as that is, the style is reminiscent of Bordeaux. Le Grand Vin, like top wines from Bordeaux’s classified growth wineries, is really not ready to drink on release. You can drink but the structure of the wine really calls for more cellar aging. And while you are waiting for Le Grand Vin to soften, you should be drinking Le Pétales. That wine is somewhat softer, with less aging in new oak (although it also has the backbone to age well for several years).

Unlike a Bordeaux chateau, Osoyoos Larose announces the blend of Le Grand Vin on the front label. That would be heresy in tradition-bound Bordeaux but New World drinkers want to know what they are drinking.

Le Grand Vin 2007 is 70% Merlot, 21% Cabernet Sauvignon, 4% Cabernet Franc, 3% Petit Verdot and 2% Malbec. This is a dark, concentrated wine with aromas of red fruit and cedar and with a complex palate of black currants, plums, coffee, chocolate, liquorice and cedar. On first opening, the tannins were firm and even a bit bitter on the finish, which is quite normal for a young red made in the Bordeaux style. Half a bottle was reserved for re-tasting on the second day, by which time the wine had rounded out to a rich palate with Christmas pudding flavours. If you must open the wine now, please decant it an hour or two ahead of time. If you can, put it away until at least 2015. My rating on this wine, 90-94, reflects where I think it will grow to be with cellaring.

Le Pétales 2007 is a little more accessible straight out of the bottle but it also benefits from decanting. The wine has ripe red berry aromas and flavours, with a touch of vanilla and chocolate. It seems a little lighter than Le Grand Vin but it is still a first-class Meritage blend with the structure to take it through to 2015 as well if you put a few bottles in the cellar. 90
Posted by JohnSchreiner at Goodgrog at 4:52 PM

Any stores in Vancouver in which you have seen Le Grand Vin? Everywhere I go still has the 2006. Even the LDB only has 2006 in their system (and only 119 bottles left province-wide). I'd love to get a bottle for a friend's birthday in a couple weeks and any tips would be very helpful!

Check the VQA stores. Sounds like the LDB ishlding the 2007 back until all the 2006 is gone.

The 2007 vintage has not yet been released to the VQA stores. Our order sheets still indicate the 2006 vintage. Possibly it will be released in November as that is traditionally when the Osoyoos Larose is released. The have held onto the 2007 for an extra year as we started receiving the 2006 in November 2008.

Same situation in Ontario lots of 2006 but no 2007. It usually releases in late October but as of now the LCBO has no idea if or when it will be available. All inquiries are referred to Vincor who doesn't bother responding to emails. It appears that they have too much 2006 left and will not commit to 2007 until stocks are gone.

The wait is nearly over. The 2007 vintage has begun to appear in VQA and other wine stores in British Columbia. One wishes that Vincor had the courage to have both vintages on the market at the same time. After all, these wines need to age some more in the consumer's cellar. People who collect Le Grand Vin can deal with that.

These wines age well, providing they are stored in a cool cellar. I had a magnum of the 2001 a year ago and it was at its peak. I figure you can count on Le Grand Vin to develop into its 10th year and then plateau for a few years, just like a good Bordeaux,