It's September and Twisted Tree is almost sold out 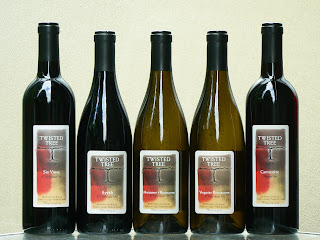 Since opening in 2006, Twisted Tree Vineyards at Osoyoos has developed a following among consumers who appreciate wines that are not always mainstream varietals.

This summer’s releases, for example, have included the first two vintages of Tannat made in the Okanagan. The winery also releases Tempranillo, Carmenère and blends of the Rhone whites, Marsanne and Roussanne.

As well, Chris and Beata Tolley, owners of the winery, also buy grapes to make such mainstream varieties as Syrah and Gamay. Invariably, the wines are made in small volumes and some of the wine is available only at the wine shop. For example, the 2007 Tannat is only sold there and, when I checked last week, the winery only had 14 cases.

It is never dull to visit the winery or to pick the wines, some of which are available in the VQA stores from time to time. Currently, the 2008 Tannat is still available.

The wine business is a second career for the Tolleys, who former Calgarians where Beata was a chartered accountant and Chris was a software engineer. Before they bought vineyard property, they both spent a year at Lincoln University in Christchurch, New Zealand’s top wine school.

On returning in 2004, they bought a cherry orchard at the eastern entrance to Osoyoos. The cherry trees were old and twisted, hence the name of the winery. Ironically, the layout of the vineyard, which was planted in 2005, called for the removal of all the cherry trees.

Since varieties such as Merlot and Syrah can be purchased from other growers, the Tolleys decided to devote their five-acre planting entirely to interesting varieties grown by hardly anyone else. The strategy has proved an excellent way of differentiating Twisted Tree from its 200 peers.

Many of the wines reviewed below are now sold out at the winery but may still be available in wine stores and restaurants.

The winery also has a second label, Second Crossing. Currently in the market is Second Crossing 2008 Long Creek Red ($18), a delicious brambly red with soft ripe tannins, an easy drinking red. There are no technical specifications but that may be, like the 2007 version, a blend of Tannat and several Bordeaux varietals. 88.

Twisted Tree 2009 Marsanne Roussanne ($21.90). The winery made 387 cases of this wine. This is a dry white with aromas of melons and citrus fruits and flavours of citrus and herbs (think sage). There are notes of herbs, flint and even a hint of anise on the crisp finish. 88-90.

Twisted Tree 2009 Viognier Roussanne ($21.90 but sold out). This is 52% Viognier, 47% Roussanne, 1% Marsanne. It begins with aromas of lees which give way to aromas that are both floral and fruity (pineapple). On the palate, there are flavours of pineapple, citrus and apricot. The Viognier gives the wine good weight, along with generous alcohol. 88-90.

Twisted Tree 2008 Carmenère (Sold out). The winery grows only an acre of this old Bordeaux variety and uses most of it in its Bordeaux blend (see below). Only 96 cases were released as a varietal. It has intense aromas and flavours of pepper and even tingled on the palate. This makes the wine a bit one-dimensional on its own but sensational in spicing up blends. 86.


Twisted Tree 2008 Gamay Noir (Sold out – only 167 cases were made). The wine appeals immediately aromas of cherries, cinnamon and chocolate. On the palate, the wine is generous with flavours of spiced cherry and plum. The soft ripe tannins add to the mouth appeal. A damned delicious wine. 90.

Twisted Tree 2008 Pinot Noir. Only 124 cases were made from fruit grown on a moderately cool site west of Osoyoos; and the wine is sold out. This is a dark Pinot Noir with dramatic aromas of spice, mocha and ripe cherry and flavours of cherry and plum. The weight is a bit muscular but silky texture is there. The fruit tasted sweeter on the second day, suggesting this wine will benefit from a few years in your cellar.

Twisted Tree 2008 Syrah ($24.90 but sold out). The winery released 492 cases. This is a full but elegant red. In an original twist, the wine is aged in Hungarian oak, a choice the Tolleys made after several years of barrel trials. This oak enhances the aromas of blackberry and contributes tannin to the structure. There is a hint of pepper and flavours of black cherry, liquorice and chocolate. 89. 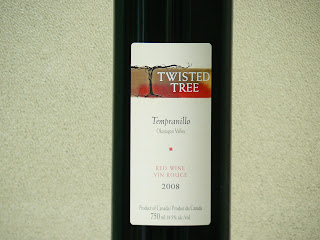 Twisted Tree 2008 Tempranillo (sold out). The winery produced 240 cases of this wine, its second vintage of the fine Spanish red variety grown only by a handful of Okanagan wineries. The wine begins with aromas of cherry and shows bright fruit flavours, again cherries and red currants with a hint of mocha and smoky notes of oak on the finish. The wine benefits from being decanted. 88.

Twisted Tree Six Vines 2008 ($Sold Out). The winery made 916 cases of this wine, a large volume by Twisted Tree standards. It is a blend of all six Bordeaux varieties, including Carmenère. There is no other Meritage blend quite like this. It is a big ripe red with flavours of blackberry, black cherry and plum framed by toasty oak. The personality is rustic in the very best sense. This is also a damned delicious wine. 90. 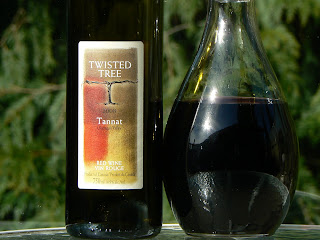 Twisted Tree 2007 Tannat Select Vintage (N.A) This is the winery’s first vintage, but second release, of Tannat, a red varietal grown primarily in the south of France and in Uruguay. Earlier this year, the winery released its 2008 Tannat (see the following review). In style, the wines are quite different. This wine reminded me of Vega Sicilia because of the volatile acidity. A little bit can be a good thing. Here, it the aromas (red berries, spice, iodine) and also propels the flavours of ripe plum, black cherry, spice and vanilla. This is a bold full-bodied wine with 14.9% alcohol. 90.


Twisted Tree 2008 Tannat ($27.90) is a dark wine with a bold 14.9% alcohol but with so much fruit that one never notices the alcohol. (Obviously, this variety ripens reliably in the South Okanagan.) It has an aroma that is smoky, meaty and redolent with red berries. As my companion put it, it is a nose like a good cigar. On the palate, there are flavours of currants, cherries, mocha, leather and spice. The flavours are vibrant and the finish is lingering. The tannins are firm enough (but not hard) that the wine benefits from resting in a decanter for a time; it was still tasting very good the next day. 91.
Posted by JohnSchreiner at Goodgrog at 2:20 PM