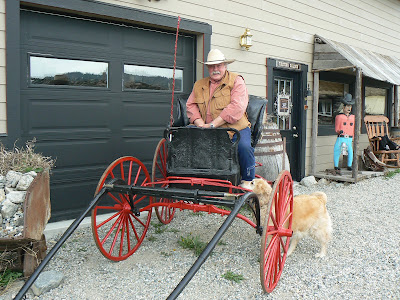 Bruce Fuller, the owner of Rustic Farm & Cellars winery south of Oliver, was having lunch at the winery’s picnic area when the mudslide thundered down Testalinden Creek on the afternoon of Sunday, June 13.

It swept by Rustico Farm but it destroyed or damaged homes, vineyards and orchards on about 20 nearby properties.

This Sunday, June 27, Rustico’s picnic area will be open for what is being called “an old-fashioned country-style potluck.” The purpose: a fund raiser to help victims of the mudslide. So far, those individuals have been promised some provincial aid but there is no insurance available other than through litigation.

If ever a winery’s front yard fits the image of a country potluck, this is it. The winery house is a log cabin with a sod roof. There is a farmer’s grain wagon at the winery’s driveway (Bruce found it on Craig’s List and traded a few cases of wine for it). The buggy just outside the tasting was made in 1902 in Ontario for use by doctors. The tasting room is decorated in the style of a country antique store.

The wines are named in keeping with this theme: Doc’s Buggy, Farmer’s Daughter, Isabelle’s Poke, Mother Lode and Last Chance. A couple are associated with One-Armed Reid, supposedly the prospector who staked the first claim at the Fairview site near Oliver.

Sunday’s fund raiser has sombre reasons but, like an Irish wake, this promises to be an entertaining afternoon for those who come out for it.

Bruce is a former marketer (he once worked in Jimmy Pattison’s organization) who set out early this decade to establish a winery. After a couple of false starts and a falling out with a partner, he was able to acquire control of this property in 2007.

There is a lot of history in this Golden Mile property. It was Crown land when purchased in 1963 by a dapper Hungarian immigrant named John Tokios. He worked many years at silver mine at Beaverdell in eastern British Columbia. As that mine was winding down, he took apart a log bunkhouse and re-assembled it here. For exterior ornamentation, he hung up sub-bleached skulls and antlers scavenged from the nearby hills. Bruce, who now lives in the house, removed much of the ornamentation. Aside from that, the place looks a lot like it did in the Tokios era.

John Tokios began planting vines here in 1968. Some of the varietal choices have changed over the years – Okanagan Riesling, for example, is gone. The vineyard now grows Merlot, Zinfandel, Pinot Noir and Gewürztraminer but still has one of the Okanagan’s last plantings of Chancellor, a serviceable red French hybrid.

John Tokios died in 2000 and the property was sold four years later to a couple who started developing a winery. By the time they changed their minds, a functional metal-clad winery had been built. When Bruce took over, there was not much left to do but add the rustic touches to what he likes to call “Canada’s most romantic winery.”

His ideas of romance include a working ice box to make ice for chilling the wines and for producing chunks of ice for children, a treat on a hot day. Wines are served in tumblers although Bruce has stemware hidden away for those who insist on it. This spring one guest grumbled at using tumblers until he was squelched by another who said he had just spent two weeks in Italy and all the wineries he visited there used tumblers.

The irony is that Bruce’s original concept was to replicate an Italian village in the Okanagan. The rustic character of the Tokios farm took over and led him in a different direction. This is a winery with lots of personality, including an owner who can be larger than life.

Here is what you get to taste from the tumblers:

Mother Lode Merlot 2007: Every wine has a story which Bruce recounts with great theatricality. The reference here is to a mother lode of gold that a prospector named One-Armed Reid was looking for. He would have been happy with this tasty red, a medium-bodied wine with a core of sweet fruit. 88.

Last Chance N.V.:One-Armed Reid, according to Bruce’s narrative, staked the first claim at Fairview. This wine is a blend of Chancellor, Merlot and Zinfandel. The percentages are not disclosed but I would guess from the cherry flavours and the slightly bland personality that there is a lot of Chancellor here. One-Armed Reid would like more Zinfandel next time but this will slake a miner’s thirst in the meanwhile. 85.

Doc’s Buggy 2007 Pinot Noir: The label on the winery website shows 2008, so a vintage change seems to be underway. This wine was a medium-bodied quaffer with strawberry flavours and a good silky texture. 87

Farmer’s Daughter 2008 Dry Gewürztraminer: The myth here has to do with a daughter of Alsace parentage. The wine is indeed made in the Alsace style, almost austerely dry but with rich spicy flavours and aromas. 87.
Posted by JohnSchreiner at Goodgrog at 4:46 PM