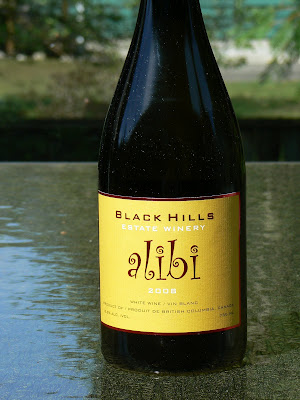 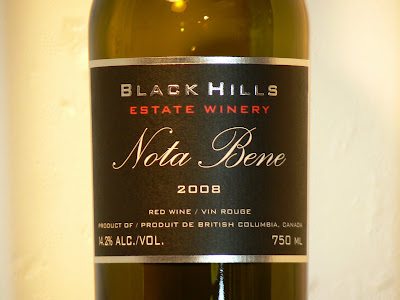 At a recent private dinner party, my host served two vintages of Black Hills Nota Bene, 2007 and 2005, and mentioned that he had recently taken delivery of a case of the 2008.

As it happened, I had just tasted the 2008 Nota Bene, along with the three other wines that Black Hills released recently.

We got into the conversation about how long Nota Bene ages, triggered by my view that the 2008 is drinking so well now that one should not tuck it into the cellar and forget about it.

Then I noticed that Black Hills has just sold some boxes containing a 10-year vertical of Nota Bene, beginning with 1999. The winery believes that this iconic Okanagan red will cellar at least that long, depending on how well it is stored. I have tasted other Nota Bene verticals. While I think the wine peaks at about seven years, how long it stays on that plateau is still to be determined.

My host has a fine air-conditioned cellar. His case of the 2008 might easily make it to 2018, except that it tastes so good now that it may not be around that long.

Black Hills was launched by two couples who were changing from Vancouver business careers. In its first few years the winery made only one wine, the red blend called Nota Bene, which is Latin for “take notice”. Consumers did indeed take notice. Within months after releasing the first wine, Black Hills had such a cult following that the tasting room rarely was open. Most of the wine was snapped by those able to get onto the mailing list.

In 2007, the winery was purchased by a group of 265 investors, among them a Hollywood actor named Jason Priestley. The cult following has continued, even as the wine prices have risen somewhat. A few years ago, a Nota Bene release was sold out in 37 minutes. The 2008 Nota Bene, which I will review a little later in this blog, is technically sold out as well. However, a diligent search will unearth a few in private wine stores.

As well, the new owners of the winery do open the tasting room from time to time. It is possible to buy the wines from time to time, and also to get onto the winery’s email list (the wine club) so that you get a shot at buying a case when it is released.

The wines are not inexpensive but if you cannot find a friend or two to share a case of wine this good, you need to make new friends.

Nota Bene’s claim to age worthiness relies on the fact that the wine is usually built on a foundation of Cabernet Sauvignon. Nota Bene 2008 ($60) is 48% Cabernet Sauvignon, 41% Merlot and 11% Cabernet Franc. It begins with an appealing aroma of red fruit with vanilla and mocha. It is rich and ripe on the palate – one of the ripest tasting Nota Bene wines that I can recall – with flavours of plums, black cherries and vanilla. On the finish, there are hints of chocolate, more red berries and spice. The soft, ripe tannins make the wine accessible and delicious. We decanted it at home which, no doubt, allowed it to open even more. 91-92.

The immediate lushness of this wine leads me to caution collectors not to put it away and forget it, just in case this wine peaks early. Perhaps it won’t. My host’s 2005 Nota Bene is very good now and still seems to be developing in the bottle.

The other three recent releases from Black Hills are also wines that you will want to talk about as you enjoy them.

Black Hills Carmenère 2008 ($50), a very small production red, is one of the very few wines grown in Canada from the Carmenère grape, an old Bordeaux variety now grown mostly in Chile. Not much of the variety grows in the Okanagan, largely because it is a late ripening grape – perhaps too late for much of the Okanagan. The Black Hills wine is not one you will forget once you taste it. There is a remarkable amount of pepper in the aroma and on the palate, along with cherry and currant flavours. It is entirely possible that the pepper might have disappeared if the grapes had been marginally riper (the alcohol is 13% compared with the Nota Bene’s 14.2%). I like peppery wines but I have tasted with people who don’t care for this character. Still, more people rather than fewer will enjoy this wine, particularly with a big steak. 88.

The following two wines are available from the winery, by the case.

Black Hills Chardonnay 2008 ($30). There is no debate here: this is simply a delicious and elegant Chardonnay, tasting of tropical fruits and citrus and with a touch of butterscotch. The finish lingers. 90.

Black Hills Alibi 2009 ($30). This wine is primarily Sauvignon Blanc with roughly 20% Sémillon. Here is another fine white, appealing as soon as you get your nose in the glass and smell the twist of grapefruit rind and the spice. On the palate, the zesty flavours show herbal notes with hints of grapefruit. Rich on the palate, the wine is elegantly balanced to finish crisply. 90.
Posted by JohnSchreiner at Goodgrog at 9:09 PM