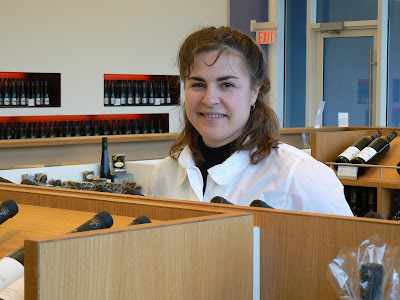 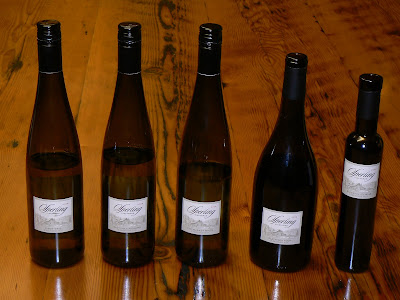 With the release this fall of the first wines from Kelowna’s Sperling Vineyards, winemaker Ann Sperling (photo above) has re-connected with the Okanagan, where she first began making wine 25 years ago.

But this is more than a story of the hometown favourite coming home after stellar success elsewhere. It is the story of fulfilling the dreams of Ann’s forebears, the Casoro family, pioneering Okanagan grape growers and vintners. As you will see from the tasting notes, Ann (her mother, Velma, is a Casorso) has done her family proud.

The Casorso family came to the valley when Italian immigrant Giovanni Casorso arrived in 1883 to work for the Oblate Mission’s farm. Soon he had his own homestead near the mission, succeeding brilliantly as a farmer (he was Onion King one year). When tobacco was grown in the Okanagan, he was one of the largest tobacco growers. Perhaps it is a coincidence but the barn on the label of Sperling Vineyards wines looks a bit like a tobacco-curing barn.

The family first got into the wine business when Rosa, Giovanni’s wife, and Pete, one of their sons, invested in the consortium that in 1931 launched what became Calona Wines. When the Capozzi family gradually bought control of the winery in the 1950s, Pete refused for years to sell his shares. “His pastime for many years was to go to their board meetings and raise hell,” Ann says.

A family history credits Charles Casorso with planting the first Kelowna vineyard near Rutland about 1925. His brothers Pete and Louis ordered vines in 1929 and planted grapes on Pioneer Ranch, as the family property was known. It appears, however, the major crops grown here were apples until Pete retired in 1960, turning the farm over to his daughter Velma and her husband, Bert Sperling, who are Ann’s parents.

Bert converted the entire property to grapes. Initially he grew the same hybrid and labrusca varieties that everyone else had before switching to Riesling, along with four hectares of Sovereign Coronation table grapes. Over the years he sold wine grapes to Calona, then to Growers in Victoria, and, in recent years, to Mission Hill.

Ann has vivid memories of growing up on the Pioneer Ranch. “When I was very young, the area that is now under vine had grapes, peaches, cherries, apricots and prune-plums growing on it,” she remembers. “All the grapes at that time were labrusca or labrusca hybrids. The exception was the Perle de Csaba. It is a vinifera and a Muscat type. It ripened early, in late August, and tasted wonderful. I certainly attribute my love of Muscat and Moscato d'Asti to having gorged myself as often as possible on those grapes.” In the 2009 vintage she used those grapes for a light sparkling wine to be released with the coquettish name, “Sper … itz.”

With food sciences degree at the University of British Columbia, Ann began her winemaking career at André’s Wines in 1984. She moved to CedarCreek Estate Winery in 1991 and was soon making award-winning wines. She moved to Ontario in 1995, began a career as a consulting winemaker. She made inaugural vintages for highly-regarded Malivoire Wine Company and currently is director of winery operations for Southbrook Vineyards, a rising Niagara star.

The decision to reconnect with the Okanagan flowed from a family conference about the future of the vineyard. “It has always been in the back of my mind that I wanted to make wine here because I am so familiar with every foot and every slope and every grape on the property,” Ann says. In 2008, Sperling Vineyards got its toe in the business by making about 500 cases. In this vintage, production has risen to 1,800 cases.

This year, the family intend to get a winery license and open a tasting room in Pioneer Country Market, a market and delicatessen that Ann’s mother has operated since 1985 on Benvoulin Road in Kelowna, not far from the Father Pandosy Mission.

Meanwhile, Sperling Vineyards has been making its wine at nearby Camelot Vineyards. Ann also makes the wine for Camelot and for Clos du Soleil winery in the Similkameen Valley. Both are still relatively small producers and, as Ann points out, there is little overlap in the portfolios of all three of her British Columbia clients.

Sperling Vineyards has debuted with five wines. Here are some notes.

Sperling Vineyards Pinot Gris 2008 ($19). This is deliberately not a mainstream Okanagan Pinot Gris fruit bomb but rather is a crisp, lean white designed to pair with westcoast seafood dishes. It begins with citrus aromas, shows flavours of lemon, lime and minerals and ends with tangy acidity and a dry finish. 88

Sperling Vineyards Old Vines Riesling 2008 ($29). Here is a Riesling to rival that of nearby Tantalus Vineyards. Both vineyards, fine Riesling sites, were planted in 1978 with the highly regarded Clone 21B Riesling (developed by Hermann Weiss in the Mosel and now grown all over the world). This is a wine with a pristine laser-like clarity of fruit and acidity. It begins with aromas of herbs and citrus, shows abundant flavours of lime and has a refreshingly tangy finish. 90

Sperling Vineyards The Market White 2008 ($16). Here is the fruit bomb for those who like a glass of wine or two before dinner and something a little off-dry with food. It is a blend of Pinot Gris (60%), Gewürztraminer (32%) and Riesling (8%). This aromatic white is an easy to drink charmer, with layers of flavour (grapefruit, lime) and with the fleshy texture that comes with residual sweetness. 88

Sperling Vineyards Old Vines Foch 2008 ($26). This is the winery’s big red. Ann made a similar wine at Malivoire where it has become a cult favourite in Ontario. I predict the same for this wine in B.C. Think of Australian Shiraz. Bold and fleshy, with smoky aromas of plums and black cherries, the wine offers gamy flavours of prunes lifted by the sweet spice of American oak. The spice on the finish is delightful. 89-90

Sperling Vineyards Riesling Icewine 2008 ($36 for a 200 ml bottle). Ann made only about 400 tiny bottles of icewine last vintage and none this year, and that is by design. At Sperling Vineyards, icewine will always be the niche product “that it is meant to be,” she says. This is another wine with a laser focus: bright, tangy, with intense tropical flavours of lime and grapefruit. The wine is beautifully balanced – not too sweet because the natural sugar in the wine is not over the top and is balanced with what the Germans would call “racy” acidity. 90

I can just hear Rosa smacking her lips as she tells her great-granddaughter: “Bella, bella.”
Posted by JohnSchreiner at Goodgrog at 3:33 PM