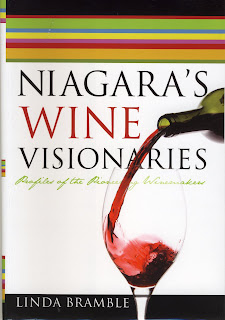 The new book from Linda Bramble, a prolific and authoritative Ontario wine writer, is a must for anyone interested in Canadian wine, with its lively profiles of leading figures that have shaped the business.

The book is Niagara’s Wine Visionaries: Profile of the Pioneering Winemakers, published at $29.95 by James Lorimer & Co., Toronto. It is a slim 224-page volume but it is packed with information, including an opening chapter that moves briskly through early history and through viticultural essentials about Ontario.

Each of the subsequent nine chapters is built around one individual. The pen portraits of those individuals are fleshed out with their accomplishments. At the same time, each individual’s story brings with it larger stories about significant industry developments. It is a lively way of personalizing the history of Ontario wine.

The first profile is of distiller Harry Hatch who brought the T.G. Bright & Co. winery from the founding family in 1933. Ontario had emerged from prohibition six years earlier. It was an odd prohibition because the production and sale of wine was still allowed as long as the wines were sold either in large containers or as prescriptions through doctors and pharmacies. Guess what happened?

The number of wineries quadrupled in a decade. There were about 50 in 1927. Not many were competent and all struggled during the Depression. Hatch saw this as a buying opportunity. After buying Brights, he folded a number of other wineries into Brights. Then he hired professional winemakers and ordered French grape vines to replace the native American varieties, which made poor wines. He died in 1946 but the team of professionals assembled in Brights went on to do ground-breaking research and development. The first varietal Chardonnay in Canada, for example, was made by Brights in 1955.

That leads nicely into a profile of Donald Ziraldo who, with Austrian-born winemaker Karl Kaiser, founded Inniskillin in 1974. Inniskillin was the first new winery (except for a honey winery that failed soon after opening) to get an Ontario license since 1927. There were seven big wineries in Ontario in 1970 and the bureaucrats maintained that was enough.

Ziraldo and Kaiser got lucky. The new chairman of the Liquor Control Board of Ontario was Major General George Kitching, an elegant man who drank decent wine. Soon after he took over, he said, in response to a reporter’s question, that he enjoyed a good French Burgundy with his roast beef. When an Ontario grape grower chastised him for favouring imported wine, Kitching snapped: “Good God, you don’t think you make good Burgundy!” Or words to that effect.

He was persuaded that Ziraldo and Kaiser could make good wine. He gave them a license and made sure that the LCBO supported this new winery. The subsequent success of Inniskillin laid the foundation for estate wineries in both Ontario and British Columbia. And Inniskillin, by winning a major international award for icewine in 1991, put Canada on the world’s map for wine.

One of the fine estate wineries that emerged in the 1980s was Len Pennachetti’s Cave Spring Cellars. Although he and his winemaking partner, Angelo Pavan, both have degrees in philosophy, they were leaders in establishing good viticulture on the Jordan Bench (although you would not suspect it from the hilarious photo here of the absurdly crooked rows in one of Pennachetti’s early vineyards).

Perhaps his legacy (he remains in the business) is the legislation that set out standards for Ontario wine and influenced the development of standards elsewhere in Canada.

The Paul Bosc chapter profiles a leader of grape growing on the Niagara Peninsula. Born in Algeria, trained in France, he did absolutely ground-breaking research and development. He also launched Chateau des Charmes, a fine Ontario winery. Both Bosc and Ziraldo hold the Order of Canada.

There is a charming story of the prolonged French litigation which began in 1964 against Chateau-Gai, Bosc’s first Canadian employer, to stop the winery from selling "Canadian Champagne". Bosc risked his job by refusing to testify that it was anywhere near as good as the real thing. Canada finally agreed in 2003 to stop using European geographical indicators. Bramble neglects to note this was done so that Canadian icewine could be sold readily in Europe.

The profile of Paul Speck and his brothers, who operate Henry of Pelham Winery, serves as the vehicle for describing the impact of the free trade agreement on Canadian wineries. The winery had been started by Paul’s father but the sons (one not old enough at the time to drink) were pitched into running it during a turbulent period when the elder Speck succumbed to cancer.

Bramble has an inelegant turn of phrase to describe the reaction of Ontario grape growers to free trade: they felt “gobsmacked.” But it is close to the mark. The California wine industry wanted Canada to dismantle the protections for Canadian wine. The Canadian negotiators agreed because few thought the wine industry worth protecting anyway. But when the industry got over being spit in the face, it pried the conditions from government (money for replanting vineyards or modernizing wineries, access to imported vines) that have turned Canadian wine around so brilliantly.

The profiles of Don Triggs, the founder of Vincor, and Andrew Peller, the founder of André’s Wines Ltd., are vehicles to describe corporate risk takers and also to detail modern-day consolidation.

Peller started his winery in B.C. in 1961 because Ontario would not give him a license. He got into Ontario in 1970 by buying an existing winery. By that time, he was badly over-extended and he got his son, Joseph to give up a successful medical practise and run the business. Joseph did a good job but what really made André’s successful was Baby Duck. Launched in 1971, it once was Canada’s best-selling wine. The company today is run by Andrew’s grandson, John, who has invested heavily in buying additional estate wineries and vineyards in both B.C. and Ontario.

Just after the free trade agreement took effect, Triggs led the management group which bought John Labatt’s wineries with a ridiculously small down payment, taking on huge debts. Not only did Triggs pull that off with skill: he built it into Vincor, the eighth largest wine group in the world until it was swallowed up several years ago by Constellation Brands.

In my view, the Triggs chapter could be longer. By focussing on Niagara, Bramble reduced the scope of this account. Triggs was a world player, not just an Ontario player. Vincor acquired or developed five superb wineries in British Columbia and has vastly more vineyard here than in Ontario. His strategy of acquiring wineries in the U.S. (two), Australia and New Zealand gave the Canadian-controlled company global presence – even if buying a South African brand made Vincor vulnerable to being taken over.

Bramble notes that Ziraldo has started a new winery. It should be observed that Triggs has planted a vineyard in the Okanagan and, with daughter Sarah just back from wine school, likely will also open a new winery in a few years.

The profile of Norm Beal, founder of Peninsula Ridge, is of a recent entry into the Ontario wine industry, one who brought refreshing corporate savvy from a previous career. Both he and Linda Franklin, who runs the Wine Council of Ontario and is also profiled, are consummate and effective movers in government circles. These two profiles underline the astonishing amount of government lobbying that the wine industry needs to do to get ahead.

The fact is this isn’t Europe where wine is a central part of culture and national pride (see France) or, along with bread and water, a daily necessity (see Italy). In Canada, the industry is over-regulated, over-taxed and, in some quarters, still not respected.

Bramble’s book lays out well most of the industry’s war stories over a century or so. This industry and these people have triumphed against long odds.
Posted by JohnSchreiner at Goodgrog at 2:02 PM