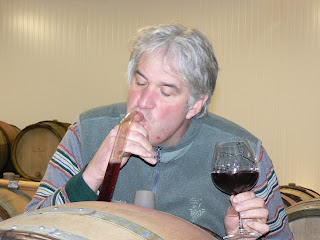 Photo: Thomas Bachelder sucks Pinot Noir from the barrel with his wine thief
At Ontario’s Le Clos Jordanne winery, the site for the Frank Gehry-designed winery has now been planted to grape vines.

Scratch a great - but probably unaffordable – building that, if erected, would have ensured a place for Ontario wines on the world map all by itself.

Launched in 2000, Le Clos Jordanne is a joint venture between Vincor Canada and Groupe Boisset of Burgundy. While developing four vineyards on the Jordan Bench, the partners commissioned Gehry to design the winery. The Canadian-born architect is known internationally for dramatic buildings, such as the stunning Guggenheim Museum in Bilbao.

He produced drawings for what would have been the most remarkable winery building in Canada, a shimmering silvery structure with a billowing roof inspired by clouds over a vineyard. It would have been a tourist magnet to Ontario wine country, just as the Guggenheim has transformed tourism in Bilbao.

A year or so after the designed was completed. Vincor was taken over by Constellation Brands, the world’s biggest wine producer. There has been no announcement that Constellation’s practical accountants appear to have axed the Gehry winery. Since vines now grow on the site formerly set aside for it, that conclusion seems logical.

That’s the bad news. The good news is that the rest of the project is moving ahead. Canadian-born wine maker Thomas Bachelder is making exceptional Pinot Noirs and Chardonnays. The winery has now released its 2006 wines (9,000 cases were made that year). It has 10,000 cases of 2007 and 11,000 cases of 2008 in barrels or tanks. When all of its 52 hectares of vineyard are in full production, the winery expects to make about 16,000 cases a year (cases of six).

Thomas continues to work in the so-called temporary winery that that the joint venture rented, a homely green building beside the busy Queen Elizabeth Highway. The building formerly served a flower company and the cold rooms in which the flowers were stored have become admirable barrel cellars. The facility may not be pretty but it is adequate for wine-making.

It is about four kilometres from the Le Clos vineyards. Because there are no vineyards at the building itself, Le Clos is not able to operate a retail store or a tasting room at the winery. The wines are all sold directly to restaurants and to internet buyers.

These are wines that define some of the future directions for Niagara wine.

“The idea was to show people that if you concentrated on a couple of varietals, you could make terroir wines,” Thomas says. “Terroir is all we talk about.”

Thomas trained and worked in Burgundy and in Oregon before being recruited to manage Le Clos Jordanne and to make the wines. There are signs of Burgundy all over his crowded office, from a vineyard map to an empty Burgundy bottle on his desk. His entire winemaking career – and he has been at it for nearly a quarter of a century – has been dedicated to Pinot Noir and Chardonnay. He is driving Le Clos with a Burgundy template.

Le Clos has four vineyards, all are on benches just below the Niagara Escarpment, near the village of Jordan. Most of the vines were planted in 2000 and 2002. As the vines mature, Thomas is taking pains to identify the qualities of each vineyard and to identify the superior blocks of vines. Le Clos’s best wines – its single vineyard wines – come from such blocks.

The wines that are not quite so singular go into Le Clos’s Village Reserve range. These are still excellent wines but they do not show the individuality of the single vineyard wines. Thomas believes that “wine should taste like it comes from somewhere.” A very Burgundian notion.

Le Clos current release is from the 2006 vintage. (It’s first vintage was 2004, not counting 300 cases of Pinot Noir made in 2003.) Before we got to a tasting of some of the current wines, Thomas and I tasted the vintages still in barrel or tank.

The 2007 vintage in Ontario was dry and hot. All the Le Clos Pinot Noirs are remarkably dark with flavours that have a meaty boldness at this stage. These are probably not typical Ontario Pinot Noirs but they will be tremendously satisfying to drink. Even in a big ripe year like 2007, the Le Clos single vineyard wines show noticeable individual personalities – more minerals from Claystone Terrace, more delicate finesse from La Petite Vineyard, for example. That’s how terroir should work.

The vineyard differences are more obvious in the 2008 barrel samples. Wines from a cooler year, these Pinot Noirs are lighter but possess considerable feminine charm and delicacy. It was obviously a good Pinot Noir year, at least on the Jordan Bench.

These are my notes of some of the current releases:

Le Clos Jordanne 2006 Chardonnay - Le Clos Jordanne Vineyard ($40):
An expressive wine with ripe tangerine flavours and a rich buttery texture built around mineral notes and subtle oak. While the wine spent 17 months in barrel, less that 20% of the barrels were new. As a result, the fruit flavours are vibrant and fresh. There is a touch of spice on the finish. 90

Le Clos Jordanne 2006 Chardonnay – Claystone Terrace Vineyard ($40): This vineyard is only 300 metres east of the vineyard that produced the previous Chardonnay but there difference is notable. The soils her give the wine more minerality; the finish leans almost to flintiness. However, the wine is bigger, with flavours of peaches, melon and butter. 90

Le Clos Jordanne 2006 Pinot Noir – Le Clos Jordanne Vineyard ($40): An elegant wine with notes of cherry and rose petal on the nose and also on the palate. There are also red fruit flavours with spice on the finish. There is a fine mineral backbone with the velvet texture of classic Pinot Noir begin to develop. A wine to cellar for several years. 90

Le Clos Jordanne 2006 Pinot Noir Village Reserve ($30). This is the winery’s workhorse red, with a production of 6,758 six-bottle cases, or the bulk of the vintage. It represents a blend of wine from all of the winery’s vineyards. It is a solid Pinot Noir, with notes of strawberry and cherry on the nose and the palate. It has begun to show the classic silky texture but still has enough tannin to benefit from another three years in the cellar. 88
Posted by JohnSchreiner at Goodgrog at 3:03 PM