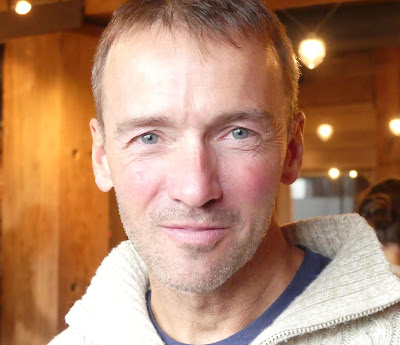 If the British Columbia wine industry handed out packaging awards, a sure winner would be Amulet Wines, a new label just released by winemaker Dwight Sick through Roche Wines of Penticton.

Each bottle is emblazoned with a simulated gold medallion surrounded by a crown of thorns and perched on the word, Amulet, in red. Since the glass is dark, both the medallion and the name of the brand stand out dramatically. This is a bottle that dominates the table. 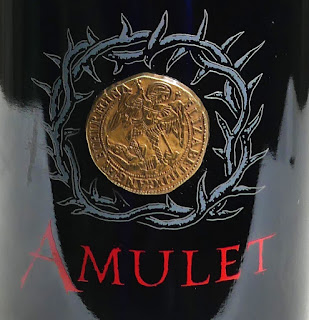 The wines – a red and a white – are every bit as impactful as the package. These also are limited production wines made at the Roche winery and are being sold through the Roche website.

Dwight Sick, now the winemaker at Moraine Vineyards, began collaborating with Dylan and Pénélope Roche several years ago when Dwight still was the winemaker for Stag’s Hollow Winery.

“I am very excited about the release of Amulet as I have been visualizing and conceptualizing these wines for the past 15 years,” Dwight wrote in a covering letter with the samples.

Both wines are made with Rhone varieties – varieties comparatively rare in the Okanagan. This sets the wines apart from the mainstream, but in a positive way. These are not weird natural wines but wines with solid palate appeal that anyone would welcome to the table.

The weird bit comes, perhaps, in how the arresting label design is explained.

“The medallion on our Amulet bottles is a replica recast of the original hand-struck Gold Angel coin from the Elizabethan era,” the winery writes. “First appearing in 1470, the coin depicts St. Michael slaying an evil dragon. Rumoured to be Shakespeare’s preferred method of payment for his services, the gold coin was also frequently worn as an Amulet to ward off evil and bring good luck to those in its possession.”

Dwight continues: “This concept of good vs evil plays well with the style of our Rhone-inspired wines as, we believe, in order to be good, we sometimes must be a little bit evil.”

That should start a good theological debate over a glass or two of these wines. Here are notes on the wines.

Amulet White 2018 ($26.79 for 163 cases). This is a blend of 90% Viognier and 10% Marsanne. The grapes were whole clustered pressed. The juice underwent a long, cool ferment in French oak (14% new, 28% second fill and 58% neutral) and was then aged six months before being bottled unfined and unfiltered. The wine begins with aromas of stone fruit, honey and spice, leading to flavours of nectarine and apricot mingled with hints of oak. The texture is rich and the finish is dry. I would recommend decanting this wine to let it open fully in the glass. 91.

Amulet Red 2018 ($35.71 for 123 cases). This is 46% Grenache (from a Penticton vineyard), 28% Syrah and 26% Mourvedre (from vineyards on West Bench Osoyoos). Whole berries were left to cold-soak for five days. Then half of the most lignified Grenache stems were added and fermentation began with indigenous yeast. After 20 days, the wine went into French oak barrels (20% new, 80% neutral) and left there for seven months. The wine was also bottled unfined and unfiltered. The wine begins with appealing aromas of black cherry, fig and spice. On the palate, there are robust flavours of black cherry, plum, black licorice, pepper and sage. The finish lingers. This wine also benefits with decanting. 93.

Posted by JohnSchreiner at Goodgrog at 7:37 AM