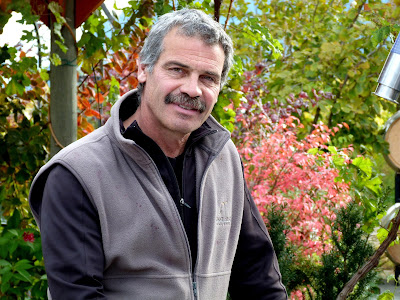 One of the most storied vineyards in Summerland is Krimo Souilah’s Canyonview Vineyard, which is planted to Chardonnay and Pinot Noir.

Over the last decade or so, the fruit has been purchased by a number of wineries, notably Okanagan Crush Pad Winery. After the 2015 vintage, OCP dropped the vineyard because it is not organic. OCP has converted its own vineyards to organic production and is moving toward biodynamic practices.

The Canyonview fruit has found a new home, still in Summerland: Giant Head Estate Winery, opened in 2015 by John Glavina and Jinny Lee.  They have just released a superb 2016 Canyonview Chardonnay, available at the winery for $75.

“I told Krimo when we were making the wine that I wanted to make the best Chardonnay possible from his vineyard, and would he help do that,” John says. “He said, ‘John, there is only one way to make top tier Chardonnay, and that is fermenting in oak.’ He taught me to do that.”

The Canyonview Vineyard is in a valley below the Summerland Research Station, with a view of the Kettle Valley rail trestle on the last remaining section of that railroad. Krimo has owned the property since 2004 and once considered starting a winery there. It would have been a logical move, considering his career in the wine industry.

Born in Algeria in 1948, he trained in France as a winemaker and worked there until he emigrated to the Napa Valley in 1978.

“I got a job the first week with Clos Du Val Winery,” Krimo told me in a 2008 interview. “Bernard Portet [who ran Clos du Val] hired me because we went to the same school. I worked there 17 years. I was hired for the Pinot Noir and Chardonnay program. Bernard is a Bordeaux person from Lafite, so they needed somebody for Pinot Noir and Chardonnay.”

Krimo spent 17 years at Clos du Val. “In 1997, I decided to stop winemaking, basically because I was not making that much money,” he said. “I consulted for a year … and I didn’t like it.” Then the French cooper, Mercier, hired him to manage its barrel sales from Napa.

A 2003 sales trip to the Okanagan introduced him to the region. “It took me a couple of visits to realize that this is going to be another Napa North, with time,” he said. He particularly liked the quality of the Pinot Noir in several Summerland vineyards and that led to his decision to buy the Canyonview property and plant Pinot Noir and a little block of Chardonnay.

“Why Chardonnay? It is basically a pure industry speculation,” he said. “It markets very well. If you plant something, plant Pinot Noir. Not that many people get involved with it. So if you know a little bit about wine and you want to go forward, Pinot Noir will be the future. Pinot Noir in this area is perfect,” he said.

He did not pursue a winery license primarily because he was living in California (and is believed to maintain a home there still). He made a little wine for himself in 2006 from the first harvest, and then began marketing the grapes while continuing to sell barrels. At least three different wineries bought Canyonview grapes before Giant Head came into the picture.

John Glavina, who was born in Montreal in 1960 and has a degree in computer science, has had a successful career in technology, both with international firms and as head of his own consulting business. He and his wife, Jinny, an electrical engineer, took a French vacation in Gevrey-Chambertin in 1998, and discovered great Pinot Noir which ignited their interest in growing their own wine.

In 2004, the same year that Krimo bought the Canyonview property, John and Jinny bought a nearby apple orchard and in 2006 began converting it to vineyard. The four acres of high density plantings grow Pinot Noir, Merlot, Chardonnay, Gewürztraminer and a little Riesling.

“Jinny likes the idea of growing grapes that she likes to drink,” John says. “And she wanted to grow Pinot Noir, probably because she read how difficult is to grow, how challenging it is to make wine with, she decided this is what she wants to do. She loves Pinot Noir.”

The winery, on Gartrell Road, takes its name from Giant’s Head, the extinct volcano that towers 500 meters over Summerland.

Here are notes of some of the wines currently available in the Giant Head wine shop.

Canyonview Chardonnay 2016 ($75 for 225 cases). This wine was fermented in new French oak barrels. Two-thirds was aged in barrel for 10 months and one-third was aged in stainless steel. John also avoided giving it full malolactic, preserving the acidity which makes the wine so refreshing. It has aromas of stone fruits and apples. On the palate, there is a bowl of tropical fruit flavours. The note of cloves and the very subtle and well-integrated oak give the wine a lingering, spicy finish. 93.

Giant Head Merlot 2015 ($28). The wine begins with aromas of cassis and black cherry, leading to flavours of black cherry, black currant and blackberry. The concentrated texture of the ripe fruit gives the wine a rich, satisfying weight and a lingering finish. 90.

Giant Head Pinot Noir 2015 ($39). This wine manages to be silky and intense at the same time. It begins with aromas and flavours of cherry and plum, with a hint of mocha on the very long finish. 91.


Posted by JohnSchreiner at Goodgrog at 9:11 AM