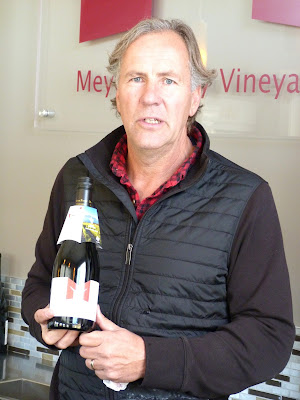 Meyer Family Vineyards exemplifies how the British Columbia wine industry has gone from insignificance to global respect in a very short time.

Meyer began making only premium Chardonnay wines, coming to market in early 2008 with just 600 cases from a 1.6 hectare Naramata vineyard. It did not take owners JAK Meyer and Janice Stevens very long to realize the winery needed to be larger. By the end of 2008, they had purchased a larger second vineyard near Okanagan Falls.

There was a block of Pinot Noir in that vineyard. By happy coincidence, Chris Carson, JAK’s Canadian-born but New Zealand-trained winemaker, has a passion for both Pinot Noir and for Chardonnay.

Growth since then has been dramatic. “We are up to almost 8,000 cases this vintage,” JAK said in an interview in October, 2016.

The winery has launched new products. Just released is Meyer’s first bottle-fermented sparking wine. The production, at 550 cases, is as large as Meyer’s entire first release in 2008.

Meyer now makes enough wine that it has begun exporting to seven foreign markets including Britain, where Meyer Pinot Noir can be found in 169 Marks & Spencer stores.

“I took it on myself to try to export,” JAK says. Marks & Spencer had been buying wine from an Ontario producer until several brutal winters savaged harvests from Niagara vineyards. Two years ago, the British retailer put out a call for wine through the British Columbia Wine Institute. Meyer was one of four Okanagan wineries willing to supply Marks & Spencer.

Meyer’s original shipment was 600 cases and there has been a repeat order. JAK believes there is a longer-term demand for about 400 cases a year. The wine is a version of the best-selling Meyer Okanagan Valley Pinot Noir, a 2,500-case brand made with fruit from contract growers as well as from its own vineyards. The wine sold in Britain has been tweaked slightly to meet Marks & Spencer’s requirements. “There is a Marks & Spencer winemaker,” JAK says. “We send barrel samples from those four vineyards. They choose the percentages for the blend.”

The export sales appeal to JAK for two reasons. First, there is money to be made in overseas markets.

Secondly, the business has raised the Meyer profile. “The amount of press I have received because of our export business is worth hundreds of thousands of dollars,” JAK believes. “I have been in the Irish Times, the London Times, Decanter Magazine; had a half a page article in the Globe & Mail. Our wines are selling and competing internationally, and are in some of the best restaurants.”

Meyer is among a small number of Okanagan wineries that have chosen to specialize just in Pinot Noir and Chardonnay. There still is a small block of Gewürztraminer on the winery’s McLean Creek Vineyard near Okanagan Falls. The variety was there, along with Merlot, when JAK bought the property. Nearly all of the Merlot and most of the Gewürztraminer has been, or soon will be, replaced with either Pinot Noir or Chardonnay.

JAK also is considering planting more Pinot Noir on a neighbouring parcel. In the meantime, he has been able to double the harvest at the Meyer vineyards with fences and cattle guards to keep deer away from the vines during 2016.

Here are notes on wines currently released or due to be released before spring.

Meyer Traditional Method Extra Brut NV ($40 for 550 cases). This is 70% Chardonnay, 30% Pinot Noir. The wine has had a total of four years aging in tank and bottle before its release. It has the slight bready note of classic Champagne. It also has brightly focussed fruit showing notes of lemon and granny smith apple. It is clean and fresh on the palate with crisp finish. The bubbles are fine and persistent. 92.

Meyer Stevens Block Chardonnay 2015 ($28). This wine is from a small block of Chardonnay on the winery’s Old Main Road Vineyard near Naramata. The wine is unoaked and made in the style of Chablis. It has aromas and flavours of tropical fruits; peach mingles with lime on the palate. The wine is exquisitely fresh. 91.

Meyer McLean Creek Vineyard Chardonnay 2015 ($33). This wine has aged in French oak barrels but, since only 18% were new, the oak influence shows just a slight hint of toast in the aroma, along with citrus. On the palate, buttery flavours mingle with hints of orange and apple. 92.

Meyer Tribute Series Chardonnay 2015 ($33). This wine, made with Naramata grapes, is the latest in the series of wines paying tribute to a worthy person or cause. The 2015 supports the Hawksworth Young Chefs Scholarship. The wine begins with a delicate gold hue and aromas of lemon. It is rich on the palate, with lemon and tropical fruits framed by well integrated oak. 92.

Meyer Micro-Cuvée Chardonnay 2015 ($65). This powerful wine is due for release next March. It was aged 11 months in French oak barrels (50% new). Brioche in the aroma and flavour mingles with lively citrus flavours. This elegant wine will age superbly. 95.

Meyer Okanagan Valley Pinot Noir 2015 ($25). This wine was aged in older oak barrels which softened the wine without adding much oak flavour. It has aromas and flavours of cherry and strawberry. The juicy texture adds to the wine’s immediate appeal. 90.

Meyer Old Block Pinot Noir 2014 ($50). This wine is made from a small Pinot Noir block in the McLean Creek vineyard that was planted in 1994. The clone is unknown but the wine is exceptional. It begins with aromas of black cherry and plum with hints of forest floor. This is echoed on the palate, where the finish is spicy and savoury. Only 205 cases were made. 93.

Meyer Micro-Cuvée Pinot Noir 2014 ($65). This wine is made by choosing the best block and best clones from the McLean Creek Vineyard and then selecting the best barrels to produce 110 cases. It will be released next March. This aged 11 months in French oak (50% new). The wine has aromas of cherry and vanilla. On the palate, the flavours of plum and cherry are subtly integrated with toasty oak. The finish has savoury notes of forest floor. 95.

Posted by JohnSchreiner at Goodgrog at 3:54 PM