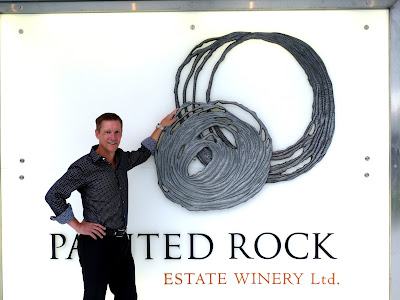 Painted Rock Estate Winery is so excited about its 2015 Chardonnay that it has already distributed some hand-bottled samples for review.

The wine is actually scheduled to be bottled on May 30. I would expect it will have a month or so of bottle age before it is released to the market, if only because wines – especially whites - suffer profound bottle shock from bottling and need time to recover.

But when you see this wine, do pick up a few bottles. It will sell for $30.50 plus tax. Painted Rock has every right to be excited about this decadently sensual wine. I scored it 92 points.

The winery achieved all of this bright and layered flavour first by doing three micro-harvests in its Chardonnay block. Each harvest brought in grapes with different flavour profiles and ripeness. Then 40% of the wine was aged about eight months in new French oak, another 40% was aged in second-fill French oak. The final 20% was aged in stainless steel. Only the latter portion went through malolactic fermentation.

When blended, the ML fraction added texture. But preventing 80% from going through ML meant that the winery preserved the bright acidity – hard to do in a hot year like 2015 – which gives this wine a lively, tangy finish.

The aromatic and tropical characters of this wine led me to ask what clones are in the vineyard. The answer is French clone 548 and clone 76. Whoever advised Painted Rock owner John Skinner when he was planting advised him well.

ENTAV, the French Ministry of Agriculture organization that certifies clones, says this about these two clones: Clone “76 is a regular clone in terms of production and quality; the wines obtained are representative of the variety: aromatic, fine, typical and well-balanced. … [Clone] 548 has lower-than-average production due to small and loose clusters with high sugar potential; the wines are aromatic, complex and concentrated with good length.”

I have recently tasted two other Chardonnays that are also very good and not yet on the market. Little Engine Winery, currently under construction on Naramata Road, is owned by former Calgarians Steven and Nicole French. The tasting room, just south of the Red Rooster winery, is expected to be open by July 1. The plan is that 30% of the production will be Chardonnay.

“This whole property has three clones of Chardonnay,” winemaker Scott Robinson says. “It is a hot site, so we should get some good ripe fruit, particularly down on the corner there. We have clone 548 there. There is not a lot of that in the valley. It produces ripe tropical fruit characters.”

Little Engine’s Silver Label is similar in style to Painted Rock: Scott ages 50% in French oak (25% new) and 50% in tank. He allows some ML but does not let it go too far because he also wants to preserve the tropical fruit flavours and the refreshing acidity.

The Gold Label (or reserve) is more boldly oaked, with 15 months in French barrels. But the wine has so much fruit that it handles the oak very well. The wine is very elegant.

Both wineries have made good clonal choices and both have good winemaking.

Painted Rock is a winery with an established reputation while Little Engine will very quickly emerge as its equal. What is encouraging is that two of the Okanagan’s top producers are embracing Chardonnay, championing a wine that was out of favour five or 10 years ago.

There is no better way to re-establish Chardonnay than with several top flight examples.

Posted by JohnSchreiner at Goodgrog at 12:45 PM