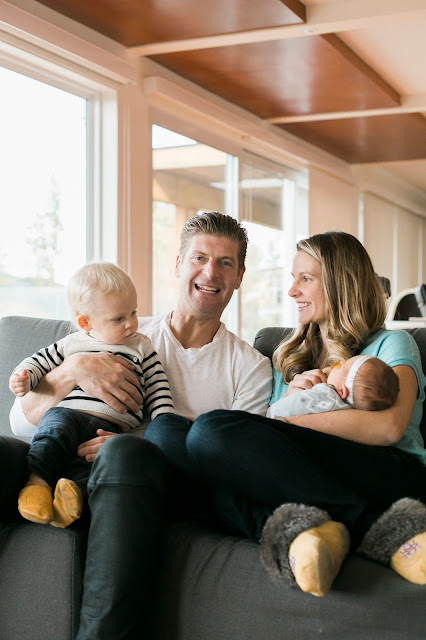 Photo: Trent and Ria Kitsch with the next generation

This winery, which opened its tasting room in late April with some of the best debut wines from a new producer, owes much to an innovative brand of men’s underwear.

The winery is owned by Trent and Ria Kitsch, members of a family that has been in the Okanagan for almost 100 years, prominent in construction and housing development. The owners, both Kelowna natives, bring a youthful energy to the wine business. Trent was born in 1979; Ria, who went to the same high school, was born three years later.

Tall and athletic, Trent was drafted from high school by the Colorado Rockies baseball team. That enabled him to play minor league ball in the United States while going to college on a scholarship. Deciding he had a better future in business than baseball, he finished his education at the elite Ivey School of Business at the University of Western Ontario.

He considered going into the construction business with his father but first decided to develop an idea that had come to him in 2006 from his experience as a ball player. The design of men’s underwear had been static and the garments were not as comfortable as they could be. So with the help of a clothing designer, he developed what is now known as the SAXX brand.

“I helped him build the business,” says Ria, who has a business degree from the University of British Columbia Okanagan. She topped that up with business studies in Austria (including wine appreciation in Krems). After backpacking in South America, she returned to Kelowna. She met Trent – he had not known her in high school – and was impressed with his entrepreneurial ambition.

“I thought it was ambitious to go after a whole category that hadn’t changed,” Ria says. “With my business background, he suggested we could do that together. That sounded crazy but I had nothing else to do. I was going to go to graduate school but instead, I did a practical graduate school.”

They set out to build SAXX together, sometimes with unconventional marketing. “We hustled hard,” Ria says. “We did things guerilla style – opening a van door on the side of Robson street to tell people about SAXX and trying to sell for cash; kind of ambushing the Vancouver Marathon; different things to get noticed but stay on budget, which was minimal.”

By 2010, the brand had been established and was poised to grow internationally.

“We had an exit strategy,” Ria says. “For us it was essential that if it was going to be big, it get into the hands of people that could make it big, because that wasn’t us. We needed to prove the concept – that men would buy it and rebuy it at the price we valued it at. $25 a pair is expensive for underwear. So we sold [the company] and that allowed us to pursue our Okanagan dream of planting grape vines and starting the winery.”

As interim step, they established a home building company. One of the houses constructed by that venture for a Kitsch family member looks over the 12.7-acre vineyard that was planted in 2013 and 2014. The three-car garage attached to the baronial home has been converted into a winery and tasting room.

The winery and vineyard occupies a plateau in northeast Kelowna, with a panoramic view to the south over the city. Okanagan Lake stretches into the distance almost to Peachland.

“We were lucky in having some great soil to plant and people in the industry helping us to understand what to plant,” Ria says. They reached out for advice to another old Okanagan family, the Stewarts of Quails’ Gate Estate Winery. That winery’s viticulturist offered valuable guidance on planting the four varieties now in the Kitsch vineyard.

The largest planting is Riesling, about five acres in two blocks. The other varieties are Chardonnay, Pinot Gris and Pinot Noir. 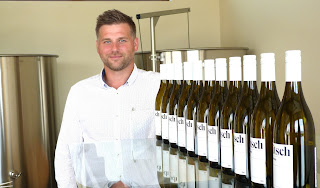 For their winemaker in 2015, Trent and Ria recruited Grant Biggs, (right) who had spent the previous two years working at at Tantalus Vineyards. Before that, he had been an assistant winemaker at Mt. Boucherie Vineyards, had done a crush with a large New Zealand winemaker, and had enrolled in the distance learning program from the University of California at Davis.

Grant was born in 1983 in Port Alberni. He honed an early appreciation of wine while working in Victoria restaurants, where he took a professional sommelier course.

“My grandfather, I think, is the reason by I pursued a career in wine,” Grant says, referring to Italian-born Elio Navé. “He used to order grapes from California – Zinfandel and Muscat – and we would make wine in the basement together when I was growing up. I associated the fondest memories with the foods that grandma was cooking and the wine that my grandpa was drinking.” He adds that his grandmother is French.

“Baby Duck was my gateway wine,” Grant laughs. “Coming from a French and Italian family, 19 was a number. It wasn’t the legal drinking age. So on New Year’s Eve, I would get my little thimble of Baby Duck. I think I was 11 when I wanted more.”

His appreciation of wine has grown considerably since then. “I look at wine as a form of art,” he says – in a tasting room where art is prominent on the walls. “I know wine is a blend of science and art, but to me it is a beautiful piece of art.”

“We have art here that is in our collection,” Ria says. “These are a little more contemporary in nature, a little more like street art. Our music is a little bit more soft electronic. We are just trying to be true to who we are without having any type of gimmick. We are here to fuse things that don’t go together all the time, like youthfulness and sophistication, or refinement but still approachability in our wines. That’s why we think people might be interested. It is pretty authentic. Hand-touched, small-batch, single-vineyard-bottled.”

Grant is remarkably meticulous in making wine. The vineyard’s two blocks of Riesling, planted in 2013, are about 100 metres apart in elevation. The grapes were picked on separate dates and were fermented separately, with differing techniques.

“The juice from one of the blocks was really clean,” Grant says. “I settled it really hard and did not take a lot of the lees into ferment. With the other block, I took a lot of lees and had a really heavy solids ferment. I used five different fermentation vessels [a pair of 2,000-litre stainless steel tanks, a neutral oak barrel and two glass carboys “just for fun”]. I think the barrel ferment adds a little bit to the body. I used VL1, a Chardonnay yeast, for the barrel ferment. I used a couple of nice aromatic yeasts for the two tank ferments.”

The Chardonnay grapes  were the first to be picked last fall in the Kitsch vineyard, on September 3, an early pick necessary to maintain the acidity in a hot vintage. Grant’s model was a wine with the freshness of Chablis, not with the boldness of what he calls a “California fruit bomb.”

“It was fermented in French oak; 40% was second fill and 60% was neutral,” Grant says. “I was hoping to achieve a gateway to Chardonnay. I did not want to mask the youthfulness of the fruit.” The wine had 50 days in barrel, with several lees stirrings and was then racked into stainless steel, with a blast of CO2 to keep the lees in suspension. “I wanted it to be more of a texture driven wine with a good backbone of acid, without going through malolactic fermentation.”

The Pinot Gris and the Pinot Noir were made with fruit from a young vineyard in Lake Country. Grant deliberately sourced grapes from a young vineyard to avoid the contrast in style that would have occurred if he had used mature vines prior to fermenting the first harvest from the young Kitsch vineyard.

The other strategy here is to make single vineyard vines with grapes just from the north Okanagan – north of the Bennett Bridge, Grant says.

“I don’t want to source fruit from the south,” Grant says. “From here on, if there is any fruit to be had, it will all be from the north Okanagan. And that fruit will go into a single vineyard wine as well. I would never take that and put it in with any of our fruit. You need to feel that sense of place from our property.”

In 2015, the first vintage for Kitsch, the winery produced about 1,000 cases of wine, including 250 cases of Pinot Noir still in barrel.

Kitsch Pinot Gris 2015 ($19 for 178 cases). Two-thirds of the grapes for this wines had 20 hours of cold soaking on the skins to bolster texture and flavour. The wine begins with aromas of citrus and pears. On the palate there are flavours of pear and ripe apple with a hint of anise on the finish. The texture is full and juicy, but with a clean, refreshing finish. 92.

Kitsch Chardonnay 2015 ($20 for 202 cases). This barrel-fermented wine begins with a lightly gold colour in the glass and with aromas of citrus and apple. On the palate, there is a medley of fruit ranging from melon to apple to pineapple and lemon. There is a very subtle note of oak on the finish. Good acidity gives this wine a bright and lively finish. 92.

Kitsch Riesling 2015 ($22 for 392 cases). This wine begins with aromas of lemon and lime, echoed on the palate. The flavours are surprisingly concentrated for fruit from young vines, with a vibrant tension created by balancing nine grams of acidity with 15.4 grams of residual sugar. This is good Riesling terroir because the young vines also contributed a spine of minerality. 92.

Kitsch Pinot Noir 2015 (barrel sample). While this wine likely will spend several more months in barrel, it already has a silky texture. There are aromas and flavours of cherry with a hint of toasty oak on the finish. This is a pretty Pinot Noir in a style sometimes referred to as “feminine.” 90-91.

Posted by JohnSchreiner at Goodgrog at 2:21 PM