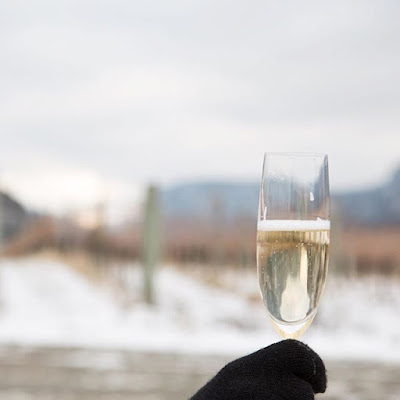 In the fall of 2010, Vineyard & Cellars celebrated its 20th vintage by hosting an extensive tasting of its reserve wines.

The wines in the tasting included a 1994 Reserve Brut R.D., which means recently disgorged. If my files are correct, the winery released its next R.D. sparkling wine from the vintage of 2004. That wine would have been released about three years ago.

Happily, the winery has begin to release is classy R.D. wines a little more often now.

has produced an excellent sparkling wine every year since the winery was founded in 1991. For many of those years, the production volume was too limited (or sold too quickly) to allow the winery to hold back a portion each vintage for extended aging on the lees.

In recent years, the winery has been able to do that. The result is a series of sparkling wines that stand side by side with .

Gold Label Brut, the winery’s bread and butter sparkling wine, spends two years on the lees before being disgorged, bottled and released. Wines made in this style are typically crisp and fresh. At $24 a bottle, this wine represents outstanding value for its quality.

The R.D wines necessarily are more expensive, reflecting the additional years these wines are aged. The reward for tying up capital for another five years to eight years is the enhanced complexity that the wines develop from extended lees contact.

These are not wines to be squandered with the party trick that, alas, has become popular: opening bottles with a sabre. That is quite dramatic; not much wine sprays over the floor when the sobering is successful. Of course, it is a mess if the neck does not break off cleanly.

But these wines are so good that you will want to savour every drop rather than sabre every drop.

Brut Rosé 2011 R.D. ($33). The base for this wine is 65% Pinot Noir and 35% Chardonnay. After secondary fermentation in the bottle, the wine aged three years on the lees before being disgorged. The dosage is 10 grams of residual sugar per litre – just enough to add flesh to the texture while retaining a crisply dry finish. With its pink hue and fine bubbles, the wine gives a fine display in the glass. The aroma is fruity. Creamy on the palate, the delicious wine delivers flavours of strawberry and brioche that coat the palate and linger on the finish. 92.

Blanc de Blancs 2008 R.D. ($40). Made with Chardonnay grapes, this wine, after its secondary fermentation, remained seven years on the lees, to be disgorged in March 2015. It is finished in the brut style, with almost no sugar in the dosage. In the glass, the wine has a fine and vigorous mousse. It has nutty toasty aromas and flavours, with hints of lemon and green apple and a crisp finish. The elegance of this wine is quite striking. 92.

Reserve Brut 2007 R.D. ($40). This is 50% Pinot Noir, 50% Chardonnay. This wine has had approximately eight years on the lees before being disgorged. In the glass, the mousse is fine and active. The wine has aromas of citrus and toast, going on to delicate fruit and brioche on the palate. The finish is almost austerely crisp, but not so as to take away from its classy elegance. 92.
Posted by JohnSchreiner at Goodgrog at 11:25 AM