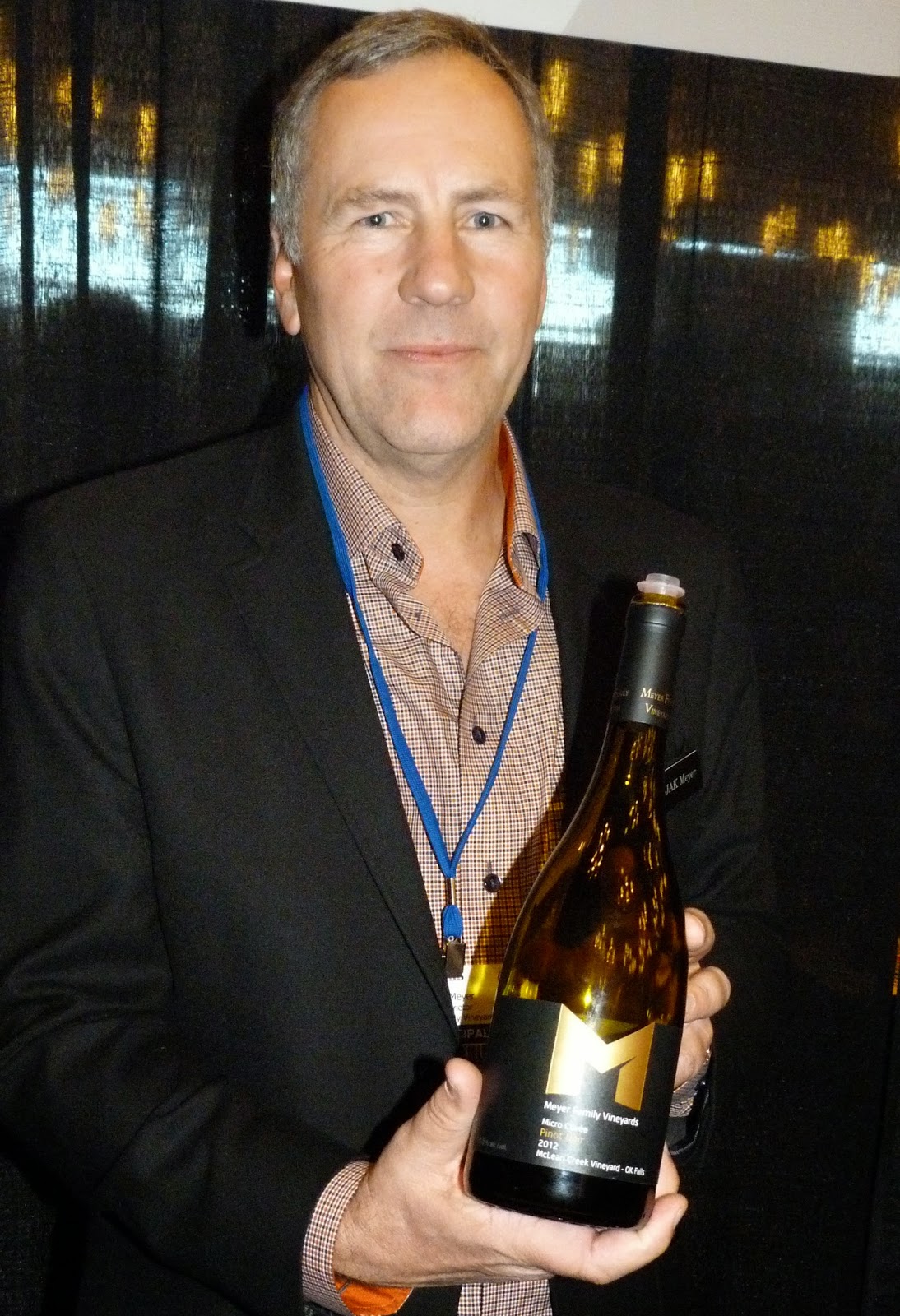 From time to time, a debate emerges about whether the Okanagan needs a signature grape variety.

If you ask Chris Carson, the winemaker for Meyer Family Vineyards, he will make the case for Pinot Noir.

I am inclined to agree, especially after tasting the winery’s yet-to-be released 2012 Micro Cuvée Pinot Noir from its vineyard. Here is a rich and intense wine that makes a statement both of the varietal and for the winery.

Of course, there are qualifications. South of McIntyre Bluff and in the , there are varieties that perform better than Pinot Noir. My favourite red from Oliver and Osoyoos vineyards is Syrah.

North of McIntyre Bluff, however, there are solid to spectacular Pinot Noirs grown in vineyards all the way from to . We are talking world class Pinot Noirs that stack up well against top examples from and and .

Mission Hill, after all, took home a best in class award at a last fall for its Martin’s Lane Pinot Noir 2011. At the recent Vancouver International Wine Festival, winemaker had a bottle of the Martin’s Lane 2012 under the table. It is an even better wine.

Mission Hill proprietor Anthony von Mandl is in the early stage of planning a dedicated Pinot Noir winery. He also agrees with Chris on the potential of the variety for the Okanagan.

“One of the challenges [of positioning the Okanagan in the world of wine] is that we have to be known for something,” Anthony told me recently. “I think what is very exciting about this is that, while great Pinots are so challenging to grow and so challenging to make, I do think that this is the promise of the future for the valley.”

During the recent Vancouver International Wine Festival, Meyer had its Pinot Noirs at numerous events and tastings – along with its equally stunning Chardonnays.

Now based near , Meyer actually started as a Chardonnay-only house, and something of a 600-case hobby winery at that. JAK Meyer, who was beginning a gradual transition from a career in finance, bought a three-acre Chardonnay vineyard near Naramata and produced the first wines in 2006.

Once he started selling the wine in early 2008, he recognized he was never going to make money at 600 cases a year. He commissioned a design for a larger winery to expand his production. Before that year was out, two things happened to change his focus.

First, he saw Chris Carson’s resume. It was so strong that JAK, knowing he would need a winemaker when the winery was built, snapped him up. Born in , Chris was attracted to winemaking while backpacking in and working in vineyards. He promptly earned a winemaking degree there and polished his credentials with winemaking jobs in and .

“Chris’s background was exactly what we are doing – Chardonnay and Pinot Noir,” JAK recalled in an interview last year. “He spent a few years in Montrachet. It was a really good fit. You are not going to find that kind of fit easily.”

Secondly, JAK was able to buy the assets of a stillborn winery near late in 2008, in a court-ordered sale. He scrapped plans for the Naramata winery in favour of refurbishing the Okanagan property and its 16 acres of vines. That included pulling out Gamay, Cabernet Franc and Merlot and replacing them primarily with Pinot Noir and Chardonnay.

“We would like to be known as specializing,” JAK says. The winery makes a little Gewürztraminer and Riesling and will release a sparkling wine next year. However, the majority of its production – between 5,000 and 8,000 cases a year – is Pinot Noir and Chardonnay, from estate grapes and from select contract growers.

And Chris Carson is a happy winemaker. “Pinot Noir has been my focus for 15 years,” he says.

JAK Meyer recently showed the winery’s principal products to wine guru Steven Spurrier. He was clearly impressed. Spurrier’s notes include quite favourable comparisons to French Burgundy – the kind of accolades that Canadian wineries are getting increasingly often from leading British critics.

Here are my notes and scores on the wines currently available from Meyer.

Gewürztraminer 2012 ($18). This light-bodied wine begins with appealing floral and spice notes in the aroma, leading to grapefruit flavours and a dry finish. 87.

Chardonnay 2012 ($20 for 555 cases).  This is a crisp and refreshing wine. It was fermented in stainless steel and left on the lees for four months to add texture. It has citrus aromas and flavours, with a lively tangy finish. 88.

Chardonnay 2011 ($30 for 340 cases). This winery designates single vineyard wines to showcase the terroir. The winery believes that the hallmark of the vineyard – where the winery is located – is “a slight ginger spice flavour.” My own notes also identify citrus and tropical fruit aromas and flavours, with a touch of the buttery character imparted naturally by malolactic fermentation. The bright acidity will give this wine good cellaring potential. 91.

Meyer Tribute Series Chardonnay 2011 ($30 a bottle for 394 cases). The fruit for this wine are from the 16-year-old vines in the winery’s Naramata vineyard. Fermentation began in stainless steel and finished in French oak, with 10 months lees aging. This technique ensures that the wine has bright fruit – citrus, green apple with very subtle oak – and a rich texture. This is an elegant wine. Spurrier said it is like “a good St. Aubin 1er Cru. 91.

Meyer Micro Cuvée Chardonnay 2011 ($65 for 105 cases). Also made from the Naramata vineyard, this wine is the four best barrels from that vintage (actually two barrels and a puncheon). The wine is packed with intense tropical fruit flavours in a richly textured wine. The bright acidity will allow this wine to develop even great complexity in bottle. 93.

Pinot Noir 2011 ($25 for 930 cases). This is a drinkable and pretty Pinot Noir with cherry aromas and with flavours of cherry and plum. The texture is both silky and juicy and the finish lingers. 89.

Meyer Reimer Vineyard Pinot Noir 2011 ($40 for 219 cases). The Reimer Vineyard overlooks the Harvest Golf Course in . The wine shows best if decanted. It begins with cherry aromas. On the palate, the cherry flavours are vibrant. The texture at first is firm but, with breathing, it begins to show fleshy textures, with a touch of spice and earthiness on the finish. “Very expressive and impressive,” Spurrier wrote. 90.

Pinot Noir 2011 ($40 for 323 cases). The low tonnage harvested in the 2011 vintage – a mere two tons an acre – result in excellent concentration in this wine. It begins with those earthy notes in the aroma that a Burgundian might want to call barnyard (it’s a compliment). There is also cherry in the aroma and flavour along with a touch of toasted oak from the 10 months the wine spent in French barrels. 91.

Meyer Micro Cuvée Pinot Noir McLean Creek Vineyard 2012 ($65 for 110 cases). This wine is primarily Pommard Clone 91, which is turning out to be the best performing of the four clones planted at McLean Creek. The wine is dark in colour with aromas and flavours of cherry and strawberry. While the texture is silky, this is a wine with power and with longevity. Spurrier said it is “in the Vosne-Romanée style, lots of character and a good future.” The winery advises cellaring this wine eight to 10 years. It will be released later this year. 94.

Posted by JohnSchreiner at Goodgrog at 11:31 AM

I enjoy your live "Chronicle" on wine very much.

Every Winery (and Chateau) is a "Hortus Conclusus" an Enclosed Garden for Enlightenment, and Grounded"Philosophy" (Terroir?)

Your 'telling of the story' is delightful.

The Meyer' s inclination towards Pinot Noir and Chardonnay is in very good taste... we will have to visit one of these days.

We also agree with you that Shiraz (Syrah?) fits the South Okanagan best.