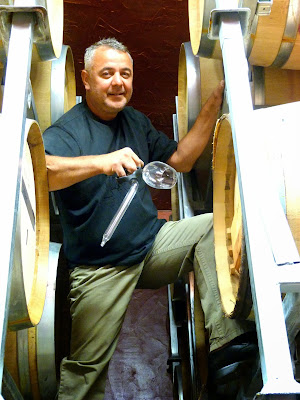 It has been one of those summers, filled with house guests, monthly visits to the Okanagan and revision of one of my wine books.

In between all of this, I have tried to stay on top of wine reviews – not always with the alacrity they deserve. I did not get down to all of the wines from Cassini Cellars before several were sold out. Obviously, Cassini fans need not wait on my reviews to snap these good wines.

Cassini is a well-located winery on Highway 97, midway between Oliver and Osoyoos, which has developed a house style that has repeated now for several years. Almost without exception, the wines are bold and packed with flavour.

The Cassini samples also included several verticals of the winery’s leading reds, with the winery owner Adrian Cassini looking for feedback on the cellaring potential of the wines.

The oldest wines were from the 2007 vintage. They are still drinking well, but the fruit has begun to show signs of fading prematurely. The problem, in my view, is that winery used synthetic closures in its initial vintages. These are dubious closures when wines are designed for long term aging. Even though I am told the current generation of synthetic closures are much improved, I note that returned to natural corks for his Collector’s Series reds in 2009. He also uses screw cap for whites and rosé wines.

There is no reason why the Cassini reds, with good closures, will not cellar well for at least a decade.

Cassini Cellars Unoaked Chardonnay 2012 ($19). This wine is an excellent example of a typical Cassini wine: it is packed with fruit, beginning with aromas of pear and apple and tasting of apples, peaches and passion fruit. The wine has good length and a long, crisp finish. 90.

Cassini Cellars Chardonnay Reserve 2009 ($29 for 375 cases). The wine presents an appealing gold hue in the glass, along with buttery aromas of peach and tangerine. The generous palate has flavours of peach, ripe apple, tangerine, vanilla and spice, all framed by subtle oak. The wine has a synthetic cork and should be consumed now, when it is at its peak. 92.

Gewürztraminer Muscat 2011 ($19 for 611 cases). The blend includes just seven percent but that is enough to give this swaggering wine spice orange peel aromas and flavours of fine Scots marmalade, with raisins on the off-dry finish. 91.

Cassini Cellars Rosé 2012 ($19 for 444 cases). This is an exuberantly fruity rosé with aromas and flavours of cherries, raspberries and strawberries, with a long finish. It is an unconventional blend - Cabernet Franc, Merlot, Marsanne and Roussanne – but no less delicious for that. 89.

Cassini Cellars Merlot 2011 ($19 for 1,340 cases). Here is a ripe and powerful Merlot, with aromas of spice and red fruit and with flavours of black currant, black cherry and vanilla with a hint of sage on the finish. The rich favours go on and on. 90.

Cassini Cellars Pinot Noir Reserve 2010 ($N.A.). This is a pretty wine with strawberry aromas leaping from the glass. The silky palate has flavours of strawberry and cherry. 88.

Cassini Cellars Quattro Rosso 2010 ($29 for 608 cases). This is a blend of 67% Merlot, 21% Cabernet Sauvignon, 11% Cabernet Franc and 1% Syrah. It begins with aromas of plum, vanilla and leather, leading to spicy flavours of plum, mocha, coffee and vanilla. The tannins are still firm, making this a good candidate for cellaring. 90. 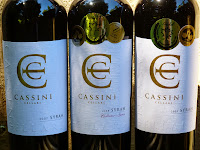 Cassini Cellars Collector’s Series Syrah 2007: The wine begins with a hint of white pepper and dark fruit on the nose, leading to flavours of plum and chocolate. The wine is tasty but clearly has peaked. 88.

Cassini Cellars Collector’s Series Syrah 2008: The wine begins with earthy, peppery aromas; flavours of plum, liquorice and chocolate with pepper on the finish. This wine is at its peak. 90.

Cassini Cellars Collector’s Series Syrah 2009: The wine begins with complex aromas of spice, smokiness and plum. On the palate, there are layers of fruit – black cherry and black currant – turbocharged with black pepper, liquorice and vanilla on the long finish. 91.

Cassini Cellars Collector’s Series Syrah 2010: ($29 for 550 cases). This wine begins with aromas of vanilla, liquorice and plum. On the palate, there is a nice peppery bite that gives way to red fruit and vanilla on the palate. The soft ripe tannins mingle with the earthy, gamy flavours of the variety. The finish is long. 90.

Cassini Cellars Syrah 2007: ($NA). This wine has held its bold, fruity flavours better that its big brother in spite of a synthetic cork. The wine still had a core of earthy black cherry flavours. 90.

Cassini Cellars Syrah 2008: ($NA). This is a gamey, even rustic, Syrah, with aromas and flavours of pepper, black cherry and plum. The muscular earthiness of this wine, with 14.8% alcohol, is satisfying. 90.

Cassini Cellars Syrah 2009: ($NA). This begins with a smoky, peppery aroma with plum and black cherry flavours along with earthy and gamey notes. The long ripe tannins contribute to the wine’s bold, generous finish. 91. 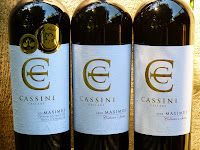 Cassini Cellars Maximus 2007: ($34). This is the winery’s top of the line blend. There are flavours of black currant, coffee and vanilla but the fruit seems to be drying out, leaving a slight bitterness. Even with a decorative wax seal on top of the closure, the synthetic closure seems not to be doing the job. 88.

Cassini Cellars Maximus 2008: ($34). This wine, also closed with a synthetic cork, is still full of aromas and flavours of pepper, black currant, vanilla, coffee and dark chocolate. The blend is 63% Cabernet Sauvignon, 31% Merlot and 6% Malbec. The wine has a firm, muscular structure. 90.

Cassini Cellars Maximus 2009: ($34). This wine, closed with natural cork,  is 48% Cabernet Sauvignon, 39% Merlot, 12% Cabernet Franc and one per cent Malbec. It begins aromas of vanilla, black cherry and black currant. Rich and ripe on the palate, it delivers flavours of cassis, mulberry, and blueberry, with a touch of cedar and spice on the finish. This wine will age very well. 92.

Posted by JohnSchreiner at Goodgrog at 5:01 PM