Admiral Shorts and his fleet of ports 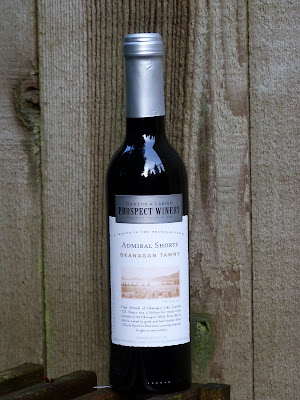 Given the limited size of the market for ports, I asked the winery for its market rationale. I asked a similar question of one or two other domestic port producers. The replies confirmed that these are not always wines that the marketing department asked for. These are wines that the winemakers wanted to make.

I was told: “He says that he’s been quietly and patiently observing the development of these almost 20 year old barrels of wine that he was lucky enough to have access to. In the last year or so they were tasting surprisingly well and he decided they were ready for bottling and sharing with the public.”

For those of us who appreciate fortified wines, we are lucky to have winemakers like Wade around. This is a delicious 90-point wine with aromas of spice and vanilla and intense cassis flavours. I enjoyed it with cheese. It would pair well with fruit cake, chocolate or walnuts, all the usual pairings with port. The price, $17.99 for a half bottle, astonishes for wine that has been barrel-aged this long.

It is available in B.C. liquor stores. Well, actually, there are 94 bottles divided among three stores – one in Kamloops, one in Burnaby and one in Kamloops. Of course, your local liquor store will bring it in for you if you ask. It will also be in the Mark Anthony stores.

That spotty distribution by the B.C. Liquor Distribution Branch tells something about the market for port through the LDB stores.

Sales of non-VQA domestic port in that 12 months totalled $851,000, down about 1%. The wines in this group include primarily Brights 74 ($8.59 for a full bottle) and Okanagan Cellars from Calona ($19.99 for two litres). These are brands that have been around for a long time: Brights 74 (there is an even cheaper sherry) may be the oldest Canadian wine brand. Currently, the LDB has 2,270 bottles of the port spread among 162 stores. These are not for the port connoisseur but for those who want wines that are sweet and potent.

Admiral Shorts Okanagan Tawny is a wine that a connoisseur will enjoy. The name refers to a man named Captain T.D. Shorts who operated a freight boat for a few years in the 1880s on Okanagan Lake. (Prospect Winery names all of its wines after obscure facts from Okanagan history.)

The size of the domestic market for VQA-quality domestic ports probably is larger than the LDB’s sales figures show because most of these wines are never listed by the LDB in the first place. Wineries hand sell them directly or through channels like VQA stores. When you dig through winery websites, you find a surprising number of these wines, including blackberry and other fortified fruit wines.

Some points of definition: very few are called Port. Under an agreement Canada signed a decade ago with the European Union, our wineries have had to stop using European geographic names on Canadian wine. Some Okanagan wineries are testing that. Dirty Laundry Winery proposes releasing a wine called “A Girl in Every Port” while Pentâge Winery is thinking of releasing a very good fortified Zinfandel called “A Port in a Storm.” Good luck.

Most of these wines are made like real Port, although not with authentic Port varieties, which have just been planted in the Okanagan. That means that super-ripe grapes or fruit is crushed and fermented about half way to dryness before being fortified with brandy or grain alcohol. That arrests fermentation, leaving enough natural sugar in the wine to rate between 8 and 10 on the LDB sweetness scale, with between 16% and 19% alcohol. The wines are finished in bottle or barrel before release, a process that can take years if the object is to make a tawny style.

Here, from a quick canvass of memory, notes and a few websites, are some examples of VQA or VQA-quality ports available in the LDB, VQA stores or directly from wineries (since fruit wines are not VQA eligible). All are sold in 375 ml bottles unless otherwise indicated. The La Frenz wines, and a few others, are sold out.

Fruit wines are in italics.