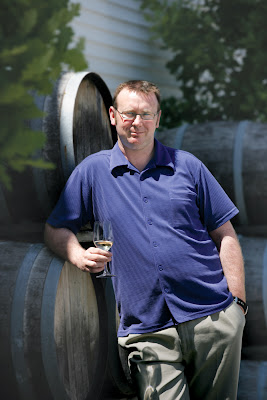 
CedarCreek Estate Winery has recruited a senior Australian-born winemaker to take over from Tom DiBello, who resigned last month.

Darryl Brooker, who came to Canada in 2003 to supervise the building and launch of Flat Rock Cellars near Jordan, takes over the CedarCreek cellar in mid-May.

Darryl was born in Canberra in 1973. He developed an interest in wine while serving in the Australian Navy – where tours of duty included visits to wine regions around the world. He left the navy to get a wine science degree at Charles Sturt University and a graduate diploma in wine business from the University of Adelaide.

He started his winemaking career in the vineyards at Mountadam Vineyards in the Barossa Valley and then went on to a four-year-stint at Villa Maria Estates Winery in New Zealand before coming to Ontario. Flat Rock, a producer of Pinot Noir, Chardonnay and Riesling, is, technically, a leading edge Ontario winery with gravity-flow architecture designed for gentle handling of grapes.

In addition to making Flat Rock’s initial vintages, Darryl also convinced the owners to package the wines under screw-cap closures at a time when this was still a radical idea in Ontario. “That came over with me from New Zealand,” he told me in a 2004 interview. Villa Marie’s wines were all under screw cap.

He will not need to fight that battle in the Okanagan. CedarCreek has switched most of its wines to screw cap in the past two vintages, over the initial scepticism of Senator Ross Fitzpatrick, the scion of the family that owns the Okanagan winery.

Since 2005, Darryl has been the winemaker at Hillebrand Estates Winery, Andrew Peller Ltd.’s premium boutique winery near Niagara-on-the-Lake. He also has supervised the winemaking at Thirty Bench Winery, another boutique winery and a Riesling specialist that Peller bought several years ago.

The move to CedarCreek will allow Darryl once again to work primarily with estate-grown grapes. When he joined Flat Rock, an exclusive estate producer, he described that as “a bonus” for the winemaker. Like Flat Rock, CedarCreek is largely self-sufficient in grapes, with vineyards in both the central Okanagan and near Osoyoos.

For a winemaker, CedarCreek must be a dream assignment. It is already one of the Okanagan’s best producers; it has been Canada’s winery of the year twice, among a long list of other rewards.

By coincidence, the winery just released four of its 2009 white wines and three of its premium Platinum (or reserve) reds from 2007 at a tasting this week in Vancouver. Here are my notes.

Pinot Gris 2009 ($17.90): The style here is crisp and fruit-forward, with just enough barrel-fermented wine (17%) to add a spicy and toasty note to the finish. The aromas and flavours recall melons, apples and guava. Production: 4,184 cases. 88

Riesling 2009 ($17.90): The touch of residual sugar in this balance balances the fresh acidity quite superbly and lifts the fruit flavours. Here, one finds aromas and flavours of lime and pineapple, with a fine mineral backbone. Production: 1,093 cases. 89-90

Gewürztraminer 2009 ($17.90): Bottled six weeks ago, this wine is still developing in the bottle. Right now, it begins with delicately spicy aromas. On the palate, there are flavours of lychee and lime. The flavour palate will become richer with a few more months of cellaring. The finish is slightly off-dry. Production: 2,842 cases. 88

Ehrenfelser 2009 ($18.90): At CedarCreek, this wine is called fruit salad in a glass. Arguably, one of the world’s best Ehrenfelsers, it begins with glorious aromas of nectarines, apricots and peaches and delivers mouth-filling flavours of passion fruit and mango. The finish is slightly off-dry but the balance is so perfect that the wine can be enjoyed on its own or with food. Only 1,481 cases were released. It will be sold out by mid-summer, easily. 92

Platinum Syrah 2007 ($39.90): This is CedarCreek’s first reserve Syrah. Made from Osoyoos-grown grapes, the wine was aged 18 months in top-quality French oak. That’s why the wine smells so classy, with oak co-mingled with plum and pepper. The flavours of this full-bodied wine include plum, black cherry, chocolate and a medley of spices, from fruit cake to deli meats. Production: 600 cases. 90

Platinum Cabernet Sauvignon 2007 ($39.90): This elegant and polished wine has been tweaked with 8.6% Merlot and 3.2% Petit Verdot in the blend; and also with 18 months in pricey French barrels. The wine begins with aromas of black fruit and chocolate with a hint of mint. On the palate, there is spice, blackberry, leather and coffee. The ripe tannins make the wine smooth and full. Production: 544 cases. 90-91

Platinum Malbec 2007 ($55.00): CedarCreek’s first Malbec, and most expensive table wine, this is a tour de force: 20 months in expensive French oak. I can do no better than to quote my notes after tasting this in barrel last fall: “It is one of the best Malbecs I have tasted in British Columbia (or Argentina). The wine begins with an aroma of spice, violets and lavender that explodes from the glass. On the palate, there are flavours of black cherry, spicy dark plum and chocolate.” At the recent tasting, I also noted blackberry, coffee and leather. This is a complex and satisfying wine. Production: 84 cases. 95 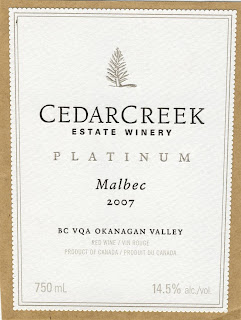 Posted by JohnSchreiner at Goodgrog at 2:01 PM