Bargain wines offered by Neck of the Woods - and others 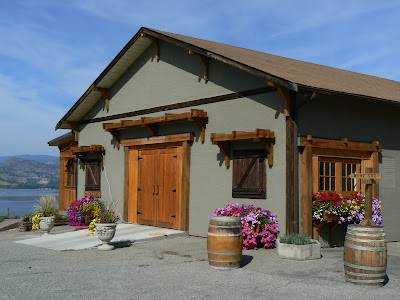 A week-long case sale of wines at Langley’s Neck of the Woods Winery, which begins March 26, looks like a harbinger of bargain wines for BC consumers.

The winery is offering four varietals – Chardonnay, Gamay, Merlot and Zweigelt - at $99 for a dozen. Consumers can buy mixed cases at the same discount. This works out to just over $8 a bottle.

The winery is also offering a 20% discount on case purchases of any of the other four wines in its tasting room. Plus, there is a six-bottle sampler pack for $69.99.

Coincidentally, that announcement came on the heels of an offer of bargain-priced bulk wines from the Holman Lang group of wineries. The group circulated an email among other wineries, offering a total of 95,970 litres (the equivalent of 10,650 cases) of wine. The wines are selling anywhere between $2 and $7 a litre.

This is not an offer to consumers directly. The 21 wines are not yet bottled. Other wineries have begun to take up some of the offer, likely to blend the wines with their own budget brands.

It is not unusual to see wineries selling some wines in bulk, either to move surplus wines or to move wines that are left over when the main blends are done. Another premium Okanagan winery is currently selling a modest amount of red wine (Syrah and a Bordeaux blend) that is surplus to its planned production from the 2009 vintage.

The volume offered by the seven-winery Holman Lang group is a larger than the usual bulk offer seen in the Okanagan. It is perhaps a sign of the softer market for domestic wine during the last year.

Thanks to the slowdown in the economy which began in 2008, many BC wineries have had to get creative to keep their wines moving and not clogging up their warehouses.

It does not help that the economy slowed down just as recently planted vineyards have begun to produce.

Bill Collings, a grower at Okanagan Falls, has produced an interesting analysis of grape production trends in the current newsletter of the British Columbia Amateur Winemakers Association.

The 2009 grape harvest dropped by 20% due to killing frosts in the previous winter. Collings estimates that the 2009 wine production was 9,600,000 litres – “yet some wineries had sales problems.”

He estimates that if the 9,500 acres of vines now planted in BC achieve full production, there will be enough grapes for between 17 million and 23 million litres. “If wineries have sales problems with short tonnages,” he warns, [selling the wines from] “projected full tonnage could be seriously problematic. … Our industry could be in for a serious shakeup if the economy does not recover quickly [while] our acreage comes into full production.”

Many established producers have already responded by rolling back some wine prices, by releasing new lines of value-priced wines and by exporting to markets that were being ignored when BC consumers were drinking almost all BC wines. These strategies are serving the established wineries well.

But this is a tough market for wineries that have not been around that long and have just started to build followings.

That seems to explain the bargain offerings from Neck of the Woods and from the Holman Lang group.

With the significant exception of Lang Vineyards (opened 1990), the other Holman Lang wineries have been open for less than 10 years: Stonehill (2001), Spiller (2003), Mistral (2005), Soaring Eagle (2007), K Mountain and Zero Balance (2008). That is hardly enough time to establish strong consumer and restaurant followings. That’s why there is 10,000 cases of wine that is not even bottled.

Neck of the Woods also has an identity issue. The winery, on 232nd Street in Langley, opened in 2002 as Glenugie Winery. After the death of founder Gary Tayler, it was purchased in 2008 by Ewen Stewart, a Whiterock developer with a real estate project and another winery project in Abbottsford.

With the help of a marketing consultant, the Glenugie name was replaced – not once, but twice. The Neck of the Woods label only appeared last fall. The winery needs to build traffic at its Langley location and bargain wine prices are the tried and true way of doing that.

Thus may be a tough time to be in the wine business but it is a good time to be a consumer.
Posted by JohnSchreiner at Goodgrog at 2:33 PM