Nk'Mip Cellars is like a family for Lindsay Anderson 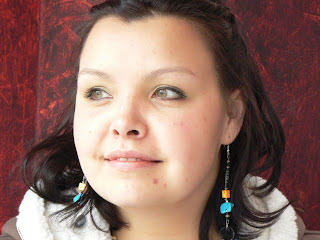 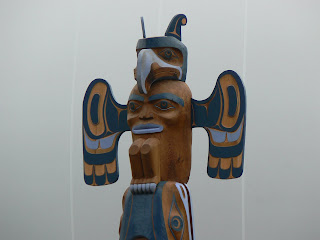 Lindsay Anderson suffered heat stroke twice during her first wine industry job when she work in the Vincor vineyards near Osoyoos.

In spite of that initiation, she has become deeply involved. She has taken every wine industry course offered by Okanagan College and she is one of the guest services managers at the Nk’Mip Cellars winery.

During the 2010 Olympics, she has also taken a turn at the Four Host Nations Pavilion which has Nk’Mip Merlot and Chardonnay in its restaurant. Diners there may not fully appreciate how much First Nations history there is in each glass.

Lindsay is member of the Osoyoos Indian Band which operates Nk’Mip Cellars in partnership with Vincor. Nk’Mip was North America’s first aboriginal winery. “Nk’Mip is something that all of our band members are proud of,” Lindsay says.

In my judgment, everyone associated with the British Columbia wine industry takes pride in Nk’Mip’s winemaking accomplishments as well as in the Band’s overall contribution to B.C. wine growing.

The involvement began with the establishment of Inkameep Vineyards at Oliver in 1968. It grew in 1980 when the Band built the building which T.G. Bright & Co. leased for the winery that has become Jackson-Triggs at Oliver. Producing alcoholic beverages on a First Nations reserve was very contentious at first but Sam Baptiste, the band chief at the time, toughed out the criticism. He believed, correctly, that the winery would provide steady and well-paying careers for Band members.

Subsequently, the entrepreneurial Band launched a number of other businesses on the reserve. However, Clarence Louie, the current chief, told me (before Nk’Mip winery opened) that the Jackson-Triggs winery jobs were still among the best career choices.

The Band contributed in a major way to the success of Jackson-Triggs when, in the late 1990s, it leased to the winery the hundreds of acres of sagebrush that now grow the best grapes in the south Okanagan.

The Nk’Mip winery at Osoyoos was developed in 2000 as an anchor for a resort and condominium project after the Band’s original idea, a casino, failed to win government approval. No doubt, the Band would have succeeded with the casino but, unlike the winery, it would hardly have been a brilliant North American first.

Vincor was engaged as a 50% partner because of its technical resources and its marketing ability. Nk’Mip is making about 18,000 cases a year (its maximum capacity) and Vincor is selling it all within Canada.

Vincor also set up a mentoring structure. Winemaker Randy Picton has two winemaking assistants who are First Nations. One is just graduating from Lincoln University in New Zealand and the other is about to enrol there.

Lindsay Anderson, who was born in Vernon, worked in various other Band businesses as a teenager before becoming one of the early employees at Nk’Mip. “It is a place where I can continue to keep learning,” she says.

In addition to working in vineyards, Lindsay also spent six months in the laboratory at the Jackson-Triggs winery, becoming adept enough in the job to pursue that side of wine. “They tried to keep me,” she recalls, “But I wanted to go back to Nk’Mip. It’s a lot like a family. We’ve really gotten close.”

She likes leading winery VIP tours, along with all of the other tasks involved in hospitality at what is one of the Okanagan’s busiest tasting rooms. Her vineyard and her laboratory experience have equipped her to answer most questions that wine tourists are likely to ask.

Even the naïve questions: more than once, she has been asked whether Band members have any ceremonies to “bless” the grapes. No, they don’t. They leave it to Mother Nature.

Does she have a favourite wine? “When I started at Nk’Mip, I didn’t drink wine,” she says. “But I immediately fell in love with Chardonnay.”

I’d say she’s developed a pretty good palate.
Posted by JohnSchreiner at Goodgrog at 10:57 AM