New releases from CedarCreek to include a stunning Malbec 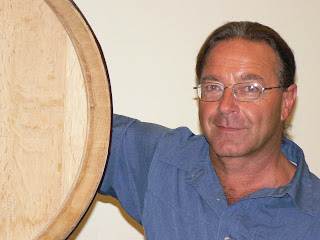 established himself as one of the best Canadian winemaker imports from California.

He is a graduate of the University of California at Davis. He started his winemaking career with Warren Winiarski's legendary Stag's Leap Wine Cellars in the Napa Valley. Then he headed off to make wine in Australia, Arizona and Washington before settling down, or so it seems, with CedarCreek in the Okanagan in 2000.

One of Tom's strengths is his excellent attention to detail. Ross Fitzpatrick, the former senator who owns CedarCreek, once told me that Tom is "a worrier" about his wines - a positive thing in winemaking where nasty surprises happen when a cellar is not managed carefully. 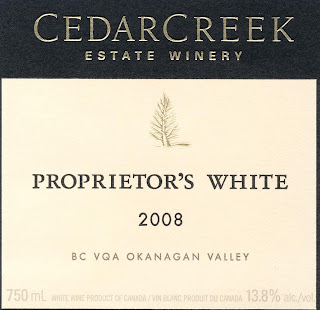 The detail-oriented winemaking at CedarCreek expresses itself in wines of superb quality, right across the winery's portfolio.


The current releases include the 2008 Proprietor's White, selling for only $12.90. This is the wine for fans of the overpriced Conundrum from California. Like that wine, this is a complex blend: 40% Chardonnay, 18% Pinot Gris, 13% Riesling, 12% Gewurztraminer, 11% Pinot Blanc and 6% Ehrenfelser. It is a juicy, aromatic blend tasting of pears and citrus with a hint of sweetness on the finish. A bargain! 87 points.
The winery has released 3,313 cases.

Another bargain is the Pinot Blanc 2008 ($14.90), a crisp, tangy white with flavours of green apples, notes of yeast from the lees and a firm backbone of minerals. 88 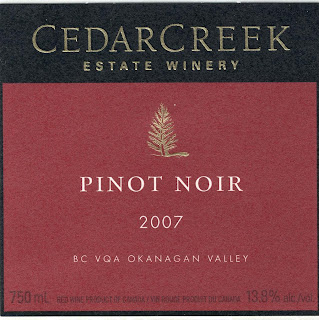 by fermenting a quarter of it in French oak and aging it there for four months. The oak is so well integrated with the wine that it merely expresses itself with hints of spice and toastiness. The floral aromas and flavours of pears, peaches and guava make this a satisfying wine with a lingering finish. 90


Pinot Noir is one of the signature wines at CedarCreek, which has released 1,840 cases of this estate-grown Pinot Noir 2007 ($26.90). My tasting companion called this wine "yummy" and I had to agree. Nice and dark in colour, it has aromas of toast and cherries and raspberries, leading to flavours of cherries, raspberries, with a note of spice on the finish. The silky tannins give this that juicy finish that elicited the "yummy" comment. 88-90


Recently, I also tasted some of the other new or recent releases with Tom, including wines from 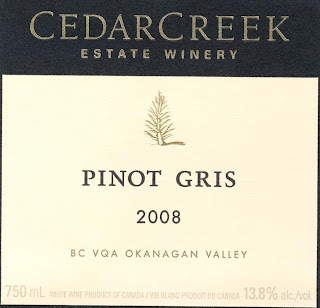 CedarCreek's Platinum (or Reserve) tier. These are more expensive because they are made fruit from low-yield vines and because they are aged in the most costly new French oak barrels in Tom's cellar.

One of the pending releases is the Cabernet Merlot 2007 ($18.90). This is another yummy red, a full-bodied blend that is largely Cabernet Sauvignon. The fruit flavours are lively, with spicy red berry characters. 88

The Merlot 2007 (also about $19 on release) is a dark, generous wine with aromas and flavours of blueberry and blackberry and with a satisfying, juicy texture. 89

Soon to be released is the Estate Syrah 2007 ($34.90), a classic expression of the variety - peppery fruits in the aroma, gamey flavours of deli meats modified with black cherry, iodine and spice notes. The wine is full without being heavy. 89

The Platinum offerings include a Platinum Reserve Malbec 2007, the winery's first. Not yet released, this is well worth waiting for. It is one of the best Malbecs I have tasted in British Columbia (or in Argentina). The wine begins with an aroma of spice, violets and lavendar that explodes from the glass. On the palate, there are flavours of black cherry, spicy dark plum and chocolate. The wine is rich and generous in texture with a satisfying finish that never seems to end. 95

Platinum Reserve Chardonnay 2007 ($29.90). This elegant wine begins with a biscuity aroma, along with citrus notes. The flavours include citrus, with a buttery note reflecting treatment in the cellar. 89-90

Platinum Reserve Pinot Noir 2006 ($39.90). No wine at CedarCreek shows more attention to detail than this elegant wine. It is made with four clones of Pinot Noir from two different vineyards where production per vine is managed with great discipline. The wine - 1,372 cases of it - spent 15 months in French oak. Tom uses barrels from five different coopers to achieve added complexity. The end result is a lovely wine with notes of cherry and raspberry and with the classic silky texture. 92

Platinum Reserve Merlot 2006 ($39.90). This wine has been in the market, and winning awards (including the Lieutenant Governor's Award for Excellence), for nine months. It is plump and rich in texture, with spicy berry aromas and with flavours of black currants and blackberries; there are chocolate and vanilla notes as well. 92

Platinum Reserve Meritage 2006 ($44.90). The winery released 1,246 cases of this wine in January. In this economy, it is still likely to be readily available. In your cellar, it has years of development ahead of it. The wine is a blend of 43% Merlot, 38% Cabernet Sauvignon, 9% Malbec, 8% Cabernet Franc and 2% Petit Verdot, aged 20 months in French oak (70% new). The wine is bold and complex, with aromas of spiced berries and coffee and flavours of black currants, plums, chocolate and vanilla. 92
Posted by JohnSchreiner at Goodgrog at 3:23 PM