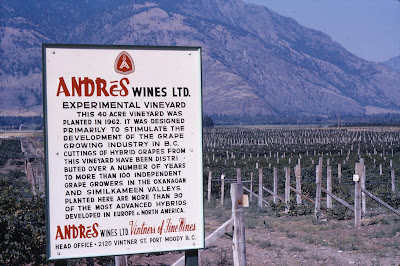 The irony is that Peller, then known as André’s Wines Ltd., took almost half a century to get over the disappointment of its very first British Columbia vineyard in the Similkameen Valley in 1962.

There is very little on the record about that vineyard. However, Ron Taylor, formerly a winemaker with the company, filled in some detail by passing along a photograph of that vineyard. To my knowledge, this has not been published anywhere until now.

Andrew Peller, now the largest Canadian-owned wine company, was founded in 1961 as André’s Wines Ltd. It built a winery in Port Moody, B.C., after Ontario regulators thwarted the company with unacceptable conditions. British Columbia allowed the winery to start with grapes from California while establishing its own domestic grape sources.

Founder Andrew Peller was astonished, as he recounts in his autobiography, that there were only 250 acres under vine in 1958, much of it committed to existing wineries. He thought that the Okanagan and Similkameen Valleys had “such a perfect climate” for vineyards. He also learned that existing wineries quickly tied up all the grapes when they found out that Peller planned to start another winery.

So he went looking for vineyard property, if only because “the establishment of a vineyard in the province would confirm my good faith when I tried to get a license for the winery.” He found a 40-acre property in the Similkameen Valley, not far from Cawston.

“The day I went to see the property, the heat nearly melted me,” he wrote in The Winemaker, his privately published memoir. “It was ideal weather for grapes.” He bought the property after Robert Bonner, the attorney general at the time, assured Peller that the teetotalling Premier W.A.C. Bennett could be persuaded to grant Peller a winery license.

The property was developed as an experimental vineyard, testing varieties that could be recommended to growers who would produce for André’s. (One of those growers was Major Fraser, then the owner of the Okanagan Falls farm that later became Hawthorne Mountain Vineyards.)

The Peller memoir does not say when Peller got rid of the Similkameen vineyard, nor why. John Bremmer, now an Okanagan grower who once managed André’s, suggests that the cost of operating the vineyard was too high. “It was virtually given to John Bibby, a milk truck driver,” Bremmer recalls. “Bibby then sold it to Brian Mennell, who pulled out the vines in the 1988 pullout and planted fruit trees.

Peller, meanwhile, shifted its strategy and supported the Osoyoos Indian Band in developing the Inkameep Vineyard. André’s played a role in importing vines from Europe (Riesling, Ehrenfelser and Scheurebe) in 1977 for Inkameep. The winery has been one of Inkameep’s most consistent customers every since.

After 2010, however, Vincor will get nearly all of Inkameep’s grapes. That appears one reason why Peller has moved to own vineyards of its own in British Columbia.

Peller returned to the Similkameen in 1997 when the company invested in a joint venture with a grower to develop the 70-acre Rocky Ridge vineyard, not far from its original property there. In 2007, the company took 100 percent control of this vineyard by purchasing the grower’s interest.

Peller also became the owner of nearly 200 acres on Black Sage Road, now called Sandhill Estate Vineyard, when it took over the Calona and Sandhill wineries in 2005.

And since 2007, Peller has planted 294 acres of grapes on land leased from Covert Farms near Oliver. As well, the winery entered into a grape purchase contract on the 80-acre Vanessa Vineyard in the Similkameen where vines were planted in 2006.

What a pity that Andrew Peller, who died in 1994, is not around to see how prescient he was.
Posted by JohnSchreiner at Goodgrog at 4:19 PM

An excellent blog. I worked behind the tasting bar at Red Rooster and most people don't know that Andrew Peller owns Red Rooster, Calona Vineyards and Sandhill in BC (and many more in Ontario). For three generations, the Peller family has had a huge impact on developing and promoting the wine industry in Canada - not only for themselves but many other wineries as well.