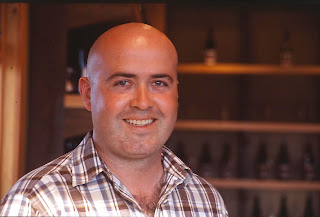 In a brief e-mail to friends and associates, Australian-born winemaker Marcus Ansems announced on November 12 that he has left Therapy Vineyards to run Hemispheres Wine Guild, a new wine importing club.

Marcus has been the general manager and winemaker at Therapy for the past three years, the latest stop in a varied Canadian winemaking career.

Born in 1974, he comes from the Australian family that formerly owned Mount Langhi-Ghiran, the producer of one of the top Australian Shiraz wines. After getting a winemaking degree from the University of Adelaide, Marcus launched a career as one of Australia's young flying winemakers. He did crushes in South Africa, Tuscany and the Rhone before joining the Creekside winery in Ontario in 1999. In four vintages there, he took Creekside from start-up to a rising star. He also handled the turnaround of Creekside's sister winery in Nova Scotia.

He returned briefly to Australia but was back in Canada in 2004, this time as the winemaker at Blasted Church in the Okanagan. He moved to Therapy the following year when it was starting up. As he left, the winery had just completed its 2008 crush, producing about 11,500 cases. In a matter of weeks, production moves into a new $2 million winery on Therapy's Naramata site.

The successor in Therapy's Cellar is Steve Latchford, a winemaker who has worked with the Jackson-Triggs winery in Niagara and recently with the Holman-Lang group of wineries in the Okanagan.

In his e-mail, Marcus that his new project "will allow me to travel to interesting wine regions with my family and bring back wine [for our members] not currently available in Canada."

He is president of Hemisphere Wine Club, which describes itself as a subscription-based co-operative. It is currently soliciting for members through its website, www.hemisphereswine.ca. For a $500 initiation fee (waived until January 1, 2009) and either monthly or annual payments, members will get quarterly shipments of imported wines chosen for them by Marcus. The quantities vary between eight and 16 cases a year, depending on what members sign up for.

The approximate model appears to be the Opimian Society, a wine club that was launched in 1973 and now claims a national membership of 18,000. The original general partner of the investor group that started Therapy Vineyards, John McBean, ran the Opimian Society in southern Alberta for many years. McBean and Therapy parted company this summer after an acrimonious dispute among the investors.

Posted by JohnSchreiner at Goodgrog at 1:08 PM

I've been trying to find more info on Hemispheres Wine Guild, but all I can find is what is their website. A Canadian wine club is long over due. Any members or winos with some input for me would be appreciated.