The Pentâge Winery at the south edge of the Penticton city limits has, for the most part, flown beneath the radar screen since opening in 2003. There are a couple of reasons why founders Paul Garner and Julie Rennie have maintained a low profile.

First, there has been no tasting room because, until recently, Julie continued to work at her day job in Vancouver (executive secretary to a top financier). Meanwhile, Paul was fully engaged with created a spectacular winery in 4,000 square-foot man-made cave in the mountainside. It has taken him at least two years but the cave was completed for the 2008 crush. There is a spot set aside for a wine shop.

Secondly, Paul’s real priority has been the development and nurturing of his vineyards, most of which now are producing good quality grapes. 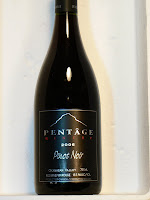 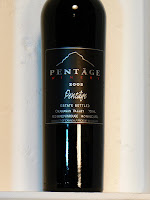 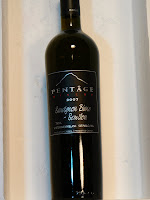 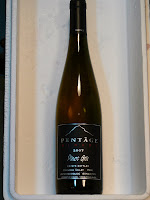 With most of the heavy lifting done, the owners of Pentâge now seem to have a little more time to tweak their marketing. This fall’s release included six wines spanning three vintages, including three 2007 whites. The latter come along just as 2007 Okanagan whites – most of which are released earlier in the year – are getting hard to find.
Not only are the wines good but, unlike some wineries, this one has its prices rooted in reality. The wines are well-priced for the quality, in some instances better than the international competition.
The release includes the winery’s flagship red, Pentâge 2005 ($29). The winery’s unusual name is rooted in the Greek word for five, pente, because there would be five varietals blended in the winery’s best wine. The 2005 is a blend of 45% Merlot, 43% Cabernet Sauvignon, 9% Cabernet Franc, 2% Syrah and 1% Gamay. The result is a wine with a powerful aroma of plums and spice and sweet fruit that just explodes from the glass. The flavours are a complex play of red currants, liquorice, chocolate and spice, laid over an earthy minerality. The structure is firm and robust. This wine drinks well now with decanting but can easily be cellared for another five years. 89 with potential to break into the 90s with age.
Pentâge Merlot 2005 ($25) begins with red berry aromas and flavours of currants, spice, plums and vanilla. The structure is robust with long ripe tannins and good concentration. It is a touch firm on the finish but that suggests the wine also has a fine potential to age. 88 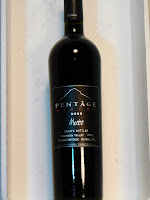 Pentâge Pinot Noir 2006 ($23) has an attractive ruby hue in the glass. The aroma begins with a touch of toastiness as well as cherry. This is a bold, even gamy, Pinot Noir, with red berry flavours and a hint of that earthiness that Burgundy lovers appreciate. 87
Pentâge Gewürztraminer 2007 ($18) is an excellent Alsace-style of this variety; a boldly fruity but dry wine ideal for serving with your Christmas turkey, at a lot less that Alsace gewürztraminer. The wine has spice on the nose, with flavours of citrus and lychee and a spicy finish. The texture is rich and the finish is long and satisfying. 90

Pentâge Sauvignon Blanc-Sémillon 2007 ($20). A wine with greenish tinges, it has an attractive grapefruit aroma. Not surprisingly, there are also grapefruit flavours, with a good backbone of acidity and minerals and with a dry finish. This tangy wine is a good food wine. 87

Pentâge Pinot Gris 2007 ($18). This is a lean, tangy Pinot Gris, with aromas and flavours of lemon and with bracing acidity, which is surprising since the 13.5% alcohol suggests the grapes were picked close to optimum ripeness. The wine is crisp and refreshing; it needs food to show off its best qualities. 86
The wines can be ordered on-line from the winery's website, www.pentage.com

Posted by JohnSchreiner at Goodgrog at 3:41 PM