Why some of the Best Wineries are not in Icon 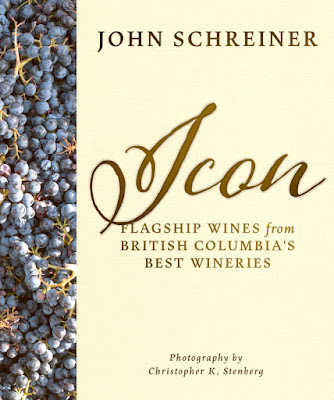 Since the release last month of my new book, Icon, I have heard from several wineries disappointed not to be included.

That is hardly surprising, given the full title of the book: Icon: Flagship Wines from British Columbia’s best Wineries.

Two wineries in particular that were unhappy to be left out are Terravista Vineyards and Ruby Blues Winery. They believe they are among British Columbia’s best wineries, and I totally agree.

Terravista’s owners, Senka and Bob Tennant, have a track record for making fine wines that goes back to their previous winery, Black Hills Estate Winery, which is in the book. Senka created that winery’s flagship wine, Nota Bene. And she has created another flagship at Terravista, a unique blend of Albariño and Verdejo called Fandango.

At Ruby Blues, owners Prudence and Beat Mahrer have a track record that includes seven Lieutenant Governor’s Awards of excellence – three at Red Rooster, their former winery and now four at Ruby Blues. The repeat wins with Viognier likely have established that as the flagship wine.

Other wineries I could consider including in a list of the best, or aspiring to be among the best, are  Hugging Tree Winery and Little Farm Winery in the Similkameen;  in the South Okanagan, the venerable Gehringer Brothers Winery as well as the promising Bordertown Vineyards and tiny VinAmité Cellars; Volcanic Hills, Mt. Boucherie and Little Straw Winery in West Kelowna; Kitsch Wines of Kelowna; and Larch Hills and Recline Ridge near Salmon Arm.

That is not even an exhaustive list. And I have not heard from most of them, or from their fans.

The reasons for not including wineries in the book are complex. But it begins with my initial concept (and working title): Iconic and Collectible Wines of British Columbia. The completed manuscript was in the hands of one publisher for nine months. When no book editor had been assigned to it after all that time, I withdrew it and gave it to TouchWood Editions in Victoria. TouchWood had an editor working on it almost immediately and eventually designed a more beautiful book than I had expected.

Because the introduction makes it clear this is a book about collectible wines, there was not much of a conversation about the title. I never wrote my own headlines when I was a journalist and I have only occasionally written the precise title.

The current title was developed by TouchWood early this year, after the manuscript had been completed and edited. It is a better title than the clunker I had in mind. Until I saw the physical book, the disconnect between my concept and the title did not sink in.

The title implies a significantly different screen than the one I had been using in two years of researching and writing. It was too late to go back and add more wineries, especially when the publisher had begun to push back at the size of the manuscript.

Wineries like Terravista and Ruby Blues were omitted because I did not think their superb flagship wines were candidates to be cellared for many years. Verticals of Fandango or Viognier certainly would be interesting but would one collect 10 vintages? I will be happy to be proved wrong, now that I have opened up the debate.

Often, wineries were omitted because I did not think their signature wines were likely to be collected. Who collects Siegerrebe, Ortega or Bacchus? These wines are best when fresh and bursting with fruit. Five years in the cellar will not improve them.

Some wineries were left out because the high turnover in winemakers or the change of ownership raised questions about their signature wines over the long term. Some promising wineries are so new that their flagship wines lack a track record. Perhaps the only exception to that screen was my inclusion of Little Engine Wines and CheckMate Winery, both newly opened. The debut wines and the skilled winemakers behind those wines inspire considerable confidence.

My judgments are not infallible. That should be obvious by now. I do regret that I was not alert to the disappointment caused by the provocative title of an otherwise superbly produced book by TouchWood Editions.

If any of the above inspires you to collect flagship wines not in the book, Terravista has just announced its new releases – and they are excellent.

Terravista Fandango 2016 ($25). Senka Tennant believes she was the first winemaker anywhere to blend Albariño and Verdejo grapes. The winery certainly was the first to plant these Spanish white varieties in the Okanagan. This is a lovely fresh wine with aromas and flavours of citrus and green melon. The tangy finish is quite refreshing. 92.

Terravista Albariño 2016 ($25). This is another white with abundant fruit aromas and flavours: nectarine, pear, apple, melon and citrus. 90.

Terravista Figaro
2014 ($24). This is a blend of 40% Roussanne and 30% each of Marsanne and Viognier. A classic white Rhone, this rich wine has aromas and flavours of herbs and stone fruit wrapped around a good mineral spice. 91.

Posted by JohnSchreiner at Goodgrog at 12:01 PM

You're absolutely correct John. These wineries need to accept that they aren't making a collectible wine that can be cellared. However, there are some of the BC icons I've tasted that I wouldn't buy again either. I look forward to getting a copy of your book!