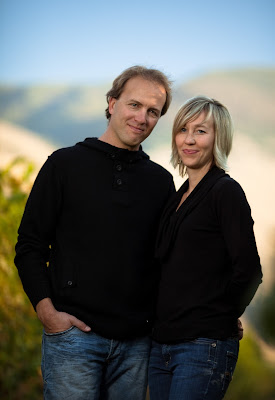 Orofino Vineyards, one of the leading wineries in the Similkameen Valley, has extended its portfolio this spring with a new varietal red and a rosé, both made with Cabernet Franc.

The rosé, aside from a limited offering to wine club members, is available just in the winery’s tasting room in magnum bottles.

Too much rosé at one time? Perhaps not. The wine has less than 11% alcohol. The winery figured that when a rosé is this light and refreshing, a 750 ml bottle would be insufficient.

The interest in rosé was sparked several years when Orofino’s owners, John and Virginia Weber, were in France with their cellarhand, Aaron Godard and his wife.

“We drank large amounts of rosé,” Aaron recalls. “A bottle never feels like it is enough, especially with the alcohol like that.”

Making rosé became feasible when Orofino added a new Similkameen vineyard to the growers it contracts. Called the Pozza Vineyard, it is a cool site on a northwestern-facing slope north of Keremeos. The upper half of the vineyard grows Cabernet Franc.

“We are very excited to have this vineyard,” Aaron says. “We did not know how it was going to turn out but we took a chance because the site looked really interesting, with potential to make this style of rosé and also the style of Cabernet Franc that we made.”

The rosé is made in Orofino’s typical minimalist style. “Our flavour focus is to keep it minerally and more herbaceous, to bring out the Cabernet Franc characteristic,” Aaron says. “We wanted the colour to be light. We let it sit on the skins for seven hours, let in ferment in tank and moved it into bottle in December. The idea is drink it now and drink a magnum of it. It is a perfect summer wine. I love it with a good omelette. That is very south of France.”

The 2016 Cabernet Franc red is reminiscent of a Loire red, light in body and with herbaceous flavours.

The grapes were partially fermented with wild yeast. Fermentation and aging was in concrete tanks and neutral barrels for six months. The wine was the bottled unfiltered and has been released when the wine is still fresh and vibrant.

“All of our reds are unfiltered,” Aaron said as we tasted the Cabernet Franc together. “You can see this has a little haze. We decided to leave it that way. It is just an aesthetic thing. A little bit cloudy has never bothered us. It takes a bit of explaining in the tasting room. We have to stick to our guns if we want to make sure our wines are low intervention.”

The releases this spring also include two other reds from the 2016 vintage made deliberately in a quaffable style for early release. One is a wild ferment Syrah and the other is a Gamay Noir.

The soft tannins of these wines reflect, in part, the winery’s use of small concrete tanks and/or neutral oak barrels for fermenting and aging the wines.

“We ferment this in open-top fermenters and then press it into our concrete tanks,” Aaron says of the Syrah. “It is fermented with natural yeast. It stays in concrete about five or six months. The idea with the concrete – which are small potable water tanks – was inspired by some wine we drank in France that was often stored or even fermented in concrete.”

Wines made in small concrete tanks are approachable early, the winery has found. “The idea is to release something that is quite drinkable right away. It has a lighter texture to it but it still has those things we look for in Syrah – gaminess, pepper, tons of minerality,” Aaron says.

For traditional palates, the winery also has a Syrah aged 20 months in oak. A fine wine, but not part of the spring release wines.

Here are notes on those wines.

Orofino Moscato Frizzante 2016 ($25). This carbonated, aromatic sparkler is the perfect brunch wine with its floral aroma and its flavours of peach and citrus. The finish is crisply dry and refreshing. 90.

Orofino Hendsbee Vineyard Riesling 2015 ($22). This dry, age-worthy Riesling has developed that hint of petrol in the aroma so beloved by Riesling lovers. There also are aromas and flavours of lime, along with a mineral spine. 91.

Orofino Scout Vineyard Riesling 2015 ($22). This wine begins with aromas of lemon and lime, leading to flavours of lime and pink grapefruit, with a slate minerality. The softer acidity give the impression that the wine is off-dry. 90.

Orofino Pozza Vineyard Cabernet Franc Rosé 2016 ($40 for a magnum). This rosé (with 10.8% alcohol) is sold only in magnum in the Orofino wine shop on the theory that one bottle of this light, refreshing wine is not enough. It is a dry rosé with a pale salmon pink hue, strawberry aromas and flavours of strawberry and raspberry. 88.

Orofino Gamay 2016 ($23). A wine with a brilliant ruby hue, it begins with aromas of cherries. There is also an herbaceous hint in the aroma. On the palate, there are flavours of cherry and plum and notes of pepper. There is a full, almost meaty, texture. 90.

Orofino Pozza Vineyard Cabernet Franc 2016 ($23). This wine is quite reminiscent of a good Loire red. There are herbal and raspberry notes in the aroma, leading to bright flavours of raspberry and blackberry. The alcohol is a moderate 12.1%.

Orofino Wild Ferment Syrah 2016 ($29). Fermented and aged in concrete tanks, this is a dark, juicy wine with flavours of plum, black cherry, figs. There is a hint of spice and white pepper on the finish. 89.

Orofino Home Vineyard Pinot Noir 2014 ($32). An elegant wine, this is made with estate-grown grapes from 27-year-old vines. The wine, which was aged in oak for 16 months, has aromas and flavours of cherry and dark red fruit. The texture is developing the classic silky character of the variety. 90.

Orofino Red Bridge Red 2014 ($25). The blend is 70% Merlot; the remainder is 10% each of Cabernet Sauvignon, Syrah and Petit Verdot. The wine begins with aromas of cassis. On the palate, there are flavours of cassis and black cherry. The long ripe tannins add to the generous and satisfying personality of this wine. 91.

Orofino Scout Vineyard Cabernet Sauvignon 2014 ($29). Dark in hue and bold in flavour, this wine begins with dusty mineral notes on the nose, opening to cassis with breathing. On the palate, there are flavours of figs, black cherry and chocolate. Twenty months barrel aging have given the wine a polished, elegant texture. 92.

Orofino Beleza 2014 ($34). The winery’s flagship red, this is 60% Merlot, 20% Cabernet Sauvignon and 10% each of Cabernet Franc and Petit Verdot. The wine was aged 20 months in French and American oak and give two more years’ bottle age before release. It begins with aromas of black cherry and vanilla. On the palate, there are flavours of black currant, black cherry, espresso and dark chocolate. 94.
Posted by JohnSchreiner at Goodgrog at 10:39 AM