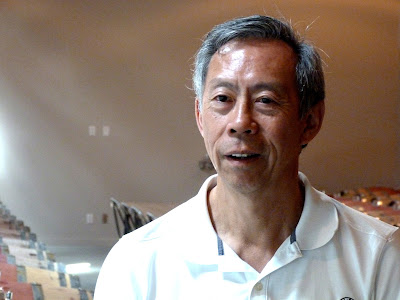 And he goes out on a high. Howard Soon Red 2014, an elegant and powerful Meritage with grapes from Phantom Creek Vineyards, is the red wine of the year at the 2017 All Canadian Wine Championships.

“As a fellow winemaker, I will remain in awe at his depth of knowledge, dedication to the craft and unwavering passion toward never compromising wine quality,” Craig wrote in a statement.  “Indeed, Howard has served the wine consumer well and has touched so many industry professionals along the way it’s too numerous to count. Howard’s legacy continues on with Sandhill and with the many winemakers he has mentored over the years, all respecting his experience, wisdom and dedication to their learning.”

Howard was born in 1952 in Vancouver, the grandson of a shopkeeper who emigrated from southern China in the 1880s. Howard graduated in biochemistry from the University of British Columbia in 1974. After five years in the brewing industry, he joined Calona in 1980 as a quality control supervisor, became assistant winemaker in 1981 and subsequently was promoted to chief winemaker.

Howard has been the winemaker for Sandhill Wines since that winery’s inception in 1997. Sandhill stands apart from most wineries because it is dedicated to making single vineyard wines exclusively. Each year those wines put the spotlight on six to eight distinctive terroirs. Craig suggests this defined the idea of terroir in British Columbia.

Sandhill has won an impressive number of awards, including at least nine at the Lieutenant Governor’s Award of Excellence. Since 2004 Sandhill Wines have won about 100 gold or double gold medals in regional, national and international competitions. Just one example: double gold and best in category with a 2011 Small Lots Chardonnay at the Chardonnay du Monde Competition in .

The BC wine industry gave Howard the Founder's Award in 1998. In 2015, he received the Vancouver Wine Festival’s 'Spirited Industry Professional' in 2015.

In his typically modest fashion, Howard did not claim complete responsibility for the Sandhill single vineyard strategy. He described the history to me in a 2005 interview:

“I can’t claim credit for it. I think it was collusion between us and marketing. Perhaps some wineries don’t have the communication channel between marketing and production. We do. We have always had that because we are brand focused.

“We had the Artist Series [at Calona]. I kept wanting to slip the grape growers in on the back label. It was important to me. I felt you’ve got to give credit to the guys who are growing the grapes. Marketing said, Howie, that’s not the right place for it.

“At the same time, Burrowing Owl Winery started up. We were partners with Jim Wyse. Ironically enough, in a parallel track, we made the first vintage, 1997, for Burrowing Owl in our winery [Calona], working with Bill Dyer.

“At the same time, marketing had the concept that we needed to push up into the premium area. Artist Series is more retail. We need something that is more premium, more aimed at restaurants. They asked what we could do. I said, one of the simplest ways of going premium is single vineyard. Let’s give credit to our growers.”

The first Sandhill wines were made with fruit from the Sandhill Estate Vineyard, then owned with Burrowing Owl Vineyards (a partner later dissolved). Over the years, other premium vineyards were also enlisted for Sandhill.

Arguably, the gem was Phantom Creek Vineyard, a seven-acre parcel on Black Sage Road planted and farmed by Richard Cleave. He is as iconic as a grower as Howard is legendary as a winemaker.
“I have known him for years, ever since he was growing grapes at Pacific Vineyards,” Howard told me in 2005. “That is now where Burrowing Owl is. Dick got through the free trade period [when most Pacific Vineyards was pulled out] by growing market vegetables. He was growing peppers and stuff. He said, ‘Howie, I’ve got my own vineyard.’ He had started growing grapes and selling them to home winemakers. They were pretty good grapes. Even I didn’t realize how good they were.”

Richard asked Howard to make wine for him.  “I said I’ll see what I can do,” Howard recalled. “His first fruit was 2000 – three years after the first Sandhill wine [from Burrowing Owl]. I made some Syrah, one barrel of Syrah, just under 20 cases. It was superb Syrah, but it was only one barrel. But we realized that Dick had something going.” Phantom Creek became the second single vineyard in the Sandhill portfolio and, ultimately, the vineyard that grew some of the best Sandhill wines.

The vineyard was acquired early in 2016 by a Richmond-based Chinese entrepreneur who also acquired Harry McWatters’s Sundial Vineyard on the other side of Black Sage Road. A new winery called Phantom Creek is now under development there.

“I believe terroir is a quest,” Howard said in 2005. “It is a process, which is the way we do our wines, too. We’re always trying to make better wines, so we focus on process, not outcome.  We are always doing the best with everything that we do, then the wine will take care of itself. Really to me, terroir is the expression of the fruit quality. What the grape is giving you, that’s what terroir is to me – a true expression of what is in the fruit.”

I was able to taste the Howard Soon Red 2014 earlier this year and wrote about in a blog in March on Sandhill wines. Here is my note on the wine:

Howard Soon Red 2014 Phantom Creek Vineyard ($60 for 73 cases). This is 71% Cabernet Sauvignon, 16% Petit Verdot, 8% Malbec and 5% Merlot. This wine displays the triumphal achievement of a veteran winemaker with grapes from a superior vineyard in the Okanagan’s best vintage (so far). It begins with seductive aromas of black currant, black cherry and vanilla. The palate is rich and intense, with ripe dark fruit, black cherry, black currant ands vanilla. The lingering finish has notes of dark chocolate and spice. 94.

Posted by JohnSchreiner at Goodgrog at 4:08 PM