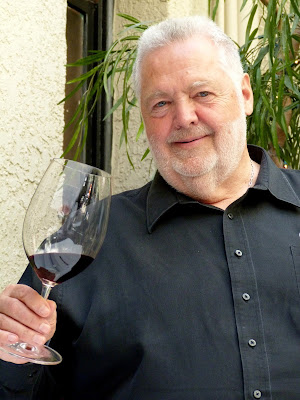 Perhaps the most famous wine made by Sumac Ridge Estate Winery, which Harry McWatters founded, was Steller’s Jay Brut.

This multiple award-winner was first made in 1987. Over the years, Harry sabered countless bottles of Steller’s Jay. He liked to quip that sparkling wine was what he drank while deciding what wine to have for dinner.

Sumac Ridge eventually was acquired by Constellation Brands.  Harry remained a director for some time until retiring in, memory serves, 2008. Then, his access to Steller’s Jay was limited to wine stores.

Harry did not stay retired all that long, if at all. Now, under a holding company called Encore Vineyards, he manages three brands – Time, McWatters Collection and Evolve Cellars.

Sometime next spring, those wines will be required to help celebrate the opening of Harry’s new winery in downtown Penticton.

Initially, Harry had begun to build his new winery on the Sundial Vineyard on Black Sage Road; construction started in 2015 with the pouring of the barrel cellar. As was widely reported earlier this year, Harry accepted an offer for the property and the nascent winery in April, 2016. The new owners will complete the winery this summer, having made 2016 wines for their new label, Phantom Creek Estates. The design is even grander than the one begun by Encore Vineyards.

Ever fleet on his feet, Harry (and the Encore investors) bought a former movie theatre in downtown Penticton last summer. Renovations are ongoing, with plans to open a wine shop in the spring. That’s why Harry needed new sparkling wines (aside from having something to drink before dinner).

I have not been able to find technical specifications for the wines. I am guessing they are fermented in tank, given how long it takes to complete bottle fermenting bubblies. The current vintage of Steller’s Jay is the 2009. This is a wine that, like Champagne, spends four or five years on the lees before being disgorged.

There are other methods of making good sparkling wine, as these two wines demonstrate, that are faster and don’t tie capital as long. By fermenting with encapsulated yeast in the bottle, the winemaker can accelerate the process. There is no need to spend a month or so riddling the bottles. When the yeast has done its work, one simply inverts the bottle to collect the beads of yeast in the neck prior to disgorging.

One can always carbonate a wine but that is done only for the cheapest of sparkling wines. Wines fermented in pressure tanks are much better and the bubbles last longer. Most Prosecco, which has become wildly popular, is made this way. I note that the Evolve wines are priced to compete with Prosecco.

The current releases from the Encore stable include two red Meritage wines and an outstanding Syrah.

Evolve Pinot Blanc 2015 ($14.99). This wine begins with Granny Smith apple aromas leading to flavours of apples, pears and honeydew melon, with a spine of minerals. The wine has good weight on the palate, with a crisp and dry finish. 88.

Evolve Effervescence NV ($19.99). This is a blend of Pinot Blanc and Chardonnay. The wine has fruity aromas and flavours and presents a display of active bubbles in the glass. The hint of residual sweetness is well balanced, resulting in a refreshing, easy-drinking sparkling wine. 90.

Evolve Pink Effervescence NV ($19.99). This is a blend of Pinot Blanc and Merlot. It is a festive wine in the glass, with a pink blush and with active bubbles. There are toasty and fruity aromas, leading to flavours of strawberry. The bubbles add to the creamy texture. 90.

McWatter’s Collection Meritage 2013 ($25 for 550 cases). This is 57% Cabernet Sauvignon, 30% Merlot and 13% Cabernet Franc and was aged 15 months in French oak barrels. It begins with aromas of cassis and cedar, leading to layers of flavour – black cherry, plum, fig, espresso and spice – framed by the oak. With Cabernet Sauvignon taking the lead, this is a Meritage for aging. 92.

Time Syrah 2013 ($35 for 200 cases). This is a bold wine and was aged a year in French oak to polish the full-bodied texture. Dark in colour, it begins with aromas that mingle pepper, herbs and deli meats with black cherry. On the palate, there are rich flavours of plum, fig, blackberry, vanilla and spice, punctuated by black pepper. 93.

Posted by JohnSchreiner at Goodgrog at 12:23 PM