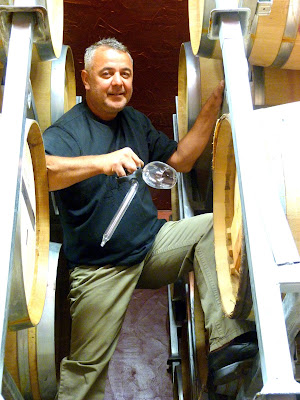 Each of these reds has 15% alcohol. That is at the upper range for Okanagan reds, most of which come in at 13.5% to 14.5% alcohol, if the labels can be believed.

Wineries have a leeway of 0.5% plus or minus. One winemaker who used that leeway to understate a high-alcohol Chardonnay once explained: “Sometimes, when we have to reduce the alcohol, we let the printer do it!”

I am not suggesting that is what Adrian Cassini is doing. If the alcohol levels were higher even than the label states, consumers would notice a bit of heat on the finish. No heat is evident in Adrian’s wines. The wines are so rich and concentrated that they handle the alcohol.

It is clear that he set out to deliver the maximum ripe flavours in the three reds that come in at 15%. By low-tonnage production and by hanging the grapes late into the season, he succeeded very well indeed. Production of each wine is limited with Cassini wine club members first in line. The wines are a good argument for joining that club. They can also be ordered directly from the winery.

Adrian’s style recalls the slogan of the Ravenswood Winery of California: “No wimpy wines.” That winery admits to 15.1% alcohol on several of its muscular Zinfandels.

Since Cassini Cellars opened in 2009, Adrian has hosted me to several tastings, including barrel and cellar sampling. I once described his exuberant style as con brio, a musical term loosely defined as “with vigor.” That perfectly describes the three reds reviewed here,  all of which are single vineyard wines.

Cassini Cabernet Franc Collector’s Series 2013 ($34 for 295 cases). This wine has five percent Merlot in the blend. The wine begins with aromas of blackberry, black currant and pepper. The aromas are echoed in the flavours, along with black cherry and vanilla. The muscular texture has been polished by aging 24 months in new barrels (80% French, 20% American). 92.

Cassini Nobilus Merlot Collector’s Series 2013 ($40 for 187 cases). The wine, which was aged 24 months in new French oak, begins with appealing aromas of vanilla mingled with black cherry and raspberry jam. On the palate, there are flavours of black cherry, vanilla, cedar and chocolate. The tannins are long and ripe but with grip. This wine will age superbly. 92.

Cassini The Aristocrat Cabernet Sauvignon 2013 ($40 for 290 cases). This wine was a selection of the best eight barrels of Cabernet Sauvignon in the cellar from a total of 45 barrels. This is a bold, dark-coloured wine, beginning with aromas of cassis, black cherry and vanilla. On the generous palate, there are flavours of figs, dates, black cherry and chocolate framed by spicy oak on the finish. The winery suggests this wine can be cellar to 2025, although it is drinking well already. 93.
Posted by JohnSchreiner at Goodgrog at 9:01 AM