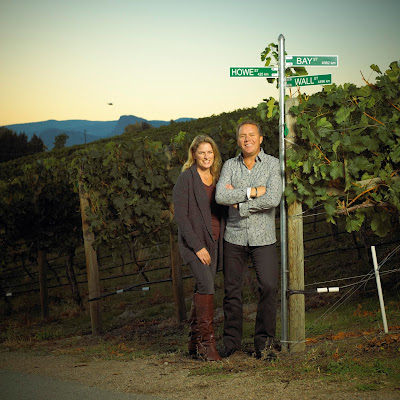 In what looks like another step in the consolidation of Okanagan wineries, Arterra Wines Canada has just announced the purchase of Laughing Stock Vineyards.

Peller and Arterra are Canada’s two biggest national wine companies. Now owned by the Ontario Teachers Pension Fund, Arterra formerly was the Canadian arm of U.S.-based Constellation Brands and, prior to 2007, was Vincor International Ltd.

Arterra, which is headquartered in Mississauga, already operates a group of wineries and brands in British Columbia. These include Jackson-Triggs, Inniskillin Okanagan, Sumac Ridge, Black Sage Vineyards and See Ya Later Ranch. It also has a 50% interest in Nk’Mip Cellars. And it operates more than 1,000 acres of vineyard in the Okanagan.

Laughing Stock gives Arterra control of a boutique producer with a strong following for its premium wines, much as Peller’s purchase of Black Hills brought an iconic producer into that company.

Laughing Stock founders David and Cynthia Enns will continue to be involved with the winery. “We started Laughing Stock Vineyards to create a boutique Naramata Bench winery,” David said in a statement. “After a decade and a half, we have reached the tipping point both in terms of scale and demand. We made a decision to partner with Arterra because of their commitment to maintaining the quality and the integrity and quality of our wines and their solid history in the Okanagan.”

For background on Laughing Stock, here is an except from my recent book, Icon: Flagship Wines from British Columbia’s Best Wineries.

Before David Enns blended the 2003 debut vintage of Portfolio, he made what he calls “the pilgrimage” to Bordeaux. In two weeks, he tasted about 1,000 red wines to determine the style that would serve, to some degree, as the model for Portfolio. “When you start out, you have got to have a style,” David maintains. “You have to stick to it for a number of years.” That discipline worked for him, making Portfolio a widely collected Okanagan red blend.

David and his wife, Cynthia, were successful investment consultants in Vancouver when, in 2002, they bought a newly planted 2-hectare (5-acre) vineyard on Naramata Road for a future winery. They called it Laughing Stock, because they would embarrass themselves with their clients if it flopped. After all, David’s winemaking was limited to two vintages in his basement with Washington state grapes, when he processed one ton of Cabernet Sauvignon in 2001 and two tons of Syrah in 2002.

David and Cynthia made the debut 500 cases of Portfolio in 2003, after their viticulture consultant told them there might never be a better vintage with which to launch. It had been the hottest season in a decade. “The grapes were crazy ripe, which translated into quite high alcohol in the wines,” recalls Cynthia. The Portfolio 2003 had 15.1 percent alcohol, although due to a printing error, the label read 13.8 percent.

The greatest improvements have come with Laughing Stock farming its own vineyards. “Our original business plan was that we were going to buy a lot of our fruit so we don’t have to become farmers,” David says. “Well, we quickly realized that if you want good wine, you need good fruit—and you have to grow it.” In 2007, the year after they sold their investment business, David and Cynthia, who now manages the vineyards, bought their Perfect Hedge Vineyard: 9 hectares (22 acres) on the Osoyoos East Bench. About half of Laughing Stock’s grapes are now from Osoyoos, while the other half are from Naramata. Perfect Hedge grapes—Cabernet Sauvignon, Merlot, and Malbec—have added flesh and rich flavours to Portfolio since the 2008 vintage.

Laughing Stock’s total production is limited to about 6,000 cases a year, so that David can practise detailed, hands-on winemaking. “When I am making Portfolio, I have four or five Merlot vineyards, two or three Cabernet Sauvignon vineyards, a couple of Cabernet Francs, a couple of Malbecs, and one source of Petit Verdot,” he says. Fermented as individual lots, these come together during the blending trials about 15 months after vintage. When the premium Portfolio blend has been decided, it spends at least three more months in barrel, all of it French oak. Wines that do not make it into Portfolio are blended for an early-drinking wine called Blind Trust Red.

Portfolio has seen continual improvement through additional  sources of grapes, better winemaking equipment, and refined selection of barrels. Vintage variations are less dramatic than might be expected, given growing conditions. In 2011, when the degree days[AG4]  were the lowest in Laughing Stock’s history, David made a wine good enough to win a Lieutenant Governor’s Award of Excellence. “My goal is to make better wine every year, based on what Mother Nature gives us,” he says.


Posted by JohnSchreiner at Goodgrog at 1:54 PM