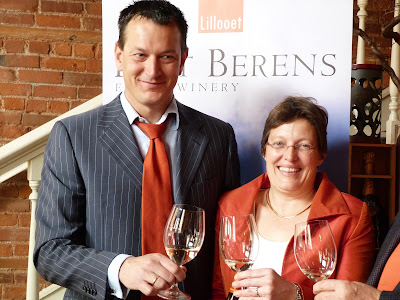 This fall’s releases from Fort Berens  Estate Winery at Lillooet feature six wines – all from the 2015 vintage.

That was one of the hottest vintages so far this century, both in the Okanagan and the Similkameen Valleys (where Fort Berens buys some fruit) and in Lillooet.

At Lillooet, the yield was 40% lower than in 2014. The winery’s note did not elucidate on why but it is safe to speculate that the vines were conserving energy in a year of heat and water stress.

The winery’s bankers might not have been happy with the reduced production. The vines, however, delivered grapes with more flavour and intensity, to the delight of consumers.

Rolf de Bruin, the co-founder of Fort Berens, added: “It was also a vintage that continued to provide a lot of learnings for our team.” I’ll bet it was!

His note adds that the 2017 vintage “in a lot of ways … is similar to our 2015 vintage, so we are anticipating another brilliant vintage from our estate grown fruit.”

It might be added that the 2016 vintage was abundant in production and high in quality.

It is apparent that Lillooet can no longer be considered a trial region for vineyards, as was the case a decade ago when Dutch emigres Rolf and his wife, Heleen Pannekoek, decided to put down roots in the area.

This was the first vintage when Fort Berens received Chardonnay and Pinot Noir from recently established growers in the Lillooet area. Fort Berens viticulturist Megan De Villiers and her team also work with these grape growers.

Next spring, Fort Berens will double its estate vineyards by planting another 20 acres at Lillooet. “We factored in all our learnings over the past few years,” Rolf says.

Fort Berens White Gold 2015 ($25.99 for 190 cases). This wine is made entirely with Chardonnay grown in the winery’s Lillooet vineyard. To take the complexity of this wine up another step, half is fermented with native yeast, half with commercial yeast. The wine was then aged six months in new French oak barrels, with partial malolactic fermentation and lees stirring twice a month. The wine begins with aromas of citrus and pineapple, along with toasty oak. On the palate, there are flavours of marmalade and tropical fruit. The oak is subtle, giving the finish hints of vanilla. 91.

Fort Berens Pinot Noir 2015 ($24.99 for 710 cases). This wine is made with the four clones of Pinot Noir grown in the winery’s Lillooet vineyard. The wine was aged nine months in French oak barrels (20% new). Hints of toasty oak on the nose and the palate mingle with cherry and red berries. The vibrant fruit is bright and the texture is full. 91.

Fort Berens Cabernet Franc 2015 ($24.99 for 638 cases). The winery describes this as its “flagship red” – presumably meaning flagship red single varietal. Grapes come both from Lillooet (the primary source) and the Okanagan. The wine, which was aged 10 months in French and American oak barrels, has the variety’s classic (and appealing) brambly black berry and red currant aromas and flavours, along with notes of cherry on the palate. A touch of toasted oak adds to the complexity of this full and satisfying red. 91.

Fort Berens Meritage 2015 ($23.99 for 644 cases). This is a blend of 60% Merlot, 21% Cabernet Sauvignon and 19% Cabernet Franc, with 40% of the grapes grown at the estate and the rest from Okanagan and Similkameen vineyards. The wine was aged in both French and American oak barrels. The wine is full and juicy on the palate, delivering gobs of sweet berry flavours – jammy cherries and blueberries. The oak expresses itself with toasty aromas and vanilla on the palate. 90.

Fort Berens Meritage Reserve 2015 ($27.99 for 595 cases). This is 56% Merlot, 27% Cabernet Sauvignon and 17% Cabernet Franc. This wine, the winery’s first reserve Meritage, was a selection of the best barrels. The texture seems a little fuller than the regular Meritage. The wine has flavours of black cherries, black currants and chocolate. Long ripe tannins contribute to its plump mouthfeel. 92.

Fort Berens Red Gold 2015 ($44.99 for 154 cases and 48 magnums). Here is a wine with power and heft. It is 43.6% Cabernet Franc, 30.6% Cabernet Sauvignon and 25.8% Merlot, with grapes sourced from the south Okanagan, from the Similkameen and from the estate vineyard. The power – the alcohol is 15.5% - is drying a substantial quantity of the Cabernet Franc grapes for a month before fermentation. The grapes lose 30% of their water, becoming somewhat raisined, which concentrates flavours and sugars. The wine’s bold aromas and flavours feature black cherry, blackberry, figs and vanilla. 94.

Posted by JohnSchreiner at Goodgrog at 4:53 PM