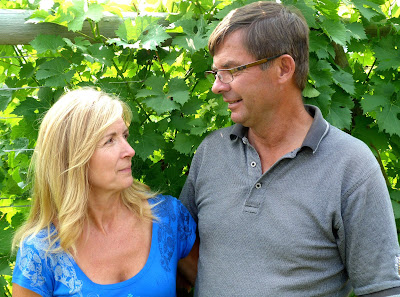 One of the most remarkable vineyards in the North Okanagan is The Rise, on a ridge just west of Vernon, with a sunbathed southern exposure.

The original seven acres were planted in 2005 with Pinot Noir and Riesling. More acreage may have been planted since then.

The intention at the time was to develop a 35,000-case winery with dramatic underground cellars. It was meant to be part of a luxury housing development. The 2008 recession stalled the development and the winery never proceeded.

The vineyard, however, continues to produce superb grapes which have been purchased by several producers of premium wines. Ex Nihilo Vineyards in Lake Country currently has taken a hand in managing the viticulture here and, after making wines from the grapes, has been in talks to buy part or all of the property.

One of the other wineries that has purchased fruit from The Rise is Privato Vineyard & Winery of Kamloops, operated by John and Debbie Woodward. Pinot Noir from the 2012 vintage at The Rise has produced Privato’s first “Grande Réserve” which is just being released.

In his notes on this wine, John recounts that the 2012 vintage produced “exceptional” grapes. “After fermentation, they were gently pressed and transferred to French oak barriques to age for 18 long and patient months,” he writes. “At the very end of 18 months there is no doubt that the grapes sourced from The Rise Vineyard … were exceptional and worthy of a Grand Reserve wine. Eight of the best barriques were earmarked and reserved for additional aging. True to European standards a Reserve Wine must age three full years.”

The wine is now being released, with a total of 42 months in barrel and bottle. It is one of the most powerful Pinot Noirs to date in British Columbia. Only 200 cases have been made.
John, who was born in Kamloops in 1954, is professional forester; Debbie is a certified general accountant. Since 1987, they have operated a tree nursery on an 80-acre farm on the banks of the North Thompson river.

A casual interest in wine – John had been a home winemaker - was transformed some years ago by a vacation in Italy during crush.

In 2010, they planted three acres of vines – Pinot Noir, Chardonnay and one row of Maréchal Foch. John reacquainted himself with winemaking by making two barrels of wine in 2010 with consultant Gustav Allander of Foxtrot Vineyards.

Privato’s first commercial vintage in 2011 comprised about 600 cases of Pinot Noir and, Chardonnay.  In 2013, when Gustav stopped consulting, the Woodwards turned to New Zealand-trained Jacqueline Kemp (winemaker at Moraine Vineyards) for guidance on sourcing Okanagan grapes and making wine. John, however, signs off as the winemaker of record.

After releasing their wines through a web site and to restaurants, the Woodwards opened a wine shop at Privato in 2013. They had resisted the idea initially, thinking their farm and vineyard are too far off the beaten path. In fact, now that four wineries have opened in the vicinity of Kamloops, with an association promoting them, a surprising amount of wine tourism has developed.

The result is that several of Privato’s wine are already sold out.

Here are notes on most current releases.

Privato Woodward Collection Chardonnay 2013 ($25.99). Lightly and subtly oaked, this is an elegant wine. It begins with buttery and citrus aromas. On the palate, there are bright citrus flavours. The finish is persistent. 91.

Privato Rosé 2015 ($18.99 ). This is a crisp and refreshing wine with aromas and flavours of raspberry and cranberry and with a dry finish. 89.

Privato Pinot Noir Privato Collection 2013 ($23.99). This is a silky Pinot Noir in a style sometimes referred to as feminine. It begins with aromas of strawberries lightly accented with oak. On the palate, cherry and strawberry flavours mingle with lightly toasted oak. The wine is a delicious charmer. 90.

Privato Pinot Noir Woodward Collection 2012 ($32.99). This presumably the barrels that were not selected for the reserve, since the wine is not quite as big. It begins with aromas of strawberries, delivering spice, cherry and chocolate on the palate. 91.

Privato Grande Réserve Pinot Noir 2012 ($42.99 for 200 cases). Deep in colour, this is a full-bodied wine that, in spite of its silky texture, has an intriguing tension on the palate between the intense dark fruit – plum and cherry – and the toast and vanilla of the oak. The wine is built to cellar another seven to 10 years. For immediate consumption, decanting is advised. 92-94.

Posted by JohnSchreiner at Goodgrog at 9:34 AM