Lariana Cellars: have you heard of them? 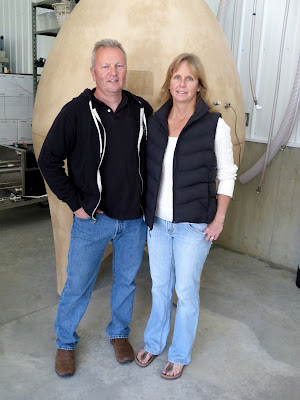 Unless you have read this blog regularly, you probably have not heard of Lariana Cellars. I run into people all the time who admit that to me.

Perhaps it is a case of “out of sight, out of mind.” To find the winery, you need to drive toward the Canada-US border crossing at Osoyoos. If you get caught up with American Immigration, you have gone too far.

Just a few yards this side of entering the presumptive Kingdom of Trump, turn left at Second Avenue and follow it as it winds by the eastside of the border buildings. Bear left again and watch for the winery on the north side of the street, at 8310 2 Ave, Osoyoos.

I would also suggest calling ahead for an appointment (250.498.9259). This is a very small winery run by Carol and Dan Scott and they are likely to be engaged in their other business, a 75-unit recreational vehicle park on Osoyoos Lake. But they are a friendly and accommodating couple.

That may sound like a lot of trouble, but it is well worth it. Lariana’s Viognier is, arguably, the best in British Columbia. The two red wines are also impressive, and worth the price.

Here is an except from John Schreiner’s Okanagan Wine Tour Guide  to provide a little more background on the winery.

The winery name is a tribute to Larry and Anna Franklin, the parents of Carol Scott, who owns this winery with her husband, Dan. Larry Franklin was a shareholder in Shannon Pacific Vineyards, a large Black Sage Road vineyard until it was broken up after the 1988 vine pull out. During one vintage, Carol was assigned to keep the starlings away from the grapes with a bird gun. In another vintage, she helped pick grapes. She also hauled grapes to the family home in Burnaby where her father made wine.

Those experiences planted the seed for this winery even as the Scotts, both born in 1963, pursued careers in Burnaby. Don is a millwright while Carol has been a travel agent. They moved to Osoyoos in 1989, taking over a campground that her parents had established in 1968. The recreational vehicle sites, which they still operate, take up the lakeside half of the four-hectare (10-acre) property. The vineyard, which began to replace apple and cherry trees in 2007, occupies the top half.

Planting vines was Carol’s passion. “It took a few years to get Dan on board,” she admits. “It was kind of a dream to plant grapes. I finally convinced Dan and we cleared the land. It was a new tractor that convinced him.” They planted Viognier, Cabernet Sauvignon and Syrah. When the hard winters of 2008 and 2009 mortally damaged the Syrah, that variety was replaced with 2,500 Carmenère vines. Now, they purchase Syrah for Lariana’s red blend.

The Scotts, who intend to limit production to about 1,200 cases a year, built a plain Jane winery with a modest tasting room. They invested instead in top flight equipment, including the California-made concrete egg in which Carol and consulting winemaker Senka Tennant make Lariana’s Viognier.  Stainless steel tanks are half the price but whites made in concrete eggs – several larger Okanagan wineries have them – show richer texture.

Here are notes on the three current releases.

Lariana Cellars Viognier 2015 ($25 for 215 cases). This is fermented in the winery’s 1,800-litre concrete egg (and in one neutral French oak barrel). It begins with fruity aromas, including a surprising but pleasing note of pineapple and rhubarb. On the palate, the flavours are lush and tropical, with notes of lychee and peach. The wine is refreshing, dancing lightly on the palate, with absolutely no heat from the 14.3% alcohol. This is a tour de force, a benchmark for Okanagan Viognier. 93.

Lariana Cellars Carménère 2013 ($40 for 120 cases). This wine is new in the Lariana portfolio. This wine has been aged 20 months predominantly in French oak. The fans of Okanagan Carménère will appreciate this swaggering example, with peppery aromas and flavours surrounding the plum, black cherry and prune notes. The wine is savoury, with long ripe tannins and a persistent finish. 92.

Lariana Cellars Thirteen 2013 ($45 for 555 cases). The blend is 68% Cabernet Sauvignon, 20% Syrah and 12% Carménère. The wine begins with aromas of cassis lightly touched with mint. On the palate, the flavours are savoury and earthy, with notes of black cherry, black currant and black coffee, mingling with peppery dark chocolate and polished tannins on the finish. 92.

A note on the name of the wine. This is Lariana’s flagship red; it is named for the vintage. The previous release was Twelve and the next release will be Fourteen.
Posted by JohnSchreiner at Goodgrog at 1:52 PM